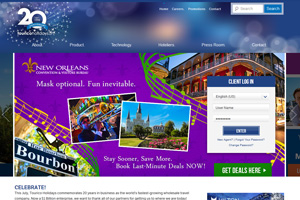 Travel wholesaler Tourico Holidays is eyeing further expansion in the UK market with two new programmes offering better profit margins on hotels and attractions, plus a new group bookings portal due to launch in December.

The travel distribution company has increased its European hotel product by 10% over the past year and grown its London office from 15 to 25 staff, as well as opening a new branch in Rome with another set to open shortly in Barcelona.

Lauren Volcheff, vice president of marketing for Tourico Holidays, said: “We announced our expansion plans last year at World Travel Market, so it’s the fulfilment of that. We have had an excellent year.

“We have really expanded our team in the London office, both our sales team who work with tour operators, and also our hotel negotiation team. Finally our European product is at the same level as our American product.”

The Orlando-based wholesaler marked its 20th anniversary this year with 20 trade events around the world, plus two new programmes to incentivise further bookings. It introduced the ‘25+ Series’, a collection of attractions offering a discount of at least 25% on published prices and therefore providing the best profit margins, with examples ranging from Warwick Castle to the Miami Open City hop-on, hop-off bus tour, each of which offers 40% profit compared to consumer prices.

For operators making large-scale bookings, there is also the Ancillary VIP Program, which offers even further reduced prices to any client booking more than $10,000 in ancillary products – or attractions – via Tourico’s XML connection.

Volcheff said: “I think we have a lot more work to do in the UK, but we have currently about 15 who have reached that level, and we expect that to triple in the next year.

“Everything we’re doing is about offering better product and better prices. In our 20th year, we are trying to thank our clients for doing business with us, so it’s about passing profit back to them. Whether it’s the London Eye or Disney tickets or a hotel, there will be better product at a better price point.”

Tourico Holidays will also be launching a new Groups Marketplace in December, an online portal offering agents access to more competitive rates for group bookings, as well as overhauling its technology and improving agent access to the home rentals market.

Volcheff added: “We’re trying to make [home rentals] a B2B product. Right now, agents really struggle with selling the product, so we have made it the same as booking a hotel, with real-time availability and real-time pricing, so financially it’s the same.

“The average transaction for a home rental is 3.5 times higher than a hotel, so we want to change the home rental industry and ensure that it’s as seamless as booking a hotel.”