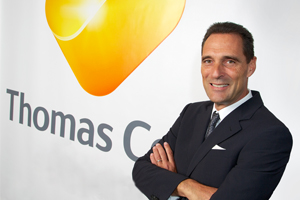 New Thomas Cook chief executive Peter Fankhauser has confirmed he intends to continue the strategy set out under Harriet Green.

He said: “I feel very honoured to be leading this business which means so much, to so many people.

“I am determined to work with all our great colleagues worldwide to build on Harriet’s achievements, continuing to deliver great holidays for consumers and good returns for investors.”

During the breakfast, he admitted he did not initially jump at the chance to move to the UK when Green asked him to join her.

But he added: “Initially I said the UK was not really a place to be. But you can’t just complain. If you get the chance to fix it, you need to do something about it.”