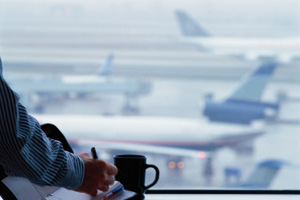 Business travel spend grew by just 0.9% last year following a three-year slowdown that bottomed out in 2013 with growth of only 0.5%, a new study reveals.

But the rise in total travel spend in the ten countries covered by the report is expected to fall back to 0.7% in 2015.

“According to our research, they now devote 51% of their business travel budgets to business development activities, as opposed to 46% in 2013.

“Yet, in a persistently difficult economic context, controlling direct costs remains a priority. The real challenge is to gain a comprehensive view of these expenditures: expectations are increasingly high in this area, particularly with the adoption of end-to-end solutions.”

Nearly half of companies plan to develop their activities abroad in the next three years, as opposed to 38% in 2013 and 35% in 2012, according to the research.

Business travel within Europe specifically grew the most in 2014, representing 50% of total growth. In 2015, it is expected to increase by six percent, to account for 56% of business travel growth in total.

Company priorities remain focused on cost control and monitoring. Cost control was the top priority for 87% of companies in 2014.

Two practices are now clearly among the top three tools for controlling costs: online booking, ranking second in 2014 (versus fifth in 2013), and advanced booking, which came in third in 2014 (fourth in 2013).

The percentage of companies using both self booking tools and expense management solutions has grown in recent years to reach 43% in 2014 against 26% the previous year.

Companies are clearly motivated by the possibility of monitoring their travel programme as a whole, not only by cutting costs, the report says.

Implementing end-to-end solutions is top among services that must be developed (29%) by travel management companies, followed by business travel ROI assessment, which is key to transforming the perception of business travel as an investment.

Mobile solutions rank third (13%), as does the integration of new types of suppliers, which, driven by traveller demand, appears for the first time in the barometer.

The Barometer found that mobile technologies are becoming a major channel, with over half of companies claiming to have incorporated mobile use into their travel programmes.

Companies say they would like to develop mobile use to include bookings, expense reporting and management, and security.

Between cost control and a comprehensive view of spending, traveller safety ranked second among company priorities, up by 24 percentage points in two years.

In the list of company priorities, the comfort of the traveller fell from fourth place in 2013 to sixth in 2014.