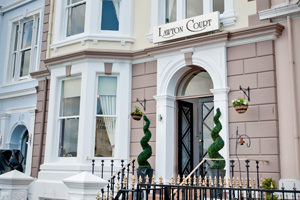 Lawton Court, where rooms start at £74 per person per night, also took second place in the World’s Top 10 Small Hotels and came fourth in the world for service as part of the online review site’s Travellers’ Choice Awards.

In nine months since it opened, the hotel has been rated five stars out of five in 233 of the 235 reviews on TripAdvisor. The other two customers gave it four, the Telegraph reported.

The Travellers’ Choice awards take into account the quality and quantity of reviews and opinions, as well as ratings specific to each award category.

The only other British hotel to claim first prize in the 2015 awards was Millgate bed and breakfast, in Masham, North Yorkshire, which was first in the World’s Top 10 B&Bs ratings.

The £500-a-night Haymarket Hotel in London was ranked as Britain’s best hotel, while the £1,144-a-night Gili Lankanfushi Maldives, on the North Male Atoll of the Maldives, took the title of the world’s top hotel for 2015.