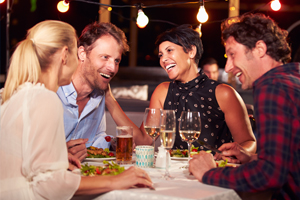 More people are flying to visit friends and relatives than ever before, new figures reveal.

The study reveals that £4.07 billion was spent in the UK by overseas residents who were visiting their friends and relatives last year.

The figures come from mew analysis by the British Air Transport Association (Bata) of official travel statistics and show that 83% of visits are made by air.

Just 10% are made by sea and 7% by rail through the Channel Tunnel. Even for journeys to and from other parts of Europe, flying accounts for 77% of visits, compared with 14% by sea and 9% by rail.

Luton airport had the highest proportion of VFR journeys at 48% in 2013, according to the latest Civil Aviation Authority passenger survey data.

Bata chief executive, Nathan Stower, said: “While recent debate has focused on the economic benefits and environmental challenges of aviation growth, the social benefits of aviation should not be ignored.

“Air travel allows people who live in different parts of the country and different corners of the world to meet up with their family and friends.

“Communication technology may have improved and expanded in use significantly in recent years, but it’s clear that nothing can replace being with your nearest and dearest.”