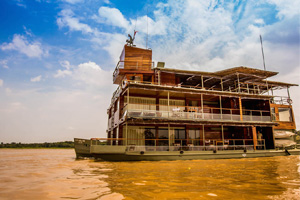 Amazon river cruise specialist Rainforest Cruises is offering agents 10% commission as it predicts a boost in bookings from UK travellers ahead of the 2016 Olympic Games in Rio de Janeiro.

A new programme of cruises has been introduced to tie in with the games which run between August 5-21.

The company saw the number of bookings from UK sports fans more than double during the 2014 World Cup in Brazil, and is expecting the Olympics to have a similar impact.

Rainforest Cruises director, Jeremy Clubb, believes the draw of the jungle should prove irresistible to visitors despite the Amazon river cruise capital of Manaus being a four-hour flight from Rio.

He said: “Rio is one of the most fascinating cities in the world and there will be a real carnival atmosphere during the Olympic Games, but Brazil is a huge country with many fascinating landscapes and an adventure along the Amazon is one of its unmissable draws.

“With a range of cruises scheduled to tie in with visits to the Olympics, we can give travellers the chance to explore the world’s most famous river and see the spectacular jungle and wildlife up close.”

Return flights from Rio to Manaus start from around £180 per person in August 2016.

Cruises of three, four, five and seven day durations are available from Manaus, with a variety of start dates during the month.

All cruises listed depart Manaus, and prices include transfers, guides and excursions, all meals.

Prices start at £729 per person for a three-day sailing based on departures on August 1 and August 29.