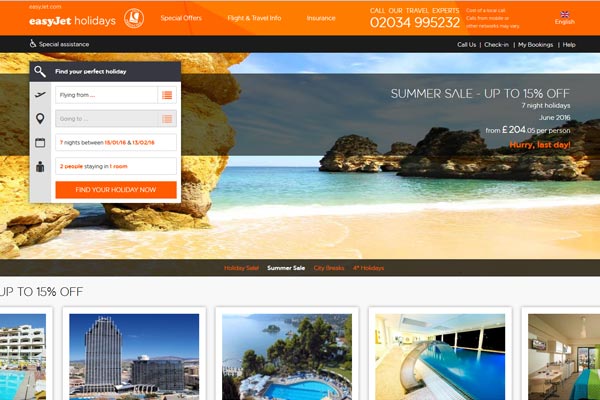 Agents have slammed “offensive” radio adverts from easyJet Holidays which “imply travel agents are a rip-off”.

The concept aims to change perceptions of easyJet Holidays’ 3 – 5-star package holidays, instead positioning the operator as challengers in the ‘posh’ holiday market.

The radio adverts, which will run for six weeks, suggest customers would need to “pawn the family silver” to afford one of the fictional Farquhar holidays, and feature phrases such as “don’t let that Farquhar take you for a ride” before highlighting high-end easyJet Holidays packages starting from £249 per person.

However, while the adverts may be intended as “light-hearted”, some agency bosses are not amused.

Niall Douglas, managing director of Full Circle Travel, said: “Quite amazing how many ‘posh’ clients will not fly easyJet regardless of the work us Farquhar-types do to help promote them. I also find the stereotyping of the luxury agency boss somewhat offensive.

“The adverts are misleading because booking a luxury product with easyJet is not the same as booking with a good independent luxury agent, and we do not charge more for providing the levels of service we do.

“Luxury clients usually want much more than a piece of paper when they book a holiday – they want a complete service including regularly staying in touch, the same person to speak to each time, pre-departure checks and calls and a welcome home call from a real person.

“Essentially I am frustrated as we have worked hard to make clients aware of the improvements easyJet has made and now they are portraying the hand that helped feed them the posher clients as a money-grabbing and overly expensive way to book their holiday.

“Having said that, I am not worried about them becoming a big player in the luxury market.”

Amanda Matthews, managing director of Designer Travel, added: “I think easyJet is trying to imply that travel agents are trying to rip people off.

“If only it were true that agents are making a phenomenal profit – it’s a very competitive market out there.

“On the easyJet Holidays site people have to work it out themselves, whereas with a travel agent you are getting competitive prices as well as someone to point you in the right direction.

“It’s not always about price – it’s about needs too. It is not a like for like comparison. Besides, easyJet Holidays is an online travel agent itself.

“I personally think these adverts will go over peoples’ heads anyway.

“Their marketing department have got their heads in the clouds if they think we are charging far more – it’s make believe. It is quite amusing.”

The radio adverts will run for six weeks, with further activity across additional channels including print planned for later this year.

An easyJet spokesman said: “EasyJet Holidays’ new radio advert is designed to be a light-hearted way of promoting the holidays it offers using a fun fictional character to show the good-value easyJet Holidays offers.”