Over the years Portsmouth-based agency Planet Cruise has become well known for its weekly TV show.

It’s been going for eight years, airing on the Ideal World shopping channel, and was one of the key attributes that led to Iglu Cruise acquiring its then rival two years ago.

According to Planet’s general manager Sharon Campbell, the show has gone from strength to strength over the years becoming the “biggest cruise TV show in the UK”, and as a result a new YouTube series has been created to run alongside it.

“The TV show is great for us because it gets key messages out to our audience quickly, with relevant deals. Our audience trusts the advice we give and we’ve built up quite a following,” Campbell says.

“The TV show is at a set time (8pm every Thursday) so we wanted to find a way to target existing and new customers that might need more flexibility on when they watch our show – that’s how Planet Cruise Weekly came about.”Destination and ship content

The new YouTube show is produced and filmed separately from the TV programme – the former is shot in a studio at the cruise specialists offices in Portsmouth, while the latter is filmed at Ideal World’s base in Peterborough.

Hosted by cruise experts Keith Maynard and Glenn Wallis, Planet Cruise Weekly is due to air its 17th show this week.

It started out focusing primarily on deals, but feedback from viewers has led to the introduction of more destination and ship-focused content.

“This is all about engagement for us,” says Sharon. “So when viewers told us they wanted more content we evolved the show and dedicated more time to sharing experiences of new products, ships and destinations.”

The shows are planned in advance and the schedule includes “important dates in the cruise calendar”, such as ship launches and refurbishments.

Last week’s show was all about Thomson Cruises’ ship Tui Discovery and this week’s is around the refit of Cunard’s Queen Mary 2. When Travel Weekly spent the day filming with Planet, the show was all about Disney Cruise Line, following the brand’s recent revelation that it was investing in new ships. Developing talent

While former cruise ship worker Keith Maynard is a professional TV presenter, his co-host Glenn Wallis has been a cruise consultant for Planet Cruise for the past two years.

“Like Keith, Glenn also has a background of working on ships,” Sharon says. “They’re both extremely knowledgeable and they work well together in front of the camera.

“We like to train and grow talent within the Planet Cruise business and we saw an opportunity for Glenn to be a host on the show. He also hosts the TV show slot too and that works really well.”Lights, cameras, action

Each week the team research deals, destinations and ships in advance of filming Planet Cruise Weekly.

Every Wednesday Sharon and the crew get together to discuss the order of the show and fine tune the plan of action for filming each segment.

Cameraman and video editor Gavin Mann has the task of pulling the show together before its cut and edited.

It’s then uploaded every Thursday at 5pm onto Planet Cruise’s YouTube channel.

“It may get loaded on to the site every week like clockwork but the fact it is online means you can tune in at any time and watch it,” Sharon says.

“There’s also the luxury of being able to watch previous shows if it was on a topic of particular interest.”

While viewing figures from the Ideal World show aren’t readily available, Planet’s YouTube show has so far attracted an audience of anything between 2,500 and 8,000 viewers.

“It’s extremely popular and we’re really pleased with how well it has been received,” Sharon says.

“We definitely see a notable spike in people visiting the website once the show has been uploaded online.” 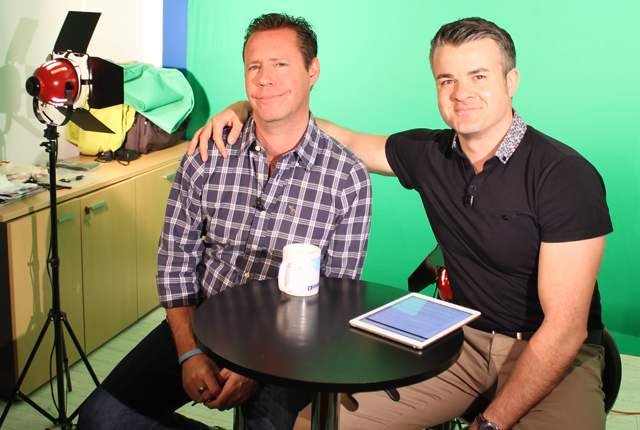 I’m a self-employed presenter and I live in Kent. I stay in Portsmouth ahead of the show each week.

A day at Planet involves having a production meeting in the morning where we decide on the exact areas of focus. Prior to that meeting I’ll have done some research on the ports of call or the ships that we’re featuring that particular week. The filming usually takes about an hour to an hour and a half.

I worked on cruise ships for 12 years after getting a job on board Sun Cruises’ Sun Dream in 2000. I went from Sun Cruises to Thomson Cruises, most of the time as cruise director, then I went to Cunard and my last ship was Queen Mary 2.

I really enjoy meeting people. Last year we introduced the first ‘Cruise with Keith’ where I do tours with Planet Cruise’s guests and host a meal. It was on Celebrity Cruises and this year’s will be on MSC Cruises.

The most challenging part of the job is trying to effectively and actively diffierentiate cruise lines for viewers because everything moves and develops so quickly in this industry.

The most common question viewers ask me is if I’ve lost weight recently because they think I’m a lot slimmer in real life than on TV!

The essential selfie shot with @beefikeefi@planetcruise#TWontheroadpic.twitter.com/6JfosDVjB4

The similarities between their meeting and our internal news meetings surprised me.

Having researched the latest news on Disney Cruise Line – the focus of that week’s show – the team discussed what was most important to communicate to viewers.

Like our meetings, they thrashed out various angles for that week’s shows to highlight what existing and potential Disney Cruise fans want to hear. I had always been intrigued about what goes on behind the scenes of a TV show, and watching the action unfold in Planet’s own studio was genuinely interesting.

It showed me a different angle to the various roles travel agents perform. And being able to offer advice and expert knowledge in this way is another string to Planet Cruise’s bow.

A day with: Gold Medal hosts 80 agents at its brand new Leyland headquarters