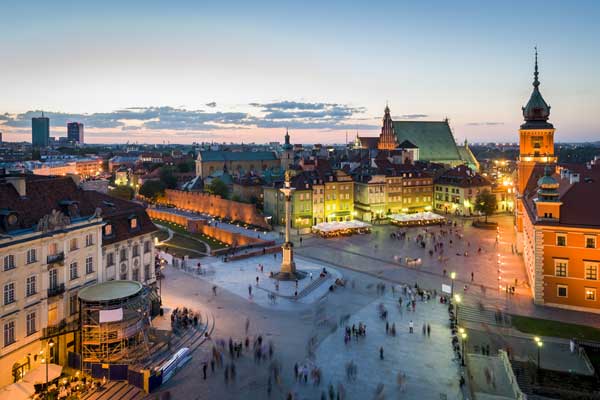 Warsaw has emerged as the best value city break destination out of 17 surveyed for travellers looking for local culture.

The Polish capital is among seven cities – including London and New York – where cultural highlights cost less than last year, despite the weaker pound, new research found.

Warsaw’s price tag of £64.52 – based on visits to the city’s top museum, art gallery and heritage site plus nights at the Polish National Opera, National Ballet and a symphony concert – costs 40% less than in 2015 even though sterling buys nearly 16% fewer Polish zloty than a year ago.

Prices are at their lowest since 2008 when the Post Office Travel Money cost of culture survey was first conducted. At that time the same six cultural attractions cost 17% more at £75.28.

Two people could enjoy all six cultural highlights in Warsaw for less than the cost of one opera ticket (£155.91) to see Otello performed by the Madrid Opera at the Teatro Real.

Like Warsaw, prices in Budapest are at their lowest since the Post Office survey started in 2008 but the fall is 29% less than £106.95. This year’s bargain prices have been boosted by the low cost of a ticket (£8.54) to see the Hungarian National Ballet perform Kyling It being less than a quarter of the cost for a ballet performance in 2015.

Dublin at £119.77 is the eurozone’s best value city for a cultural break, although prices for ballet, opera and music performances are significantly higher than those available last year. This has made the six cultural attractions 55% more expensive than 2015, according to the study.

New York was again the most expensive city of those surveyed, yet good seats to see La Bohème at the Metropolitan Opera, The Firebird performed by the New York City Ballet and a concert of Beethoven by the New York Philharmonic Orchestra each cost less than those available 12 months ago. As a result, New York’s total has dropped to £303.94 – £187 or 38 per cent less than a year ago.

That dubious honour goes to Barcelona, where the high cost of ticket to the opera (£120.72 for Macbeth) and ballet (£93.28 for Coppélia) has contributed to a 20% rise in the £276.71 price tag for the cultural highlights.

The survey identified the three cheapest and most expensive options for each cultural attraction. It found that visits to see several world-famous heritage sites cost nothing – Berlin’s Brandenburg Gate; the Grand Place, Brussels; The Little Mermaid, Copenhagen; Prague Castle and Warsaw’s Royal Castle.

But while London’s National Gallery and the British Museum are free to enter, the Tower of London was the most expensive heritage site by far at £25.

New York’s American Museum of Natural History (£17.19) and Metropolitan Museum of Art (£19.53) were the highest-priced museum and gallery overall, while Amsterdam’s Van Gogh Museum (£14.81) and Rijksmuseum (£15.24) charged the highest entry prices in Europe.

Berlin was most expensive for a classical music concert (Deutsches Symphony Orchestra, Mahler– £47.91), while Madrid had the highest-priced opera ticket at £155.91 (Otello, Teatro Real) and the New York City Ballet dancing The Firebird was the most expensive ballet at £108.68.

Andrew Brown, of Post Office Travel Money, said: “It is encouraging to see that prices have actually fallen in several of the cultural capitals surveyed this year.

“This means arts lovers can get to see a world-renowned orchestra or a top opera or dance company at very reasonable prices, despite the falling value of sterling.

“Bear in mind, though, that prices can vary dramatically from one city to another so do some homework before booking a culture break.

“It’s also worth pointing out that what you will pay depends very much on your taste in culture. For example, those people who want to visit European museums and galleries will find that entry is free to many of the most famous ones.”