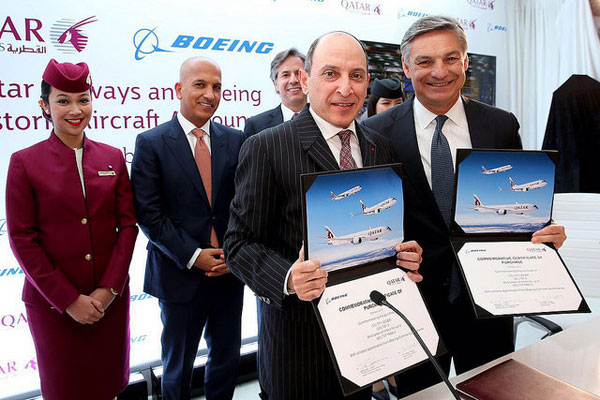 Qatar Airways has ordered 40 Boeing twin-aisle aircraft and intends to add 60 more to its fleet in deals worth nearly US $20 billion combined.

With the new order, Qatar Airways has increased its backlog of Boeing “widebody” aircraft from 65 to 105, including 60 777Xs.

Qatar Airways group chief executive Akbar Al Baker said: “Boeing has proven to be a valuable partner, and today’s announcement is testament to our appreciation of the quality of their product and their dedication to providing world class customer service.”

The announcement was attended by the state of Qatar’s minister of finance Ali Shareef Al Emadi, US deputy secretary of state Tony Blinken and the ambassador of Qatar, Mohammed Jaham Al-Kuwari.

Boeing commercial airplanes president Ray Conner said: “Our partnership with Qatar Airways has grown and strengthened tremendously over the years and I look forward to the time when its fleet will feature an increasing number of both our single and twin-aisle airplanes.”

US secretary of commerce Penny Pritzker added: “Beyond its importance for these two companies, this agreement demonstrates the importance of global commercial partnerships in strengthening our bilateral ties. This deal will strengthen economic opportunity and job creation, and highlights the importance of strong global trading relationships.”