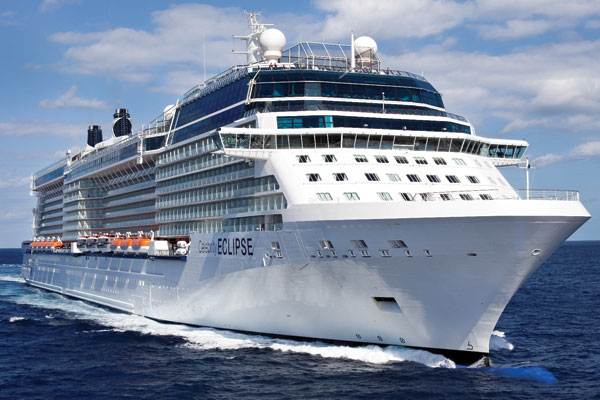 Celebrity Cruises has revealed Celebrity Eclipse will become the first ship from a major line to homeport in Dublin in 2018 after spending the last eight years sailing out of Southampton.

Solstice-class sister vessel Celebrity Silhouette will replace Eclipse in Southampton, offering northern Europe and Mediterranean itineraries from 2018. The deployment is the most significant ever made in the UK and Ireland by Celebrity Cruises.

Silhouette will sail seven and eight-night Norwegian Fjord sailings, 12 to 14 night Scandinavia and Russia itineraries and 13 to 14 night Mediterranean, Canaries and Azores itineraries.

Jo Rzymowska, vice president and managing director for the UK, Ireland and Asia, said: “The performance of the Celebrity Cruise UK and Ireland business has gone from strength to strength in recent years and we are pleased to be able to grow our offering in the region with both Celebrity Silhouette and Celebrity Eclipse homeporting from here during the 2018 season.

“After speaking with our trade partners we saw this as a great opportunity for us to expand and this is the biggest ever change made to UK and Ireland deployment.”

Rzymowska said Celebrity Eclipse is well known by customers and trade so would build a solid foundation as the line’s first ship sailing out of Dublin.

“Eclipse is a much-loved ship, so by moving her to Dublin we believe some guests will follow, as well as attracting new passengers too.

“Dublin is very popular with our north American guests who have great affinity with the country plus with its upgrades Silhouette can offer an enhanced experienced with sailings out of Southampton.”

Russia sailings on Celebrity Silhouette from Southampton in July 2018 include the chance to attend the 2018 Fifa World Cup in Moscow including the third position match in Saint Petersburg.

During its farewell season in 2017, Celebrity Eclipse will host a special ‘Modern Luxury’ two-night sailing to Le Havre as well as a President’s Cruise attended by the line’s president and chief executive Lisa Lutoff Perlo.

The Solstice-class ships will be joined by two other Celebrity vessels in Europe in 2018.