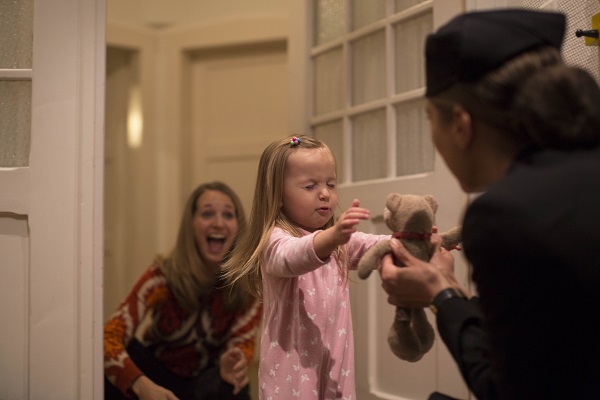 Christmas came early for little Norah, daughter of a family that earlier this month relocated from New Zealand to Germany, who was overwhelmingly surprised when her lost teddy bear appeared at the door of her new home.

Norah had been playing with her beloved teddy, called Bear, in the children’s play area at Air New Zealand’s Auckland international lounge before the family took flight to start a new life in Germany.

But Bear was left behind.

Norah became very upset during the flight to her new home, which caught the attention of the cabin crew who took it upon themselves to relocate the teddy.

Travelling over 11,000 miles from New Zealand to Germany, carried by Air New Zealand cabin crew team manager Elena Busche, Bear made the journey across the world to be reunited with Norah.

He travelled on the back of Elena’s suitcase, gazed at the top of the clouds, met Santa Claus and stayed in hotels.

When he arrived at the family’s new home, Norah’s face was lit up as she was reunited with her favourite teddy.