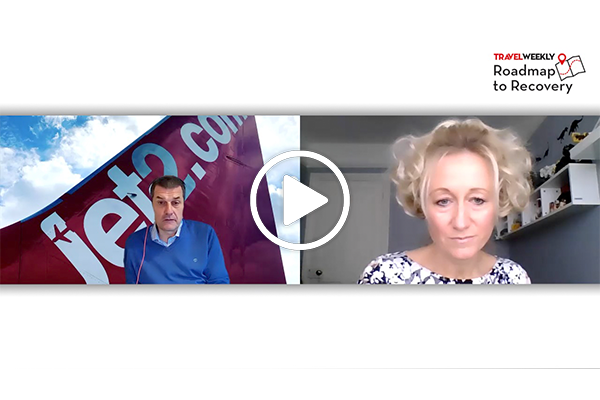 The chief executive of the UK’s second largest tour operator fears the government’s Global Travel Taskforce will prioritise the return of “glory routes” rather than destinations “ordinary people” want to visit this summer.

Jet2holdiays boss Steve Heapy said he doesn’t expect many destinations to be on the to-be-published green list from May 17, and predicted the government would go try to open up what he dubbed “glory routes”, such as departures from Heathrow to places like Singapore and Israel, at the expense of typical summer holiday destinations from smaller airports.

He told a Travel Weekly webcast: “What we want is routes that ordinary people want, not the business routes,” adding that most people in his town would prefer to visit Spain and Turkey.

“We have to be careful that [government] doesn’t say ‘look, we kept our promise, we got some flights on’, and it’s the business routes. That’s no good.”

He said he had hoped for more clarity on whether holiday destinations would be added to the green list in the taskforce report, published overnight, and that it is impossible to plan without knowing why countries are on or off. Jet2 has postponed its restart date to June 24, from May 17, because of the lack of clarity.

“In the absence of having concrete criteria that’s used to assess whether something’s red, amber or green, it’s very difficult to predict. We can guess, but of course we just don’t know. There’s just no certainty. We don’t know when we can start flying, where we can start flying to, what the conditions are for flying – and therefore it’s impossible to plan going forward.”

“People in the government need to stop touring the country, visiting vaccine centres and sticking their thumb in the air as if everything’s alright, and get behind the desk and run the country.”

Transport secretary Grant Shapps said this morning that he was “committed” to driving down the price of Covid PCR tests.

But Heapy said: “Being committed to something is quite a loose thing. The British government is committed to massively reducing CO2 emissions by 2050, I’ll be long dead by then. They committed to bringing down the national debt, that’s not happened.

“You can be committed to lots of things. We don’t want commitments, we want action.

“It’s quite disappointing because we’ve got to now work out what we are going to do with each of the destinations and our hotel partners.”

Despite his frustration, Heapy said it was “not futile at all” to continue speaking to the government to make the case for more holiday destinations to open.

He added: “We are just going to have to keep plugging away. There’s no point spitting your dummy out and starting massive arguments. Maybe people think I’m doing that today, I’m not I’m just saying that because of the lack of clarity we’re having to put the [restart] date back [to June 24] and that’s it.

“Am I happy? No. Am I disappointed? Yes. Am I angry? Well I’m not in the best of moods, and I do have some empathy for the government, but they can’t keep kicking the can down the road.”

He added: “Our people want to go on a holiday themselves, but they also want to take people on holiday. They’ve got jobs, livelihoods, mortgages.