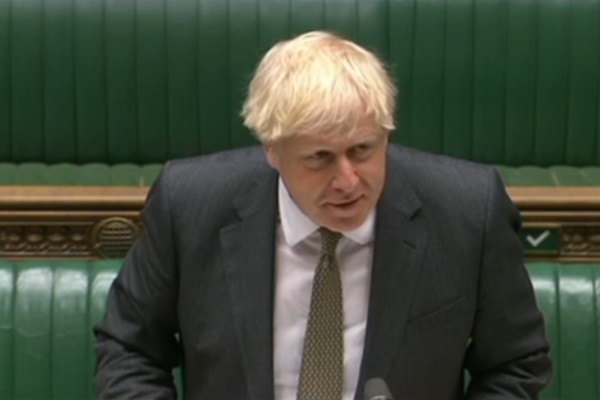 Prime Minister Boris Johnson has defended the government’s decision to impose a partial ban on international flights against calls for a blanket shutdown.

In a series of exchanges with opposition leader Keir Starmer, Johnson insisted: “We have one of the toughest regimes in the world.”

However, Starmer told him: “The government’s own scientists in the Scientific Advisory Group for Emergencies [SAGE] said two weeks ago that ‘Only a complete pre-emptive closure of borders or the mandatory quarantine of all visitors upon arrival can get close to fully preventing new cases or new variants’.”

He asked: “Why did the Prime Minister choose not to do the one thing SAGE said could prevent new variants coming to the UK?”

Johnson insisted: “SAGE did not recommend a complete ban and says a travel ban should not be relied upon to stop the importation of new variants.”

Johnson added: “It is illegal to go on holiday. It is illegal to travel from all the countries on the current ‘red list’, and we will be going forward with a plan to ensure people coming into this country from ‘red list’ countries have to go into government-mandated quarantine hospitality.”

Johnson told him: “It’s not practical to close off this country completely.

“What is practical is to have one of the toughest regimes in the world and to get on with vaccinating people, which is what we’re doing.”

Starmer persisted, suggesting that “21,000 people are coming into this country every day. The new border arrangements are weeks away and will only affect direct flights from some countries.

“We know from the first wave of the pandemic that only 0.1% of virus cases came from China where we had restrictions, whereas 62% came from France and Spain, where there were no restrictions.

“Why does the Prime Minister think the variants will arrive in the UK only by direct flights?”

Johnson said: “I repeat what someone has to do if they want to come into this country. Seventy-two hours before they fly, they have to get a test. They have to have a passenger locator form. They are kicked off the plane if they don’t have it. They then have to spend 10 days in quarantine.

“If they come from one of the red list countries, they have to go straight into quarantine.”

But Starmer told him: “If the current arrangements were working, the variant would not be in the country.”

• Speaking during the evening briefing from Number 10, Johnson said more details about mandatory hotel quarantine for those returning from high-risk destinations will be announced by health secretary Matt Hancock on Thursday (February 4).

He reiterated that the UK has some of the “toughest” border regimes in the world, without affecting the economy that depends on imports of food, medicines and other goods.

“We cannot cut ourselves off completely,” he said.

“It is a tough regime already within the limits of an economy that depends on trade and access to the rest of the world.”

He reiterated the need for a negative test within 72 hours of arrival in the UK, and the requirements to fill in a passenger locator form.