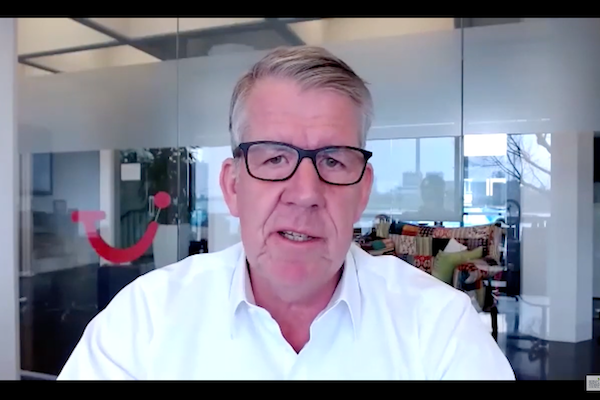 The boss of Tui Group has said Covid quarantine measures are “toxic” for the travel industry and called for vaccination programmes to ramp up to help boost tourism.

Speaking at the World Travel & Tourism Council global summit in Mexico, Fritz Joussen said quarantine for arrivals is a “big issue” as it is “turning off” holidaymakers.

“Quarantine is something that is toxic to the travel industry,” he said.

However, testing and vaccinations are important factors in boosting consumer confidence, explained the chief executive of Europe’s largest travel company.

Tui to raise at least €350m through bond offering

“Safe travel is possible with all the health protocols,” he said. “Customer feedback was positive. Testing is not a big problem.”

His comments came during a panel discussion about the impact of the pandemic on European travel and tourism.

The debate heard that international visitor spending in Europe fell by more than 60% in 2020, and travel and tourism’s contribution to GDP fell by almost 50% across the continent.

Joussen hailed the financial support from governments, such as furlough schemes, but said the focus should now be on increasing levels of vaccination.

He pointed to the example of a “huge pick-up in bookings” for American tourists wanting to travel to the Caribbean.

“That is the confidence that has made an enormous difference.

“The level of vaccination in the US seems to be the catalyst that actually gives confidence to people.”

He said Greece’s decision to allow vaccinated travellers is a “smart move” as holidaymakers will go where they are able to visit.

“People are opportunistic. If it’s possible to go, they will go,” he said.

However, he called for more consistency in travel rules, saying British holidaymakers look set to be allowed to holiday in Greece but, coming back home, they may have to go into quarantine if the destination is designated as amber under the new traffic light system.

He described the UK as a “world champion”, along with Israel, for the country’s progress in vaccinating its citizens.

Joussen said there is “enormous” pent-up demand and households have increased their savings after a year of not travelling.

The WTTC says its global summit in Cancun is the first face-to-face event in the travel and tourism industry since the pandemic hit, and the first major live event in the sector this year.

About 600 delegates are attending in person, while thousands more have been watching the hybrid event online.

Tui to raise at least €350m through bond offering