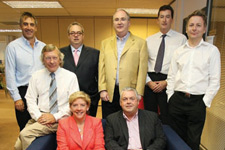 Travel Weekly jointly hosted a round table on the future of European Cruising with Norwegian Cruise Lines.

We asked a panel of cruise industry experts how the industry will react to the huge amount of capacity about to arrive with the launch of new ships.

European deployment in 2007/08 is increasing, but can it be sustained and supported by cruiselines and agents?

With the expansion of European cruising, the Mediterranean could soon be a year-round destination to rival the Caribbean.

Panellists agreed that the boom in ex-UK and European voyages may mean the traditional summer cruise season would expand.

Norwegian Cruise Line vice-president international business development Francis Riley said: “We are all coming in early and staying later. Perhaps the Mediterranean will become year-round like the Caribbean.

“The Mediterranean cruise season was eight months, now it is every month.”

“Customers see it as a massive opportunity thanks to stretching the season and lowering prices.”

With cruise ships and seasons expanding, the ports need to keep up with the extra demand. Port of Southampton captain Steve Young said: “The season was eight months, now it is every month. The weekends used to dominate but now it is every day of the week.

“In the 1990s, Queen Elizabeth Two and Canberra made 50 calls a year, next year there will be 276 calls. Passenger figures have doubled in five years and quadrupled in 10. We have long-term deals with companies that show the commitment.

“Next year we will have built our fourth terminal ready for 2009, which gives cruiselines confidence to use us,” Young said.

Fred Olsen Cruise Line marketing director Nigel Lingard said: “There is room for us to take ships to the market. We are considering southwest England, south Wales and the east coast.”

Lingard said even though his company is bringing in a new ship, Balmoral, it will be a tough year because of the volume of tonnage.

“Our calculation will be 40% extra capacity on sale next year and the UK market is about 1.3 million people,” he said.

“The arrival of tonnage is more of a challenge to agents than a problem for us.”

Royal Caribbean managing director Jo Rzymowska sees the capacity increase as a massive opportunity. “It’s far more optimistic than that. From a UK point of view, four million people have been on a cruise and 15 million people want to cruise.

“Capacity has increased enormously, but there is no way it is saturated. It’s up to the industry to find the right price for the right cruise.”

Riley said new customers need to be brought in to the industry.

Director of luxury operator Seadream Ian Buckeridge said: “Our sector is different. The arrival of more ships can only be a good thing for the trade. Opportunities exist because of differentiation. The arrival of tonnage is more of a challenge to agents than a problem for us.

“We want them to think about selling our cruises rather than thinking customers want a classic cruise.”

Buckeridge said: “We have a job to educate our travel trade partners and the public that there is more than just the Mediterranean. We shouldn’t just target agents who sell cruise – but areas such as Greece and North Africa. The challenge is to find new agents who want to sell cruise.”

“The challenge for the Association of Cruise Experts and us as cruiselines is to not bombard them with everything. We should focus on people who are great at selling Greece, for example – cruiselines go there.”

Shorter cruises are a way to attract new cruise passengers, according to agents and operators

Over the past couple of years an increasing number of cruiselines have added more two, three, four and seven-night breaks to give clients a taster.

Victoria Travel chairman Andrew Gardner said: “Demand is increasing. The exciting part is seven-day options to promote to first-time cruise passengers. We are seeing big growth in the short-break market.

“You have to get early bookings and that means throwing money at it. If we want new passengers, we need new marketing and it has to be done in a big way,” Gardner said.

Buckeridge was more sceptical of the short breaks. He said: “The two and three nights bring a separate breed of people who want an extra holiday or to have a look. I’m not sure these are good things for the industry.”

Riley said: “We have three mini cruises next summer and some people have booked to go on all of them. We also get a lot of people who want to try out new ships before they decide on a longer cruise in the Mediterranean or Caribbean.”

Rzymowska agreed: “When the ship is new it can bring in new people who will hopefully become repeat customers.”