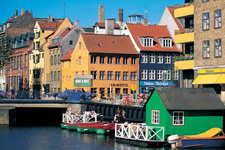 Denmark is the smallest Scandinavian country and is made up of the Jutland peninsula and 400 surrounding islands.

Copenhagen buzzes with life, but beyond it lies a picturesque land of rolling hills dotted with moated castles, Viking ruins and villages with half-timbered houses.

Many UK visitors spend most of their time in the capital – but with nearly 3,000 miles of coastline, Denmark is a great place for a beach-based holiday and in the summer months it’s a wonderful country to explore by bike.

Of the islands, Funen, Sealand, Lolland, Falster and Bornholm are among the best-known, but there are dozens more for real back-to-nature experiences.

The country is more accessible than ever from the UK. In 2007 BMI launched Glasgow to Copenhagen flights and SAS added more flights from London City. Sterling Airlines will start new services from East Midlands in October.

With some fantastic new hotels opening, too, now’s a great time to sell Denmark. Here are some of the highlights.

Copenhagen’s cobbled medieval streets and picturesque gardens are easy to explore on foot – but visitors could also join the locals and jump on a bike.

Head to the Nyhaven district for its canal lined with colourful houses and cafes, and the Little Mermaid sculpture, the symbol of the city.

Tivoli Gardens is one of many green spaces (the concert hall there has just been refurbished) and there’s plenty for culture seekers, including the National Gallery and the moated Rosenborg Castle.

It’s the best city in Scandinavia for nightlife too, with quirky cafes, great clubs and plenty of live music.

Most visitors to Helsingor on the Oresund coast come to see the Kronborg Slot (Danish-language website), a World Heritage Site made famous as Elsinore Castle in Shakespeare’s Hamlet.

The castle dates from the 1420s, and during the summer the tragedy is often performed in the courtyard.

Other attractions include the Danmarks Tekniske Museum, dedicated to technological inventions from the early 20th century, a Gothic cathedral and a medieval monastery just out of town.

The original capital of Denmark, Roskilde on North Zealand is set on a picturesque fjord just 19 miles from Copenhagen.

The Viking Ship Museum displays vessels excavated from the fjord, such as an 18-metre warship, and next door on Museum Island craftsmen make replica ships. The other sight you can’t miss is the striking 12th-century cathedral, a World Heritage Site.

The Roskilde Festival, the biggest rock festival in northern Europe, is held here each summer too.

Set on Funen island, the birthplace of Hans Christian Andersen has a fairytale feel, with pedestrianised streets and historic buildings.

You can visit the writer’s childhood home, while The Tinder Box cultural centre brings his stories to life.

Denmark’s second-largest city is well-served by low-cost carriers and combines lively nightlife with pretty countryside and a sandy beach. It’s a university town with hundreds of bars, clubs and restaurants.

The vast ARoS Museum (over nine floors) gives a fascinating insight into the country. It’s also a good base for exploring the ‘Lake District’ of Denmark, a region of hills, forests, and – you guessed it – lakes.

The name speaks for itself – Legoland amusement park is dedicated to all things Lego. It’s Denmark’s favourite family attraction and a holiday destination in its own right.

There are some incredible Lego models of cities, as well as adrenaline-pumping rides and more chilled-out activities such as canoeing or train rides.