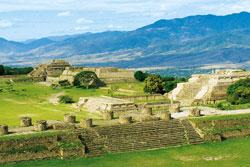 Most tours feature must-see sights such as Chichen Itza, near Cancun, the Aztec Pyramids of Teotihuacan, just outside Mexico City, and Palenque in Chiapas.

But others are branching out to make the most of the country’s fabulous food or lively festival scene with tailor-made holidays for increasingly discerning travellers.

Here’s our guide to five of the best cultural tours in Mexico.

For a glimpse into Mayan culture, spend a week exploring the Yucatan Peninsula.

One of the most popular sights in this region, and indeed in the whole of Mexico, is the ruined Mayan city of Chichen Itza, recently hailed one of the New Seven Wonders of the World. Most visitors do a day trip from Cancun, 100 miles away.

The 30 crumbling buildings are set among lush jungle and at their centre is the pyramid of Kukulcan, otherwise known as El Castillo. This famous landmark has four sets of stairs, each with 365 steps, representing the number of days
in the solar calendar.

There’s a dazzling sound and light show every night, but for a truly dramatic natural show, visit during the spring equinox. The effect of the sunlight on El Castillo makes it appear that the serpent god, which guards the foot of the steps, is coming to life.

The picture-postcard walled city of Campeche is also worth a visit. Get around by tram to fully appreciate its quaint beauty.

Sample package: Cox and Kings’ 12-night Highlights of Mexico tour departs on March 10, corresponding with the Spring Equinox at Chichen Itza. The tour costs £2,650 per person, including flights, bed-and-breakfast accommodation, transfers and all excursions.

Fancy feasting on a grasshopper? Or munching on chicken in a chocolate chilli sauce?

Food is one of the highlights of a visit to Mexico. Tacos and burritos are particularly tasty when eaten in their country of origin. The region of Oaxaca is renowned for its exotic ingredients coupled and great recipes.

Daring foodies should tuck into the local delicacy, chapulines (toasted grasshoppers) flavoured with garlic, salt and lemon. Don’t leave Oaxaca without quaffing some Mezcal, made from a cactus. Tequila is unavoidable and the beer is great too.

Journey Latin America has a culinary tour which includes a stay at a 100-year-old hacienda. Guests can shop at the local market with the hotel’s chef and then cooking classes are held on the hotel’s garden terrace.

Sample package: Journey Latin America offers an eight-day Cultural and Culinary Highlights of Mexico tour for £1,907 per person in August 2008, including flights and transfers.

One of the most important fiestas in the Mexican calendar is the Day of the Dead, which takes place from October 31 until November 2, and Oaxaca’s one of the best places to see it.

Mexicans believe the dead return to visit their family and friends for 24 hours every year at 3pm on November 1. They create beautiful altars with offerings such as food, drinks and cigarettes and make miniature skeletons, dance or playing football, to show the continuity of life.

Locals decorate graves with candles, photos and drinks and many hold late-night vigils at gravesides, talking to the deceased. It’s a beautiful event with the streets full of flowers, food and decorations.

Bales Worldwide sales and tailor-made consultant Dave Orrock said: “It’s not morbid and it’s nothing like Halloween: it’s a happy, colourful and vibrant festival. The fiesta is about celebrating the ancestry of the family.”

Sample package: Bales Worldwide offers a 14-day Treasures of Mexico tour including Day of the Dead Festival for £2,740, with flights and transfers.

From Latin-style hip hop to traditional folk tunes, music is the lifeblood of Mexico.

Every October, thousands of fun-seekers flock to the old colonial town of Guanajuato for the three-week festival Cervantino which celebrates music and theatre and is one of the most important cultural events in Latin America.

During this time, the colourful streets come alive with opera, theatre, dance, drama, art and literature. If you’re looking for music at other times of the year, go to Veracruz, which is flush with marimba bands.

Merida is also worth a visit – and not just for its archaeological wonders. On a Saturday night, the town is transformed into an open-air concert as the restaurants put tables on to the streets, which are full of musicians.

Deep in the heart of an exotic lush jungle are the pyramids, towers and temples that make up the Mayan site of Palenque in southern Mexico. It’s probably the most atmospheric of Mexico’s ancient sites, with toucans flying around and monkeys swinging from the trees overhead.

It is believed the site was occupied as early as 300BC, although the buildings date back to the seventh and 10th centuries. It wasn’t rediscovered until 1773 and was named by the Spanish as its original Mayan name is unknown.

Palenque is considered one of the most important cities of its period, teeming with dramatic architecture rock carvings and sculptures.

Explore runs a tour that takes in this region. Latin America product manager Jason Beevis said: “When you visit Palenque, you get a real feeling of discovery because of its jungle setting. We also take boats through the jungle to see the little-visited ruins of Yaxchilan and Bonampak.”

Sample package: Explore offers a 16-day Indian Mexico tour for £1,691 per person in November, including a visit to the ruins of Palenque, flights, transportation, 14 nights’ accommodation and the services of a tour leader.