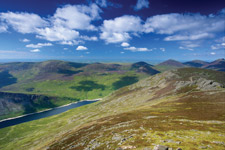 There’s excitement in the air in Northern Ireland. Political change has resulted in a new era of peace, and the place is buzzing as a result.

Everywhere you look, there are signs of renewal. New bars, shops and hotels jostle for position in a market epitomised by a warm reception and the charm of the craic.

Nowhere has this change been felt more than in the tourism sector. In 1996, the number of visitors to Northern Ireland reached 1.4 million. Since then, it has risen to almost two million – an increase of 43%.

Last year alone saw a 19% hike in visitors from Europe. With all this interest, it’s no surprise that Lonely Planet recently named Northern Ireland as one of the must-see destinations for 2007 in its annual Blue List.

However, there’s a long way to go. Tourism’s contribution to the economy – gross value added – is just 1.9% of Northern Ireland’s total. That’s the lowest in the UK and considerably less than the Republic of Ireland’s 3.4% tally. But Northern Ireland has plenty to shout about.

The country is rich in history and brimming with jaw-dropping scenery – the outlook across the Mountains of Mourne in County Down made the final of the ITV show Britain’s Favourite View. But many predict another sector will provide an even greater impetus for growth.

The biggest event in amateur golf was held this year in Newcastle, County Down and provided an ideal showcase for Northern Ireland’s golfing credentials.

“Statistics have shown that every £1 spent by a golfer is worth £15 to the local economy,” he concluded. “And because golfers care less about the weather than other travellers, there is limitless potential to increase this market.”

The Crom Estate in County Fermanagh is Set amid a wooded archipelago in Upper Lough Erne. Its new West Wing adds a special dimension to an already wonderful venue. Available all year round on a weekly or long-weekend basis for groups of up to 12 people, the West Wing is particularly suited to hosting weddings.

Situated in the fashionable Queen’s area of south Belfast, Malone Lodge is within walking distance of a wide selection of restaurants and shops. With 50 guest rooms and 23 five-star apartments, the hotel offers a variety of options for visitors. Work off the acclaimed cooked breakfast at the Lodge’s fully equipped fitness suite and sauna.

The Old Inn in Crawfordsburn, County Down is as renowned for its history it is for its service. Whether dining in the 1614 restaurant or relaxing by an open fire in the Gallery Lounge, it’s hard to escape the hotel’s old-world charm.

Northern Ireland’s beaches are some of the most spectacular stretches of coastline in Europe. Portrush Whiterocks Beach stretches from Curran Strand to Dunluce Castle and is banked by unique limestone cliffs of white rock.

Northern Ireland is also renowned for its castles, with the coastal fortress of Carrickfergus Castle being among the finest.

Similarly, the impressive Enniskillen Castle overlooks Lough Erne. Its history can be traced from its beginnings as a Maguire Castle to its use as a barracks in the 1700s and 1800s.

Music is never far away. Pat’s Bar is an atmospheric pub in Belfast’s dockland area which reverberates to the rhythm of Irish folk music. If you like your sounds even livelier, then check out Vibe at Belfast’s The Sugar Room nightclub, which is described as the city’s sexiest R&B club night.

If you fancy a bit of culture, visit the Millennium Forum in Londonderry where drama, dance, comedy, musicals and children’s shows feature in the theatre’s programme.

Shearings Holidays offers eight days’ half-board accommodation at the three-star Lynch Green Isle Hotel in Dublin, the four-star Armagh City Hotel in Armagh,
the three-star Mount Errigal Hotel in Letterkenny and the four-star City North Hotel in Gormanston. This touring holiday including return flights costs from £579 departing in May.

Superbreak offers overnight bed-and-breakfast accommodation at the five-star Slieve Donard Resort and Spa in Newcastle, County Down from £87 per person any day of the week until the end of April 2008.