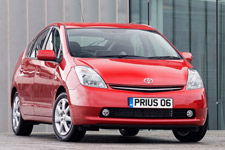 Jo Gardner tests a Toyota Prius on a return journey from London to Manchester.

I’m not used to driving and I am definitely not familiar with getting up early on a Saturday. But there I was, sitting in a brand new eco-friendly Toyota Prius about to embark on a long drive to Manchester.

The car’s satnav system, six-disc CD changer and large comfortable seats immediately relieved the pain of the early morning and the prospect of motorway hold-ups on the way to Manchester.

Creature comforts aside, the real beauty of the Prius is its electric/petrol hybrid engine. When the car is operating at high speeds, the petrol engine takes the strain, while the electric battery switches off. While you are crawling around town at 20mph, the battery starts working, helping to save fuel.

I failed to spot another Prius during the six-hour journey up north but am reliably informed that Toyota can’t make them fast enough in the US.

The journey back to London was a little less enjoyable because of roadworks on the M1, but it gave me time to play with the car’s gadgets as I looked over smugly at other drivers.