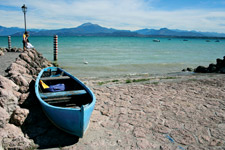 Italy has an exhaustive list of draws for the sophisticated traveller, including fine cuisine, great wine, lashings of culture and jaw-dropping scenery.

Italian food has inspired chefs all over the world, including the UK’s Rick Stein and Jamie Oliver. Milan is renowned as the world’s fashion hub, its streets lined with designer names such as Armani and Versace. And as for romance, look no further than Rome or Venice.

Here’s a region-by-region guide to what the country has to offer.

At the heart of the rolling hills and mountains of this central region is Rome, Italy’s famous capital.

Rich in art and with 2,000 years of history, the city is packed with top attractions such as the Colosseum, the Roman Forum, the Vatican and the Sistine Chapel.

Veneto and the Italian Lakes

Venture over to this region of Italy and you will find romance, atmosphere and charm, Venetian style.

In spite of its reputation for being ridiculously expensive, nothing beats the beauty of Venice, awash with canals, bridges and palaces.

Northwest of the city is the Italian Lake District. The largest – and most visited – of the lakes are Garda, Maggiore and Como.

Renowned for its beauty, Tuscany has inspired artists and photographers for centuries. The best way to see the region is to rent a villa and hire a car.

There’s no shortage of fascinating towns to explore: Pisa, San Gimignano, Florence, Siena and Pienza are all here and they’re all designated World Heritage Sites.

The island also has a dark and fascinating history. The mafia originated here, operating a business of protection and extortion around the lemon and orange groves of Palermo.

Sardinia is the perfect spot for beach lovers, enjoying more than 300 days of sunshine a year and 1,155 miles of coastline.

Upmarket resort Costa Smeralda on the island’s northeastern coast is a hit with well-heeled travellers who have cash to splash.

Big name stars including Naomi Campbell and Jon Bon Jovi have been spotted in the waterfront bars in chic Porto Cervo.

Campania and the Amalfi Coast

Luxury lovers will enjoy the Michelin-starred restaurants and five-star hotels that are dotted along the coast.

Towns such as Positano pull in the glitterati with its clutch of exclusive boutiques, while Sorrento is famous for its limoncello – a refreshing alcoholic drink flavoured with lemon.