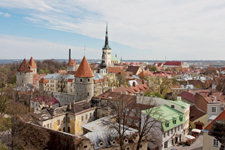 As the city break market becomes more adventurous and no-frills airlines expand their routes, new destinations in Poland, Latvia and elsewhere are challenging favourites like Amsterdam and Barcelona.

Here are our predictions for 2008’s hottest city breaks…

Following Cracow and Warsaw’s climb up the popularity stakes, Poznan is the latest city to attract international visitors. Ryanair and Wizz Air’s new direct flights have helped make this happen.

“Poznan has many historical attractions, a beautiful old market square, an abundance of nightlife, a great shopping centre in a converted brewery and is good value for money,” said Superbreak sales director Ian Mounser.

Sample package: Superbreak offers one night’s bed and breakfast at the four-star Domina Prestige hotel in Poznan from £30 per person, from January 2008. Ryanair has return flights from £20 including taxes.

Riga is a hit with stag parties. And if you’re looking for culture, the Latvian capital’s old town is a designated UNESCO World Heritage site. Its popularity is set to increase as Ryanair has launched a new route to the city from Bristol.

Sample package: Redseven offers a three-night stag weekend to Riga including activities, for £341 per person in May 2008 including flights and accommodation.

Tel Aviv has earned a reputation as a party city, packed with trendy restaurants, hip bars and clubs. Thomsonfly is the first low-cost airline to fly to the destination. It launched three times a week services to the city from Manchester and Luton on November 1.

Sample package:Thomsonfly fares lead in at £80 one-way or £140 return, including taxes. Getabed.co.uk offers two nights’ bed and breakfast accommodation at the Metropolitan Hotel from £117 per person in January 2008.

Its striking waterways are similar to those in Venice but it’s the dramatic Winter Palace that draws in the crowds. Add great shopping and nightlife to the mix, and it’s little wonder this city is becoming a top destination.

Sample package: HotelConnect offers one night’s bed and breakfast at the four-star Ambassador Hotel for £61 per person in January 2008 at weekends (£67 midweek). British Airways has return flights to St Petersburg for £252 for January 2008.

Paris is more accessible with Eurostar’s high-speed service from St Pancras International – it takes just over two hours. Clients can travel with a clear conscience as it is the first train operator in the world to provide carbon-neutral journeys at no extra cost.

Sample package:Lastminute.com has two nights at the three-star Hotel Bellevue for £117, including breakfast and return Eurostar travel from St Pancras International in January 2008.

A visitor boom is predicted for next year following Michael Palin’s BBC travel series New Europe. The old town is a UNESCO World Heritage site and is a maze of cobbled streets and medieval houses. Karja Street is lined with lively Irish-themed pubs, clubs and casinos.

Sample package:Kirker Holidays has four nights for the price of three at the five-star Hotel Telegraaf in Tallinn for £545 per person, including flights and transfers between January and April 2008.

Valencia raised its profile after hosting the Americas Cup last summer. Hotels4u.com sales and marketing director John Harding said: “Valencia has invested in making itself a tourist-friendly destination, including pedestrianised areas and a variety of hotels.”

Sample package:Hotels4u.com offers three nights at the three-star Medium Valencia Hotel in January 2008 from £69 per person. EasyJet offers return flights from £60, including taxes.

History buffs will love Porto and its ancient city filled with gothic and baroque buildings. The famous fortified wine, Port, hails from here. Ryanair is introducing a new flight from Bristol to Porto this winter.

Sample package:Mundi Color Holidays offers two nights at the five-star Infante Sagres hotel in Porto for £332 per person, including flights and transfers in May 2008.

Avoid the tours to the famous spots featured in The Sound of Music and stroll down the picture-perfect streets. Being Mozart’s birthplace, there are always concerts on offer, and don’t miss Mirabell Palace where he  performed.

Sample package:Page and Moy offers four nights’ bed and breakfast at the four-star Hotel Renaissance for £759 in April 2008, including flights, a city tour and a guide.

With the troubles firmly in the past, bars, restaurants, clubs and shops have been springing up at a dizzying rate. Exciting new plans include a lively Maritime Quarter – set to become Europe’s largest waterfront development.

Sample package:Cresta Holidays offers three nights’ bed and breakfast at the three-star Park Avenue Hotel in December for £164 per person including flights.