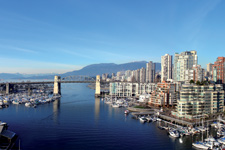 Vancouver is one of the most multicultural cities in North America, with many nationalities represented in neighbourhoods, restaurants, shops and markets throughout the city.

For travellers, exploring these cultures should be a part of any Vancouver visit, as should a stop in the fantastic ‘city lungs’ of Stanley Park, a trip on the famous False Creek and an exploration into the ancient history and arts of the Coastal People and the Inuit.

Food, too, is a passion for city dwellers and there is plenty to eat, see and do in a day. If you cram things in tight it is possible to see a great amount of the city within 24 hours. Here’s how to do just that…

08:00 From your hotel, stroll to the Seawall, south of downtown, and pick up one of the ferries that ply False Creek from numerous stopping points and head out to Granville Island.

From the end of Davey Street it is 10 minutes to Vancouver’s most popular island, where you can tuck into a hearty breakfast at the Public Market before exploring the narrow lanes and streets on the island. Filled with history, book shops, a children’s market and art studios, this makes a fascinating outing and offers a great insight into the local trades.

Take a look at the marinas on the water’s edge and, if you have time, escape the buzz, rent a kayak for an hour for a gentle paddle along the creek.

10:30 Cross the creek (by foot or on ferry) from the island and head north along English Bay Beach to reach Stanley Park, the largest city park in Canada, with 1,000 acres of temperate rainforest encircled by the harbour’s cool water. More than 200 types of bird and dozens of species of mammal live in the park, and forest paths lead through their habitat.

Alternatively, ‘go local’ and hire a pair of rollerblades or a bike to speed around the park’s circumference on the coastal Seawall Promenade, making sure you check out the totem poles, the famous Siwash Rock and Prospect Point en route.

If you have more time, take in the aquarium, with its display on the Pacific North West, Lost Lagoon or Beaver Lake to view geese, swans and racoons, and also consider the rose and rhododendron gardens, the giant saltwater pool or the open-air summer theatre.

14:00 Head back downtown and hit Robson Street for a bit of food and perhaps a brief bit of window shopping (you don’t want to lug everything around all day, so pop back later). This shopping area, one of the city’s most popular, mixes big chains (at cheap prices) and independent stores with a few places to eat along the way.

Finish up by calling into the Vancouver Art Gallery to see some of the city’s up-and-coming and already-arrived contemporary artists. Keep going south from here and you will reach Yaletown, a busy spot at all times of the day full of cafes and unusual shopping opportunities.

15:30 Walk up to Davie Village and cross Burrard Bridge to reach Vanier Park, where you will find more of Vancouver’s intellectual attractions, including the Vancouver Museum – which provides an excellent detail of regional history as well as information on Vancouver past and present – the space centre and the Vancouver Maritime Museum.

19:00 Keep walking around the coastline to Kitsilano Beach, in the west of the city, to take up a spot in one of the best places to watch the sun go down. The Watermark restaurant is a good place for a relaxing drink.

19:45 Grab a cab and head for the impressive white sails of the Vancouver Convention and Exhibition Centre, where you can view cruise ships as they prepare to set off for the Inside Passage.

20:30 Go native at the nearby Metro Restaurant, in Canada Place, where traditional Canadian cuisine can be ordered in small portions or on share platters. For a different experience try Chinatown. The bustling streets are filled with Chinese wares, making a great spectacle as well as a fantastic place to eat.

Tasty food is also in plentiful supply in Gastown, where a boom has seen many restaurants appear, including the impressive So.Cial at Le Magasin, in a 1911 building with beautiful chandeliers.

Try to take in some of the visual, literary or media arts that abound in Vancouver. Endless festivals and events are staged throughout the year – including the Jazz Festival, Film Festival, Fringe Festival and Celebration of Light fireworks competition. There are also more than 21 theatres and plenty of live music venues and nightclubs.

Alternatively, Grouse Mountain – with its late-night skiing – is a 20-minute cab ride from downtown. Meanwhile, Mount Seymour offers snowshoe packages and the chance to hear myths and legends under the night skies or enjoy ‘Night Magic’ heading through moonlit trails culminating in a chocolate fondue.

Travelpack offers three nights at the Fairmont Vancouver Waterfront this January from £658 per person twin-share, including flights with Air Canada.

Travel 2/4 offers accommodation at the five-star Pan Pacific from £39 per person per night based twin-share. Air Canada flights lead in at £533 per person including taxes.