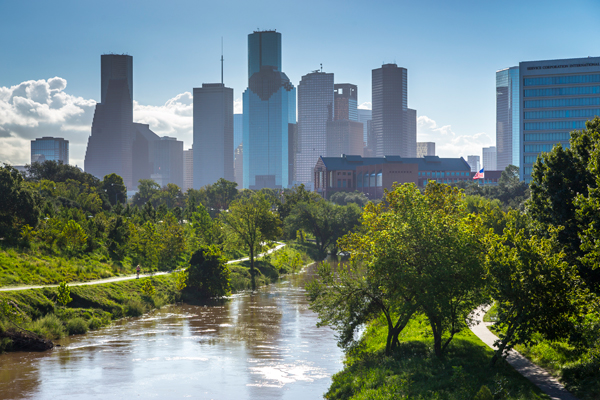 As the fourth-most populated city in the United States and the biggest metropolis in Texas, Houston might not seem like an obvious choice for a weekend getaway.

But while the oil industry, medical sector and Nasa make this a big business hub, there’s plenty for those who want to play. In fact H-Town, as locals like to call it, has undergone a transformation over the past decade, with its arts, culture and culinary scenes booming.

In summer 2015, Buffalo Bayou Park – named for the shaded, slow-moving river that wends its way below the shiny skyscrapers – underwent a £45 million makeover. Now its 160 acres offer respite from the city streets with hiking trails and bike paths dotted with fountains and sculptures.

Tax-free shopping is another draw, with international visitors able to reclaim tax on purchases.

Singapore Airlines introduced the Houston-Manchester route in October – the first direct flights from outside London – making this diverse city more accessible to visitors from the UK.

09.00: See the city from a difference perspective with a kayak tour down the Buffalo Bayou. Spot blue herons, loggerhead turtles and possibly the telltale craggy nostrils of alligators on a three-and-a-half-hour urban paddle through Downtown, Memorial Park and Buffalo Bayou Park, £38.50.
bayoucityadventures.org 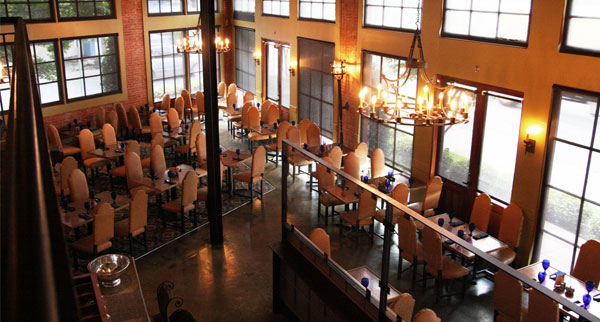 13.00: After disembarking at Sabine Street in Downtown, grab a 10-minute taxi to Montrose, where renowned restaurant Hugo’s takes regional Mexican cooking to new levels (1600 Westheimer Road). Dishes such as Oaxacan-style tlayuda – a corn tortilla with crumbly, salty cheese and skirt steak – start at around £12, while the brave can nibble on sauteed chapulines (grasshoppers). Book ahead to guarantee a table.
hugosrestaurant.net

Houston’s Downtown is surprisingly compact and walkable, but in the summer, the streets are eerily deserted

15.00: Houston’s Downtown is surprisingly compact and walkable, but in the summer, the streets are eerily deserted. It’s not that people are on holiday – they’re all going about their lives 20 feet underground, safe from the searing heat. Houston has a seven-mile network of tunnels linking 95 blocks, with food courts, dry cleaners, flower shops and even beauty salons. Enter at Wells Fargo Plaza, a 10-minute drive from Hugo’s. There are signs throughout the tunnels and even designs showing the buildings above.

16.00: Re-emerge at Wells Fargo Plaza and walk two minutes up McKinney Street to reach pretty Hermann Square. Continue through the park to the imposing ivory towers of City Hall. From there, head five minutes northeast up Bagby Street, passing the 60-foot-high glass walls of Sarofim Hall theatre and manicured Tranquility Park. On the corner of Bagby and Capitol streets, you’ll see a craggy old tree with a sign explaining the legend of ‘The Old Hanging Oak’. It’s said that at least 11 criminals were hanged from the tree during the existence of the Republic of Texas, between 1835 and 1845. 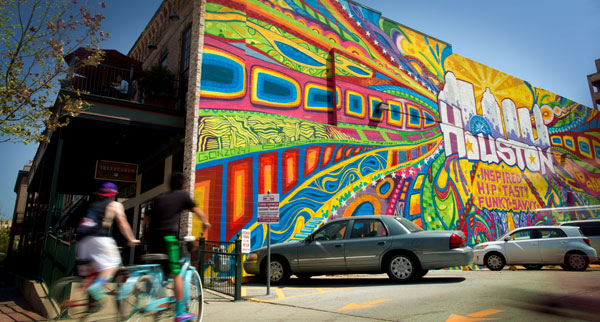 17.00: Continue up Bagby Street and turn right onto Texas Avenue then left onto Louisiana Street and right onto Preston Street. You’ll pass Market Square Park, which hosts events such as ‘blanket bingo’ and cinema screenings. About 10 minutes after setting off, you’ll arrive at the much-Instagrammed, psychedelic Houston Is Inspired mural at 907 Preston Street.

20.00: A 10-minute walk up Congress Street, right by Market Square Park, Okra is a great place to start a night out. The oval-shaped bar and barrel-vaulted ceilings aren’t the only unique features of this historic building. The bar’s proceeds go to a different charity each month, with guests allowed to cast a vote each time they purchase a drink. Around the corner on Main Street, Moving Sidewalk serves craft cocktails in a cosy setting lit by flickering candles and antique chandeliers.
friedokra.org
movingsidewalkbar.com

09.00: Head to the Menil Collection, which features about 15,000 works dating from the Paleolithic era to the present (free entry). Browse the permanent collection, including pieces by Mondrian, Joan Miró and Picasso. The building itself is a work of art: its elegant, modernist structure was designed by Renzo Piano, the architect behind The Shard and the Pompidou in Paris.
menil.org 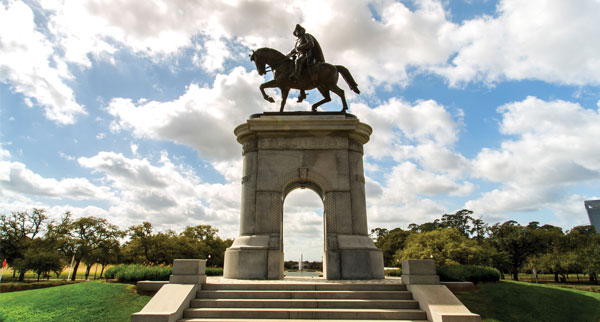 10.30: Turn right and walk half a mile down Sul Ross Street, then take a right on Montrose Boulevard. Walk another mile, passing the Contemporary Arts Museum and Museum of Fine Arts, then cross South Main Street to hit Hermann Park Drive. The Sam Houston Monument, an imposing equestrian bronze statue dedicated to the general who won Texan independence, will be on your right.

In Midtown, a half-hour walk or five-minute drive from the museum up Main Street, Breakfast Klub is one of the hottest spots in town

11.00: Directly opposite is the Houston Museum of Natural Science, which is home to humongous dinosaur skeletons, ancient Egyptian mummies, interactive exhibits on the Earth’s biosphere and a butterfly house (entry about £19).
hmns.org

12.30: In Midtown, a half-hour walk or five-minute drive from the museum up Main Street, Breakfast Klub is one of the hottest spots in town – and a favourite with Houston-born Beyoncé. It closes at 2pm, but it’s worth rushing over for all-day breakfast classics such as chicken and waffles and catfish with grits (mains from £7.50).
thebreakfastklub.com 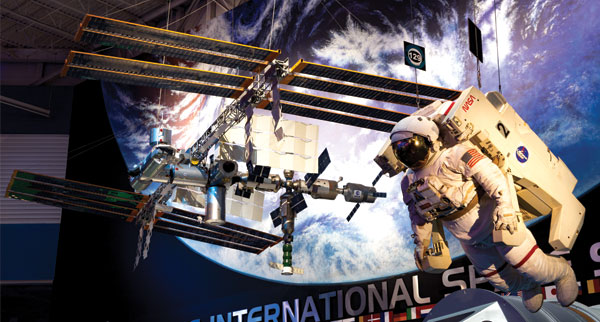 14.30: No visit to Houston is complete without a visit to outer space, so set aside a few hours to boldly go to Space Center Houston, a half-hour drive from Downtown. Ride a tram for a tour of the Space Center, getting close to Nasa’s headquarters, visit the old and new Mission Control centres, and walk through a shuttle carrier aircraft at Independence Plaza. Tickets are £19 for adults and £15 for kids aged four to 11 (under-fours go free).
spacecenter.org

Visit the old and new Mission Control centres, and walk through a shuttle carrier aircraft at Independence Plaza

20.00: After freshening up, head out for dinner. At The Galleria, South African restaurant Peli Peli is where Houston’s well-heeled eat – although you may still spot the odd cowboy boot. Innovative dishes include curry spaghetti squash and pan-seared kingklip (eel) with shredded scallops (mains from about £15). Cocktails include the South African Gentleman, a twist on the classic Old Fashioned, with molasses and espresso vodka (£9.20).
pelipeli.com

Westin Oaks Houston: This is the place for those looking to indulge in Houston’s tax-free shopping, with the hotel connected directly to The Galleria, an upmarket mall that has everything from Macy’s and Saks Fifth Avenue to H&M, Gap and designer brands such as Chanel and Louis Vuitton. The hotel has a lovely outdoor pool, while a nice touch is that guests can hire a workout kit, complete with trainers, for their entire stay for £3.85. Doubles from £90 per night.
westin.com/houston

The Whitehall Hotel: Boasting Bob Dylan, Sonny and Cher, and Barack Obama among its past guests, this historic hotel in the Central Business District has Italian marble floors and rooms with signature memory mattresses and complimentary cookies. A Preferred Hotels member, the location is ideal with the Theater District and Downtown a short walk away. Doubles from £150 per night.
thewhitehallhouston.com

Hotel ZaZa: President Nixon and Michael Jackson are among the A-listers to have stayed at this boutique property in the Museum District. Each room is unique, while the huge concept suites include Houston We Have A Problem, complete with a moon-shaped sofa. Doubles from £170 per night.
hotelzaza.com