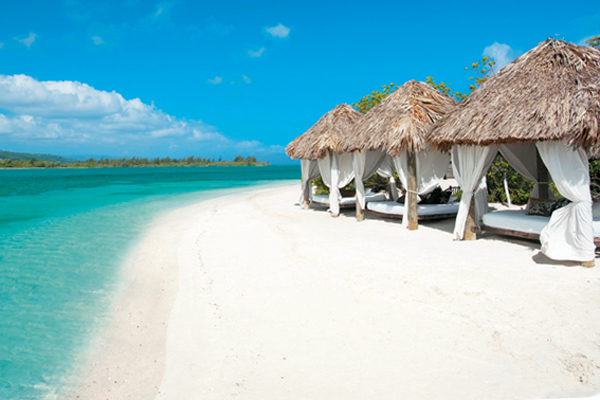 There is plenty in store for all-inclusive fans in the year ahead, finds Laura French.

Last year was a busy one in the all-inclusive world, with new properties and refurbs popping up here, there and everywhere – and 2017 looks set to be just as big. From the Caribbean’s first over-water villas to Neilson’s debut adult-only beachclub, these new resorts are upping their game and offering clients more than just a plateful of food with which to satisfy their appetites.

And as clients tighten their belts – overlooking the fact that you could have had a whole meal in Europe a few years ago for the current price of a pint – demand for all-inclusive is on the rise, according to Funway Holidays.

“Our booking enquiries for all-inclusive holidays were significantly higher this year compared with the same period last year, with the Dominican Republic up 67% and Mexico up 38%, putting them among our top destinations requested,”  says Nick Talbot, head of marketing.

Demand for all-inclusive is on the rise, according to Funway Holidays

And according to the Abta Travel Trends Report 2017, 18% of the population hopped off on an all-in break in the preceding 12 months, while a quarter intend
to do so this year.

That means there’s never been a better time to jump on the all-inclusive bandwagon and ramp up the commission. So highlight these new developments to clients seeking a hassle-free experience that will have them booking faster than you can say ‘calorie overload’.

When it comes to all-inclusive, the Caribbean certainly knows how to play, throwing its emerald-hued, white-sand charms in with high-end cuisine, world-class spas and heart-pumping activities.

Sandals has added  over-the-water villas to its Royal Caribbean Resort & Private Island, marking a first for the Caribbean

Among its horde of all-in A-listers is Jamaica, specifically Montego Bay, where AMResorts has just opened a Zoëtry Wellness & Spa Resort. 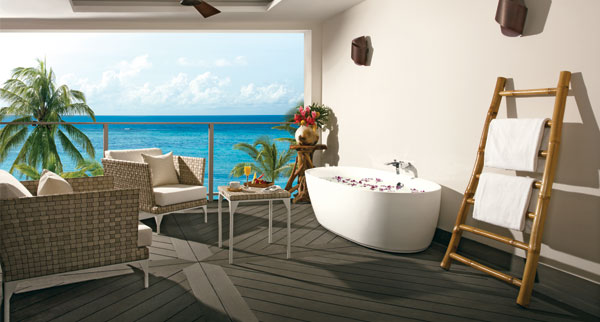 Made up of 49 suites and set on a secluded private beach, it’s a shrine to all things wellness-related, with tranquil gardens and meditation areas set around the spa and a flowing swimming pool snaking its way through the grounds. There’s also a fitness centre and three à la carte restaurants, all of which are included under the Endless Privileges concept.

Just around the corner in Montego Bay, Sandals has added  over-the-water villas to its Royal Caribbean Resort & Private Island, marking a first for the Caribbean.

Designed as Tahiti-style bungalows, they’re a good suggestion for honeymooners looking for nature-inspired seclusion with an over-the-water hammock, private infinity pool, Jacuzzi and butler all included, alongside glass floors looking down into the tropical waters. Need we say more? 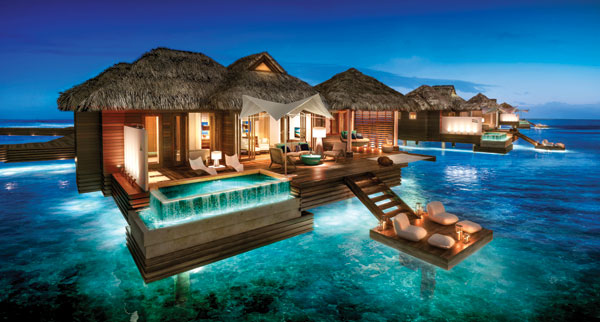 Over in Saint Lucia, the brand is expanding its offering too, with a six-star luxury Sandals LaSource hotel scheduled to open in the spring. Spread across eight hectares, it’s set to feature a Red Lane Spa, high-end shopping, an extensive entertainment offering and nine Global Gourmet restaurants.

In Antigua, the recently renovated Curtain Bluff reopened for the 2016-17 winter season with new infinity plunge pools in signature suites, an upgraded watersports area (including a new Beach Concierge service to help guests organise activities) and a redesigned Terrace Suite complete with its own spa.

If it’s a family wanting to head to the Dom Rep though, recommend the new 391-suite Dreams Dominicus La Romana

The Dominican Republic has welcomed the Secrets Cap Cana Resort & Spa, by the white-sand Juanillo Beach, which offers swim-out suites alongside complimentary newlywed and anniversary packages – an easy sell for loved-up couples.

If it’s a family wanting to head to the Dom Rep though, recommend the new 391-suite Dreams Dominicus La Romana, set on a beach in Bayahibe. It features kids’ and teens’ clubs as well as activities such as tennis, aerobics and beach volleyball. It’s worth highlighting to parents wanting a bit of alone time that there is an adult-only restaurant, a 10,000sq ft spa and nearby championship golf courses, which give it multi-generational appeal.

Like the Caribbean islands, Mexico gets straight As when it comes to all-inclusives, and the Riviera Maya has it down to a tee. Hard Rock Hotels is adding a bit more pizzazz this year with an adult-only Unico resort. Designed to incorporate local culture into the hotel experience, it will feature local staff and a flexible, no-itinerary-necessary approach, with the aim of immersing guests in all things Mexico.

Culture and history tours will be on offer to take them off the beaten track, and there’s also a beauty salon and barber shop complete with a cocktail cart –
in case the rest wasn’t enough to entice your clients.

Set on a private golf course amid soaring mountains, the upgraded property is a family-friendly abode with a concierge dedicated to creating tailor-made programmes for those with younger ones – so mum, dad and the kids can burn off the calories gained from the seven à la carte restaurants (including one by Michelin star-rated chef Martin Berasategui).

Closer to home, there’s also been a fair amount going on in the world of all-inclusive, with Thomas Cook increasing its offering in the sector by 20% for summer 2017 (excluding Turkey, Egypt and Tunisia).

“Many of our holidaymakers are opting for all-inclusive holidays so they are less impacted in terms of higher costs in resort,” says Vanessa Freeman, regional product manager for Greece and Cyprus.

The company is preparing for the May launch of its Sentido Acacia Marina in Sicily, an adult-targeted four-star that signifies its first own-brand hotel on the island. Located in the former fishing village of Marina di Ragusa, it has a focus on Sicilian cuisine, and is a good suggestion for couples on a tight budget, with prices from £595 per person for a week. 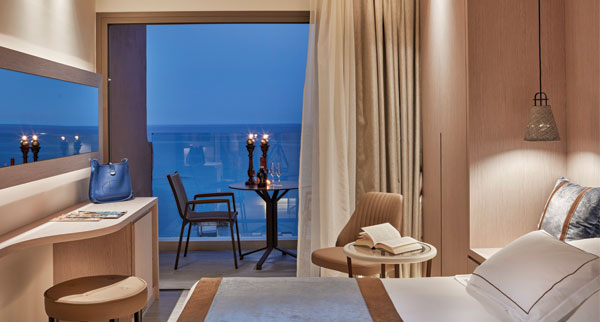 But according to Freeman, it’s the Canaries, Cyprus and Greece that – despite not always having been associated with all-inclusive – are growing most rapidly in popularity.

“Many of our holidaymakers are opting for all-inclusive holidays so they are less impacted in terms of higher costs in resort,”

The latter has been particularly active; in Kalithea, the four-star Amada Colossos Resort is undergoing a $40 million makeover ready for its first outing in the summer – expect bright patterned bedframes, low-hanging lights and other stylish features.

The much-lauded Ikos Oceania in Halkidiki reopens in April following a refurb that will see new suites unveiled (including interconnecting family rooms) and all restaurants, existing rooms and public areas upgraded. A pool bar, beach bar, spa treatment rooms and indoor pool have been added too, so it’s worth suggesting to clients looking for a higher-end European stay. 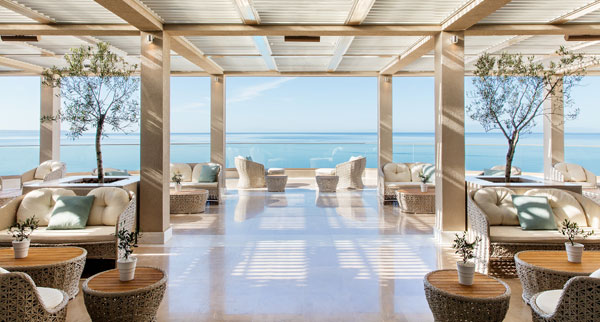 For a similar price (on a club board basis) in a similar area, active types might be interested to hear of Neilson’s new adult-only Buca Beachclub in Analipsi. Next to the Messini Beachclub, it shares a beach and activity programme with its older sibling, but has its own child-free options such as yoga. There’s an à la carte menu that diners can plough through alfresco, to a backdrop of mountains and starry skies.

Despite the slump in demand for Turkey, some resorts are ploughing ahead with updates, including Lux Bodrum Resort & Residences, set to swing open its doors in May. Built on a private peninsula amid pine trees and hills, it’s a boutique affair set in exotic-looking surroundings overlooking the opal-coloured Aegean, with 60 rooms and 25 residences in its grounds. 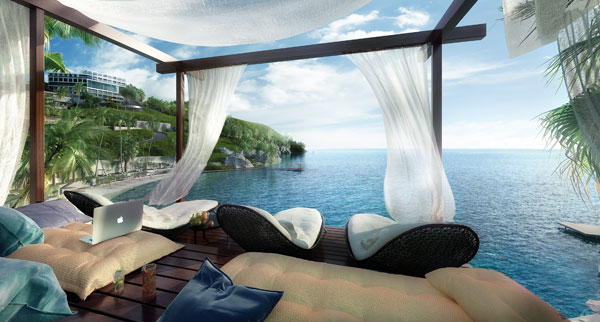 There’s plenty to occupy guests on site, including various wellness services, but the resort’s proximity to various Greek and Roman cultural sites means it’s not necessarily the type of all-inclusive where you don’t budge for two weeks, and guests can while away the hours hopping between the surrounding bays.

Turkey also welcomed new brand Tui Blue’s first properties last May – Sarigerme Park, on the Aegean, and Palm Garden, on the Turkish Riviera – both of which offer all-inclusive.

Eastern Europe isn’t being forgotten either. The Family Life Nevis Resort will pop up in Bulgaria’s Sunny Beach this year with a kid-orientated offering that includes a splash zone, spa and family suites for up to six people (bookable through Tui and featuring all-inclusive as an option).

For all-out luxury, nothing beats the Maldives, of course, and Ozen by Atmosphere, which opened in July, is about as good as it gets.

For all-out luxury, nothing beats the Maldives, of course 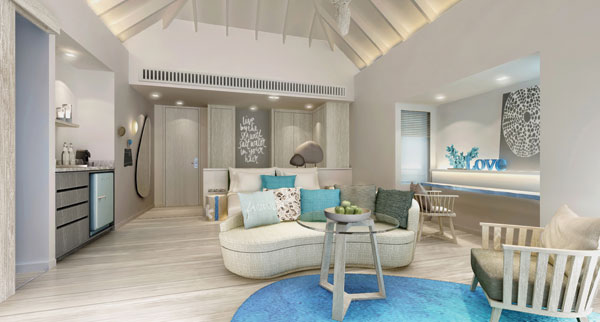 On the island of Dhidhoofinolhu, Lux South Ari Atoll reopened in the summer following a beach-inspired facelift that involved the renovation of bars and restaurants, and new concepts such as a creative photography workshop.

In Mauritius, the Sensimar Lagoon in Anse La Raie, on the northern tip of the island, has also been refurbished and is open for business with a new look, additional luxury rooms (complete with whirlpool baths) and terraces overlooking the turquoise sea. 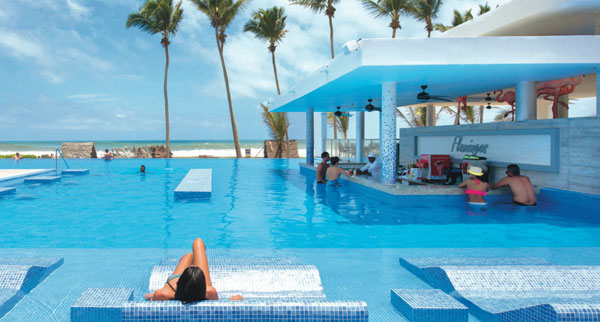 In Sri Lanka, a Riu hotel opened in August, marking the brand’s first foray into Asia. Located in Ahungalla, on the island’s southeast coast, the
501-room five-star hotel offers 24-hour all-inclusive service. Overlooking the beach, it features two buffet restaurants, four bars – one of which is
swim-up – and a Pacha nightclub, ideal for younger clients wanting to let their hair down.

Asia might not be your first thought when you hear the phrase ‘all-inclusive’, but things could be changing, and the island of Phu Quoc – Vietnam’s rising star and the buzzword of the moment – will soon be home to the all-inclusive Fusion Resort. 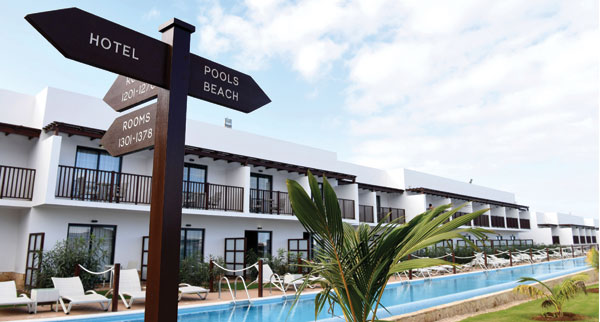 Launching in spring, it will comprise 87 thatched bungalows, villas and suites set in a private bay, with spa treatments included in the price.

Asia might not be your first thought when you hear the phrase ‘all-inclusive’, but things could be changing

The 600-suite resort will be adorned with tropical gardens, and there’s a Japanese teppanyaki restaurant on site where guests can indulge before balancing out those extra calories with a dip in the large pool
down at the beach club.