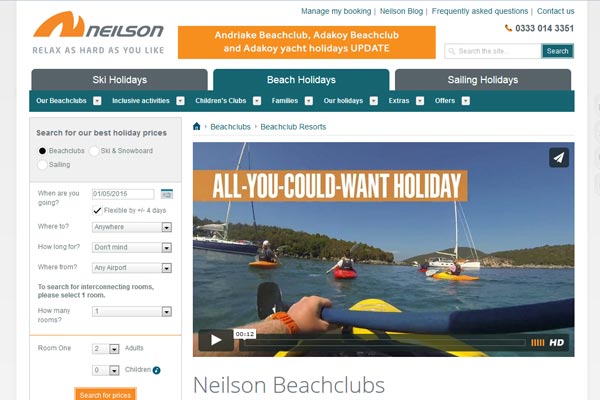 Beachclub and ski specialist Neilson is poised to secure its first properties in the western Mediterranean for 2018 and is looking at opportunities to move into long-haul destinations.

The Balearic Islands and Italy are likely destinations for new beach properties, with the operator saying it expects to announce two or three for next year’s summer programme.

Chief executive David Taylor also revealed Neilson is in talks about potential opportunities in the Caribbean and Mauritius.

“Given our heritage we’ve found opportunities easier to come by in Greece and Turkey,” he said.

“But I’m driving hard to move us away from that so we end up with growth spread across the Med and there’s less risk for us and more choice for our customers.”

Three years on from Neilson’s buyout from Thomas Cook, Taylor was optimistic about its prospects, saying it has its “best-ever summer programme on sale” after opening resorts in Croatia and Sardinia.

On the potential to move into long-haul, he added: “East and west Caribbean is an obvious opportunity and we are also looking at the Indian Ocean.

“It would be really exciting if we can find something that works in either of those two destinations.”

Taylor described the fall in value of the pound since the Brexit vote as “not a disaster” but admitted it meant Neilson would “take a hit” this winter.

He added that a conversation about surcharging customers, as rival Mark Warner has done, was “literally over in seconds” because “it was not the right thing to do”.

Taylor said he sees scope for Neilson to take advantage of a growth sector, adding: “People are taking more frequent and active holidays.

“We are a 90,000-passenger business in a huge market and feel there’s latent growth in the UK.”