Fall in love with the Spanish capital, then move on to its nearest neighbours, says David Whitley.

Madrid is one of those cities where you can happily forget about getting out of bed before 10am. The Spanish capital may have some world-class museums and handsome Habsburg architecture, but it is at its best post-10pm as the seemingly millions of tiny bars – each with their own character, and most doling out tapas with the drinks – teem with life. It’s an energetic taste of how different Spain can be once you head away from the coast.

Easy access from several UK airports makes Madrid an obvious city break choice, but the capital can also be used as a hub for exploring central Spain. Several fascinating cities are within easy reach, either because they’re practically on the doorstep or because high-speed rail has made them supremely accessible. Hopping between these cities is a fantastic way of getting to know the country beyond the beaches – and makes it extremely tricky to avoid falling in love. 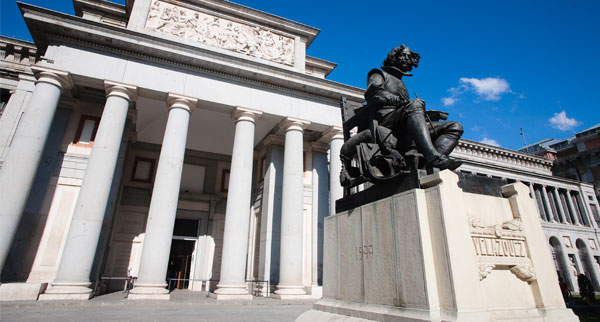 For art lovers, there are few better cities on earth than Madrid. A trio of indisputably world-class art museums – the Prado, the Thyssen-Bornemisza and the Reina Sofía – form a triangle in the city centre, and you can spend the best part of a weekend mooching through them. If picking just one, then the Prado has most of the big hitters (it’s particularly strong on Goya and Velázquez), while the Reina Sofía has Picasso’s masterpiece Guernica and a strong Dalí collection. Attraction World offers a guided visit (with queue jump) to the Prado from £35 a head.

The art can be complemented by the other key traditional tourist site, the royal palace. It’s a guilelessly chunky, stocky affair from the outside – all heft and no flair – but gets far more impressive inside. The plain exterior gives way to a lavish, no expense spared interior, with the absurdly OTT throne room the highlight of the tour.
patrimonionacional.es

But the real seat of power in Madrid isn’t the palace, it’s Real Madrid’s Santiago Bernabéu stadium. Getting a ticket to see the most successful football club in history play at home is likely to take some underhand craft, but when there’s no match on, it’s possible to go on a tour of the stadium. The visits take in the changing rooms, a wander out onto the pitch and the view from the very top tier of the surprisingly steep-sided arena.
realmadrid.com 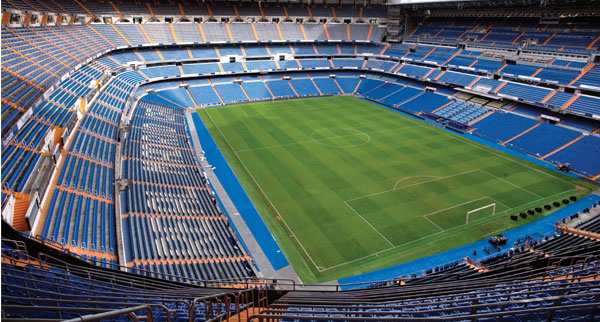 A museum-like section inside the stadium is a shameless exercise in propaganda, running through the history of the club, its greatest players and its proudest moments. It can, however, get away with this when it can nonchalantly display a room full of European Cup and Champions League trophies won by the club.

But Madrid’s charm doesn’t lie in any specific attractions; it is best appreciated by following your nose and gently mooching through. The grand synchronised architecture of the Plaza Mayor is a marvellous starting point, while the Chueca district and Calle Cava Baja are the best bets for tapas bar crawling. 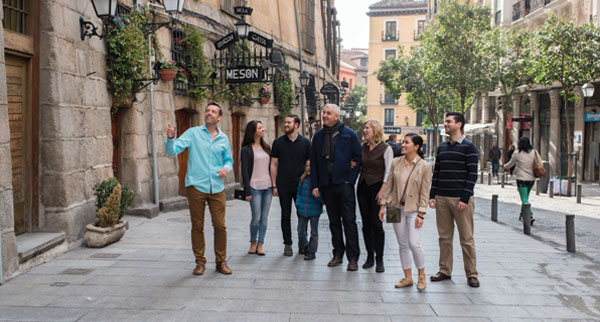 Many bars will hand out free tapas when you buy a drink, but the best feeds are paid for. If help is required navigating the menus and best joints, there are plenty of food tour options in the city.

Madrid has more than its fair share of hip hotels, and the Room Mate Óscar is a fine, affordable example. The rooftop terrace offers tremendous city views, and has a small pool during the summer months (it’s decked over in winter). The hotel is heavy on the design pedigree, with gorgeously curving furniture, omnipresent backlighting and bold frosted-glass shower cubicles in full view of the bed. Rates start at €116.
oscar.room-matehotels.com 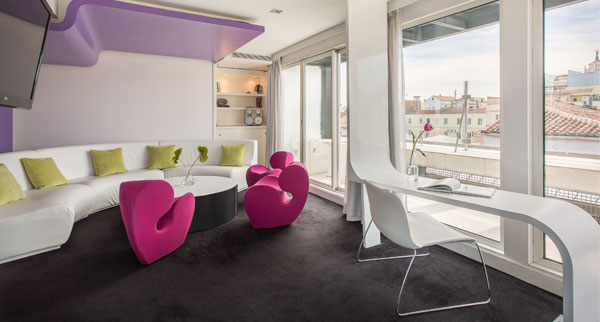 The best hotel pool in town is to be found at the Hotel Wellington, which looks like a slightly dated, old-fashioned five-star at first glance. But it has plenty of quirks – stained glass windows, model cows dressed up as bullfighters, a rooftop vegetable garden and an English-style pub that has way more atmosphere than a bog-standard hotel bar. The on-site Japanese restaurant was the first in Spain not serving Spanish food to get a Michelin star, and several of the hotel staff have been there for donkey’s years – service is a strong suit. Doubles cost from €165.
hotel-wellington.com

At the luxurious end of the scale, the Hotel Urban is a remarkable effort, with enough anthropological artefacts to fill a small museum. Carved wooden house posts from Papua New Guinea, Cambodian sculptures and Chinese figurines dot public areas, while the rooms have a sumptuous richness. Shimmery golden net curtains, dark leather couches, teak panelling and flip-up mirrors in the desktops add to that finer things in life feel. There’s also a rather lovely rooftop terrace with small pool. Doubles cost from €185.
hotelurban.com 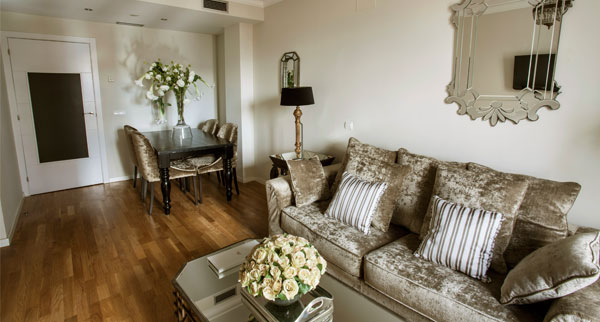 For something rather more family-friendly, the Splendom Suites Gran Vía pulls off the aparthotel concept with more pizzazz than most. If children are staying, Mickey Mouse cushions are put on the beds, while there’s a games room on the first floor with a kid-friendly miniature pool table and a whole host of toys.
The design is minimalist, but the facilities are great, with the full kitchens and washing machines being particularly useful. Studios cost from €120. splendomsuitesmadrid.com 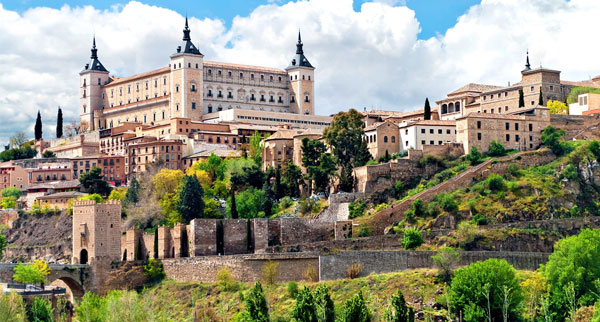 The traditional day trip from Madrid is Toledo, just to the south. While Madrid has been Spain’s political capital since the 16th century, Toledo has long been the religious capital.

It’s a hugely picturesque city, with a labyrinth of narrow streets, full of medieval buildings and monasteries. Roman baths, mosques, sword factories and art museums mix in with Gothic spires and Moorish-inspired entrance gates. There’s a lot concentrated in a small space, although if you head out of the old centre you’ll find some sublime riverside and hilltop views within a mile or so.

The cathedral is the main attraction, swathed in some of the most extraordinarily detailed decoration you’re ever likely to see. There’s also a top-drawer art collection inside the sacristry, with works by van Dyck, Caravaggio and Velázquez. It’s the collection of El Grecos that really makes it special, though. 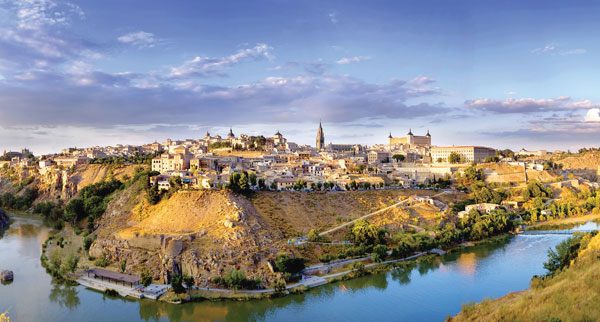 There’s also the Alcázar, which throws in the staples of a good castle and a solid overview of Spanish history inside.

But when it comes to castles, Segovia is hard to beat. Thanks to the high-speed rail link, Segovia is just over half an hour from Madrid by train, and its Alcázar is straight out of a fairy tale. Drawbridges, witches’ hat turrets and a position high on a precipice overlooking the great plains make it look spectacular from the outside.

It’s cold, stone bleakness inside until you get into the more decorative rooms, such as the main hall where models of all Spain’s kings and queens sit in golden thrones just below the ceiling.

Segovia is a thoroughly enjoyable city just to hang out in, but it also has one more world-class attraction – an astonishing, unmissable Roman aqueduct that spans two hills. The monument is even more impressive once you realise there’s no mortar holding it all together. 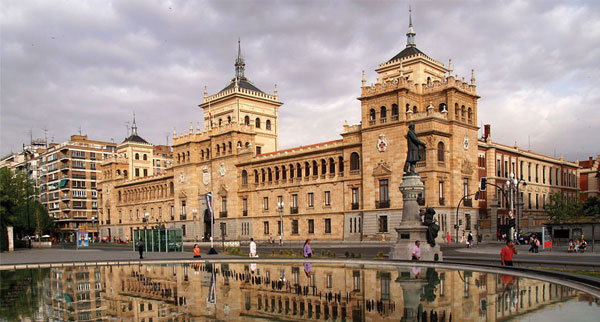 Another half an hour along the same line is Valladolid, a consummately Spanish city that is all but obsessed with suckling pork and lamb. Nothing here feels like it’s just for tourists, but there are three excellent attractions. The Casa Museo Colón works best for those who can speak Spanish, and does a fine job of delving into Columbus’ voyages to the Americas. The Museo Casa de Cervantes is where Don Quixote author Miguel de Cervantes lived. And the Museo Nacional de Escultura is full of eye-poppingly intricate wood sculptures, pilfered from churches and monasteries around the region.

Osprey Holidays offers a two-night stay at the four-star Hotel Opera in Madrid, with flights from Gatwick departing March 23, from £220.
ospreyholidays.com