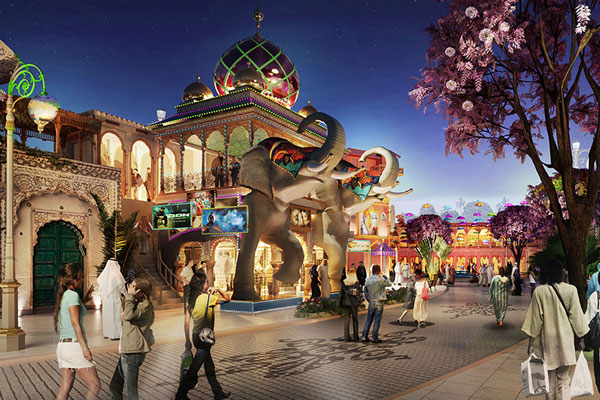 When Hollywood met Bollywood? Samantha Mayling is one of the first Brits to experience the magic of Dubai Parks and Resorts.

The Magic Kingdom in Florida is the place to meet Mickey Mouse and friends – but now the desert kingdom of Dubai is where you can spot Shrek, Kung Fu Panda and The Smurfs.

You can also join Ghostbusters busting New York’s spooks and ride the bullet train from The Hunger Games.

Having opened at the end of 2016, the £2.8 billion Dubai Parks and Resorts development is the latest stage in Dubai’s bid to become the Orlando of the Middle East. It’s the biggest theme park in the region, with more than 100 rides and attractions across three theme parks and a water park.

Hollywood characters can be found in Motiongate Dubai, the first collaboration between three studios – Columbia Pictures, DreamWorks and Lionsgate – while stars from India’s film industry can be seen at the all singing, all-dancing Bollywood Parks Dubai. The third park is the seventh Legoland in the world, with an attached water park.

And, like Orlando, Dubai is becoming a hub for international theme parks. Dubai Parks and Resorts has already broken ground on work for a Six Flags Dubai to open in 2019, with 27 rides and attractions. IMG Worlds of Adventure – with characters such as Spider-Man, Thor and The Avengers – opened last August, just 30 miles away, and IMG Worlds of Legends – scheduled to open by 2020 – will feature the likes of Bob the Builder, Teenage Mutant Ninja Turtles, Dora the Explorer and SpongeBob SquarePants.

Furthermore, neighbouring Abu Dhabi is home to Ferrari World Abu Dhabi and has announced plans for a $1 billion Warner Bros theme park to open in 2018. 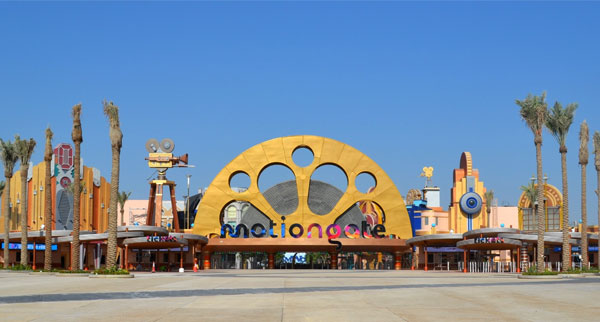 The flurry of openings is part of a drive to develop attractions and infrastructure ahead of the next World Expo, taking place in Dubai in 2020.

The UK plays a key role. About 1.4 million Brits visited in 2016, making it Dubai’s third-most important overseas market, after the Gulf region and India.

In its first full year, Dubai Parks and Resorts expects 6.7 million visits, many from the local market. By comparison, Disney’s Magic Kingdom in Orlando alone has more than 20 million visitors a year, and the parks in Orlando attract about 70 million annually.

The look and feel of the new Dubai Parks and Resorts is similar to the Orlando attractions and key members of the management team are Disney and Universal veterans. But there are plenty of differences, partly because Dubai is also looking eastwards to China and India for many of its inbound tourists.

It means British visitors will feel at home, seeing household names such as Shrek and Legoland, while attractions such as the Bollywood theme park add an exotic twist.

However, the daily character parades popular in Orlando are not regular features here, and queues build up quickly for photo opportunities with characters and for the rides. Visitors with a Q-fast ticket, however, can jump ahead.

There is on-site accommodation in the Lapita hotel – part of the Marriott Autograph Collection – and free coaches from other Dubai hotels, taking 30 to 45 minutes. Flight times from the UK are similar to those to Florida, although Brits will most likely visit Dubai in the winter.

The first rides to open were more family-friendly than white-knuckle, but there’s plenty in store to keep adventurous teens on side. 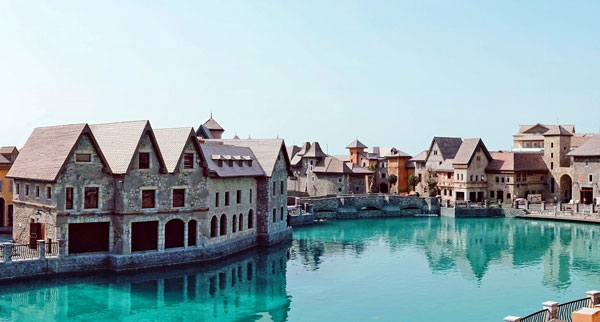 The gateway to the theme parks features four zones with 50 shops and restaurants, set alongside a river. It’s made up of:

French Village: based on France of the 1600s.
Boardwalk: based on 1950s America.
India Gate: Asian-themed outlets around a sculpture of Bollywood dancers’ hands.
The Peninsula: a venue for festivals and concerts, in 19th century style.

Brits will find familiar brands, such as Boots, McDonald’s and Starbucks, plus brands unknown in the UK, but most sell the usual burgers, fries and ice cream. There is also an Irish themed pub.

Signs are in English and Arabic, everyone speaks English, and there is a veritable United Nations of staff wearing name badges with their country of origin. I spotted workers from as far afield as Scotland, Macedonia, Nigeria and Australia. 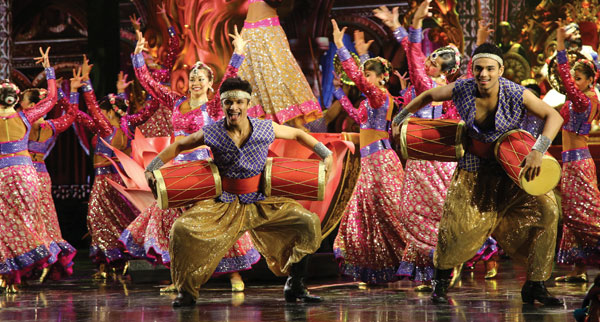 In a nutshell: The world’s first Bollywood theme park.

The virtual-reality panoramas are enhanced by moving seats, water, smoke and aromas – plus startling leg-tickler effects.

Best of the rest: For a taste of traditional singing and dancing, the 856-seat Rajmahal Theatre stages shows to rival any West End production – and keep an eye out on the streets for the chance to join a troupe of performers.

The most surprising, quirky highlight was Lagaan: The Thrill of Victory, a 4D steam-punk cricket rollercoaster ride based on a Bollywood sports movie.

Sell it: The park is mainly designed for the Indian market, but you don’t need to be a Bollywood aficionado to enjoy it.

Fans of the UK Bollywood scene will relish the chance to meet familiar faces, but newcomers to the genre can have just as much fun discovering the razzamatazz, bling and exuberance of India’s film industry. 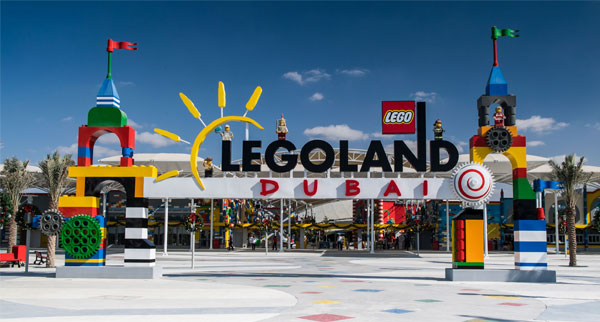 Miniland is indoors and air conditioned, making it an ideal respite from the heat,
when summer temperatures can reach 45C.

It features Dubai’s iconic skyline and Middle East landmarks such as the Pyramids and Taj Mahal.

You can also see the tallest building in the world, Burj Khalifa, which, naturally, is the world’s tallest Lego construction.

Best of the rest: As we visited in December, there were festive Lego models, including a sleigh with life-sized reindeer and Lego Santa.

Sell it: It offers everything that Legoland is famous for – plus guaranteed sunshine and a water park oasis in which to cool down.

We were there in winter, so it was a gloriously sunny 26C by day, ideal for sightseeing and perfectly warm at night. 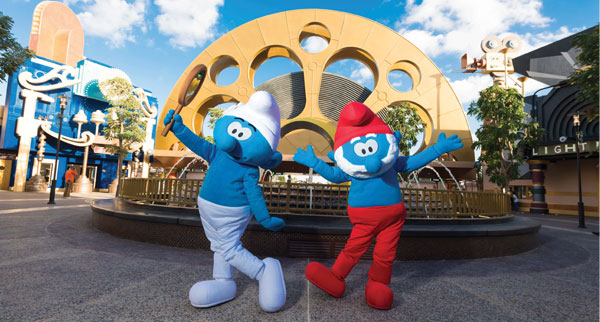 In a nutshell: With its entrance gate shaped like a huge film reel, Motiongate celebrates Hollywood movies, with zones for Columbia Pictures, DreamWorks Animation and Lionsgate studios. It features 27 rides and attractions, including five rollercoasters.

Details: The indoor attraction based on DreamWorks films (Shrek, How to Train Your Dragon, Madagascar and Kung Fu Panda) opens later this month, offering 11 rides.

Judging by the long queues that developed within seconds of a character appearing for photo opportunities, it will be popular.

The Lionsgate zone will also open fully in spring, offering visitors the chance to experience the Hunger Games franchise. It also features a live hip-hop dance show inspired by the Step Up film series, in a 1,000-seat art deco-style theatre.

The Columbia Pictures zone boasts a Green Hornet rollercoaster, Ghostbusters ride, a 4D vampire adventure based on the Underworld film, and a gentle Hotel Transylvania ride.

The film Cloudy with a Chance of Meatballs has inspired an indoor play zone and a river ride. 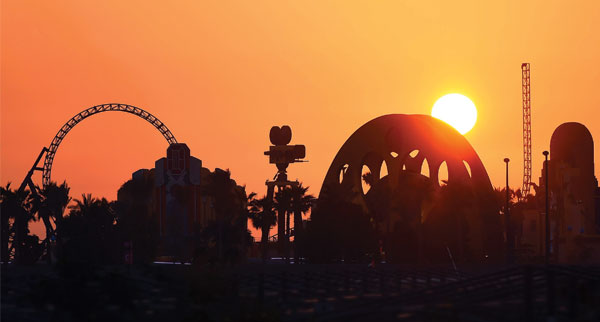 My loudest shriek came with the Underworld 4D ride. Spoiler alert: make sure you have your 3D glasses on right from the start, and have bare legs to get the full effect of the leg ticklers…

Best of the rest: With mushroom-capped houses and blue-skinned characters, the Smurf Village also features a rollercoaster for primary school-aged kids, a soft play area and animated show.

Sell it: This zone features the best-known characters for the British market, which cannot be found anywhere else.

Although Dubai prices are not cheap, flights and park tickets compare well with Orlando, so the destination offers an ideal winter alternative. Staying at Lapita, the 501-room Polynesian-themed hotel, means guests can walk to the parks, and qualify for free Q-fast tickets to beat the queues.

Book it: Gold Medal offers five nights at Lapita hotel, four-day entry to Dubai Parks and Resorts and flights from Heathrow, from £1,069 based on a family of four, valid August 16-24.

Agents can train online and log bookings at dprrewards.co.uk and as a reward they can claim two free tickets.

Dubai Parks and Resorts, Qantas and the Lapita hotel are offering two incredible holidays for 10 people to see
the parks first-hand! Enter at:
comp.travelweekly.co.uk/dubai