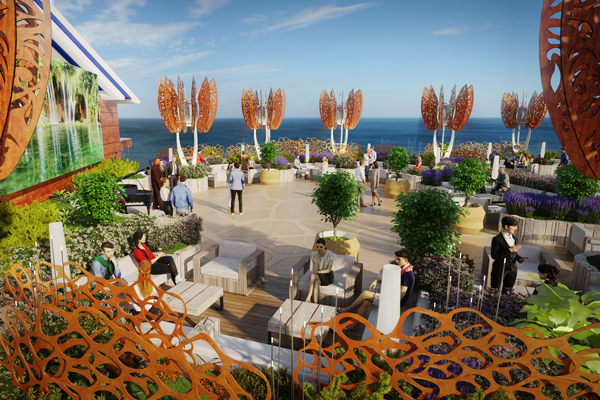 Celebrity Edge will do for the line what its previous Solstice class ships did – only “on steroids”, according to the UK, Ireland &‎ Asia managing director.

Speaking at an event in Miami ‎to reveal initial details of the new Edge class of ships, which will begin sailing in December 2018, Jo Rzymowska said: “Our Solstice class really moved the Celebrity brand forward, but Edge will do that again and more.”

She said the UK & Ireland currently accounted for 15% of Celebrity’s total sales and while it won’t account for quite that proportion for Edge’s first winter season in the Eastern and Western Caribbean, she believed the market would absolutely reach 15% once the ship’s summer 2019 itineraries, and the deployment of the second Edge ship in spring 2019 have been revealed.

Rzymowska said she was making the best case she could for an Edge class ship to be deployed in Europe.

“The deployment hasn’t been announced yet for summer 2019 and ships beyond that but because Europe is so key for us, I can say that at some stage Edge will definitely be in Europe,” she said.

Rzymowska said a new Edge training module on Cruising for Excellence was about to go live and that the Celebrity call centre would stay open tonight two hours longer than usual, until 10pm to take bookings.

She said: “We hinted to agent partners that there would be more suite class accommodation on Edge than usual (12% compared to the normal 5% on a Celebrity ship) and encouraged them to take pre-registrations. So we will take those bookings tonight to help out our trade partners.”

Rzymowska said she hoped to take key trade partners to the launch of Edge at the end of 2018.