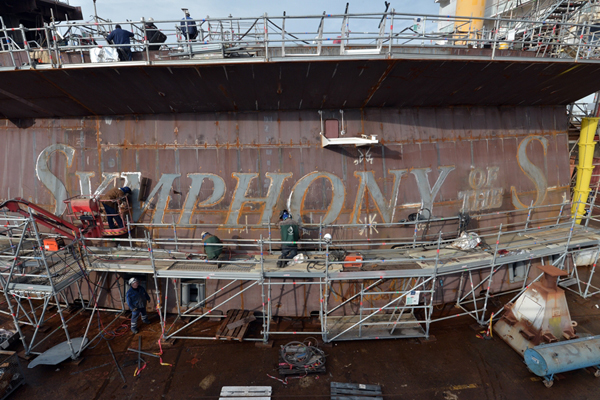 The global cruise industry has 74 new cruise ships on order between now and 2027, totally $51 billion dollars.

Seventy-one of the new ships will be built by European shipyards, although some orders are starting to go to new yards in Asia.

Presenting on the first day of the Seatrade Cruise Convention in Fort Lauderdale on Tuesday, Vago, whose own company has 11 (please check number) ships on order, said:

“We’ve never seen the order books look so healthy. This is a true commitment of long-term investment in the sector. Every brand has a ship on order. Some more than others but still, everyone is building and innovating.”

Seatrade delegates heard how the global cruise industry would welcome more than 25.3 million passengers in 2017, all demanding greater personalisation from their cruise.

Clia president Cindy D’Aoust told the audience the demand for cruising had jumped 62% in the last 10 years and said it would add another 200,000 passengers to the sector over the next 10.

She also pointed out the sector supported over a million jobs and contributes $117 billion to the economy.

Royal Caribbean Cruise Line chairman and chief executive Richard Fain said this figure would persuade the US administration to “encourage not discourage” the sector.

“The Government is more unpredictable today, but people see the benefit that the cruise industry contributes to the economy, and so while no-one can predict the future, I am confident are aren’t going to be as affected as some.”

Vago pointed out that the Whitehouse and Trump administration was not the only authority to impact the sector.

“It’s not just Washington. Brussels is actually  more of a driver for our industry, certainly in regulatory terms.”