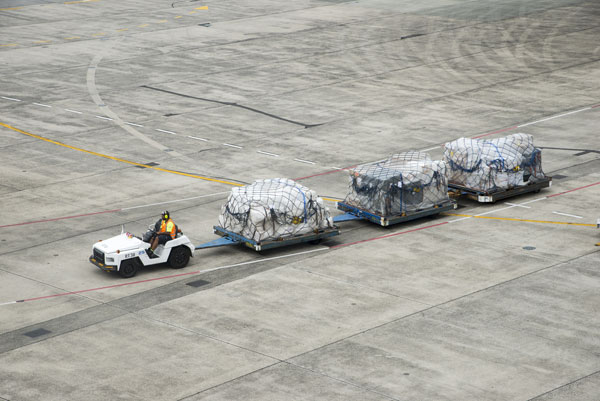 Baggage handlers are under investigation after two were caught on camera carelessly tossing luggage as they unloaded an easyJet aircraft.

Suitcases were thrown onto a truck with two crashing onto ground at Luton airport after the arrival of a flight from Copenhagen on Monday.

Menzies Aviation, the firm which handles baggage for the budget airline at Luton, called it “unacceptable” and said an investigation was under way.

The incident was recorded on a phone by tattoo artist Jonas Ozolins, from Sweden, who said the lack of respect for people’s possessions was “terrible”.

He told the London Evening Standard: “Me and my brother were watching the plane parking next to the gate and the staff started to unload.

“The two gents parked with the luggage vehicle and started unloading. The first bag was thrown at the back of the truck. My first thought was that he misjudged the throw and that it was an accident.

“Then the other bags kept flying. I got my phone and started recording to help the owners of the bags if something valuable got broken.”

He added: “I travel a lot in my work, with expensive equipment that provides my living and I saw myself in the owners’ position. I got really upset by the unprofessional behaviour.”

A spokesman for the company said: “Menzies Aviation considers the safe conveyance of passengers’ luggage to be a matter of the highest importance. The behaviour displayed in this video is unacceptable.

“We will take whatever action is necessary to ensure that such behaviour is stopped, and our professional standards are upheld properly in future.”

Luton airport and easyJet said they were working with the handling company.

EasyJet added: “We work closely with all of our airport partners to ensure our passengers’ bags are handled securely.”