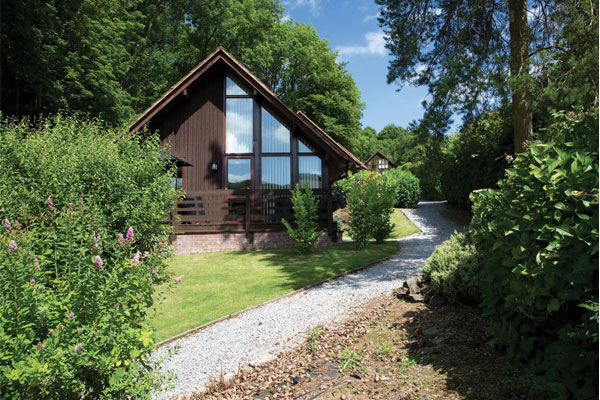 Juliet Dennis gets back to nature with a family break to Hoseasons’ Wanderwood park in Exmoor.

Take your kids out of the big smoke. Deposit them in a rural location. Leave the toys at home. Listen, watch and wait. Prepare to be amazed by just how much fun they have.

I never thought I’d be able to take my six-year-old twins Joe and Nina to a rocky beach with no sand, no ice-cream seller, and no Punch and Judy or donkey in sight, without moans about stones in their shoes, falling over and hurting themselves and the words every parent dreads: “I’m bored, Mummy.”

How wrong I was. Minutes became hours as they hunted for fossils, crabs, shells and colourful stones and explored rock pools at Kilve Beach in Exmoor, west Somerset. They spent ages by a muddy pool, negotiating how to get across from the bank to the reeds on the other side, eventually holding hands while one walked through the water and the other tried out the stepping stones. I could barely tear them away to eat a picnic lunch. 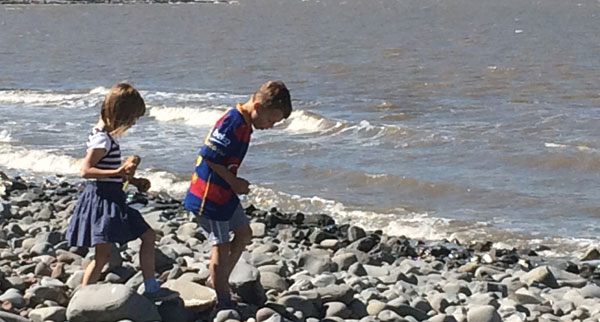 Only days earlier we had visited the famous Tarr Steps, which have recently been rebuilt after being swept away by floodwaters. After walking across the ancient stone bridge, shoes and socks were discarded for a paddle in freezing cold water. Seriously? Were these the same two city kids who only a few years back wouldn’t go barefoot on a sandy beach?

The same day we walked uphill for half a mile to the highest point on Exmoor, Dunkery Beacon, in Exmoor National Park. In fact, Joe ran all the way, his little muscly legs disappearing ahead of us in a haze of purple heather to reach the stone beacon. After climbing the beacon several times, the kids decided to use the stones to write their names on the ground. Who needs toys or building blocks when you have huge stones? 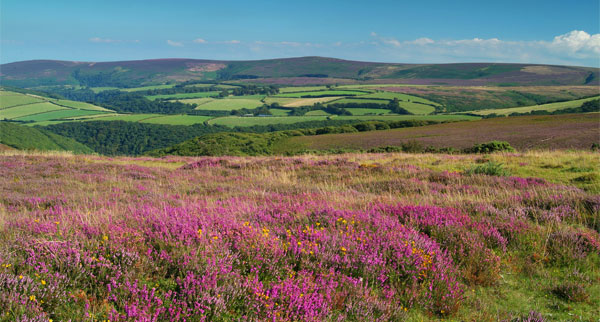 Hoseasons’ Wanderwood brand, launched last year and offered at 10 locations nationwide, aims to show families and couples the joys of the countryside by offering affordable, back-to-nature escapes at woodland-based lodges, with pets welcome for free at each location. It certainly worked for us.

We stayed at Exmoor Gate Lodges, which is not what you would expect from a typical holiday park. It’s a small site, but fits perfectly with the operator’s back-to-nature brand. The six Scandinavian-style lodges, most of which sleep five but one of which sleeps up to nine, are perched behind each other on a slope facing the hills of Exmoor.

There is a small play area, a games room, gym and swimming pool, which can be privately rented for two-hour slots, and Alpacas grazing on the field opposite. Two of the lodges accept pets.

It’s the perfect rural retreat, with no on-site entertainment other than what you provide. Owners Gary and Di pride themselves on providing a quiet and comfortable retreat for guests, and were always on hand if we needed help. 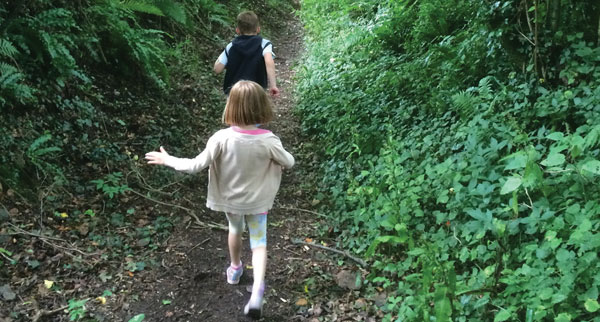 On our first day, Gary suggested a two-mile walk for us to take from the lodge. I was slightly nervous that Joe and Nina wouldn’t cope well with the steep hill, but yet again they proved me wrong.

We set off through thick woodland over a bustling stream and through the tiny village of Waterrow before trekking up a steep track. The views, of course, were worth every second of huffing and puffing. We drank them in.

Back at the park, we did indulge in one luxury; our lodge had a hot tub. Not much can beat soaking weary limbs after a long walk while overlooking nothing but a dark, dense forest, fairy lights blinking above your head. Pure bliss. 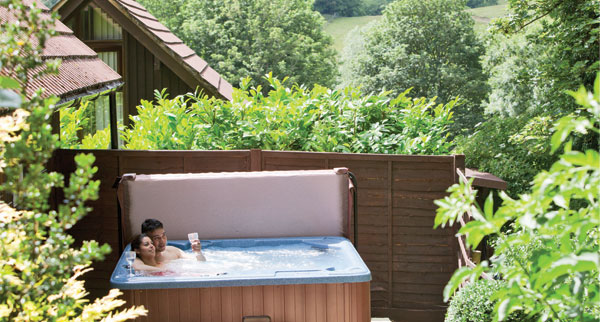 For Joe and Nina – whose love of Jacuzzis started on their last holiday and has become forever associated with our trips away – it was the icing on the cake. Every morning they jumped out of bed and pleaded to get straight into their swimming costumes and into the hot, outdoor bath. It became their morning and evening ritual.

The all-important element of every children’s holiday, the swimming pool, also took on a novelty factor at Exmoor Gate Lodges, where it can be hired out for personal use for only £16. We had two hours’ exclusive use of the pool, not to mention the steam room or sauna, and played our version of pool volleyball for most of it, much to Joe and Nina’s delight, before returning to our lodge for a relaxing barbecue on the terrace. 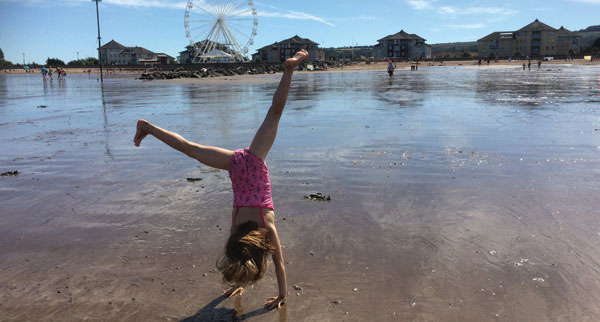 There are so many places to visit in Exmoor, holidaymakers are spoilt for choice.

On our lazier days we opted for a steam train ride on the West Somerset Railway from Bishops Lydeard to Minehead to spend a day on the beach, and have a pub lunch in Dunster.

Minehead’s vast, safe black-sand beach, which I last visited at the age of three, was ideal for young children to enjoy a paddle, kick-about or perfect a cartwheel. The steam ride both enthralled and delighted our two.

Dunster boasts a castle, tea house and gift shop at every turn, and a museum and doll collection that both impressed and intrigued Joe and Nina. 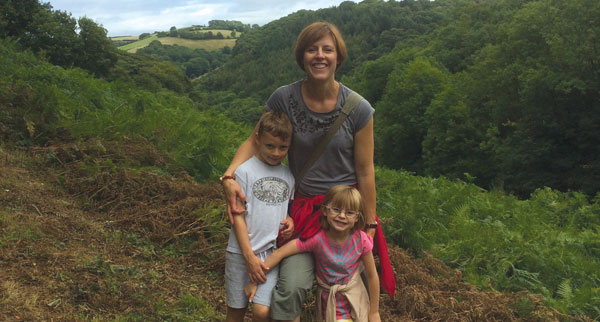 For hubbie Nick, a trip to Watchet, where he started his career on local paper the West Somerset Free Press, was a worthwhile trip down memory lane. Watchet has a small cluster of shops and cafes, a museum and a pretty harbour to stroll along for an hour or two.

But for all of us, the vast expanse of moorland, with its famous Exmoor ponies, purple hues and magnificent views, was the enduring memory of our family summer holiday. And it can be summed up in just one word: magical.

Kids gone wild: Nature Rockz activities are available at all 36 of Haven’s UK parks, letting kids forage in rock pools, help with conservation or pick up a few survival skills.

A walk in the park: Bodelwyddan Castle, a Warner Leisure Hotel in north Wales, has added new walking breaks, featuring two walks with packed lunches, from £239 for three nights on a Simply Dine package.

Mountain retreat: Explore Snowdonia’s foothills at Haven’s Hafan y Mor, where kids can get a view of the Llyn Peninsula on the park’s high wires and zip lines, explore the gardens or try out the boating lake. From £229 for a three-night family break.

We stayed in a two-bedroom lodge, which sleeps five people, at Exmoor Gate Lodges in Somerset, a 10-minute drive from Exmoor National Park. Despite its location near a relatively busy road, there was no traffic noise, with all lodges double-glazed and set into the slope.

The main bedroom, with a double bed, was on the ground floor. Upstairs was a twin-bedded room, with another bed on an open landing area above the lounge.

This set-up worked well for us, but for families with very young children who tend to wander out of bed at nighttime or need lots of attention, parents may find themselves making use of the upstairs landing bed.

Our bathroom had a shower rather than a bath, which again was no issue for us (in part thanks to the hot tub), but worth flagging up to families with little ones.

We needed a supply of pound coins to feed the electricity meter, although the cost was less than a tenner for the week and we had no surprise blackouts!

There is free Wi-Fi in the lodges, and a well-equipped kitchen, including a washer-dryer and microwave. Towels and bed linen were all provided.

The lodge was comfortable, clean and did exactly what it said on the tin.

Book it: A three-night short break for up to five people at Exmoor Gate Lodges in the summer holidays costs from £689. Seven nights costs from £1,079.
hoseasons.co.uk