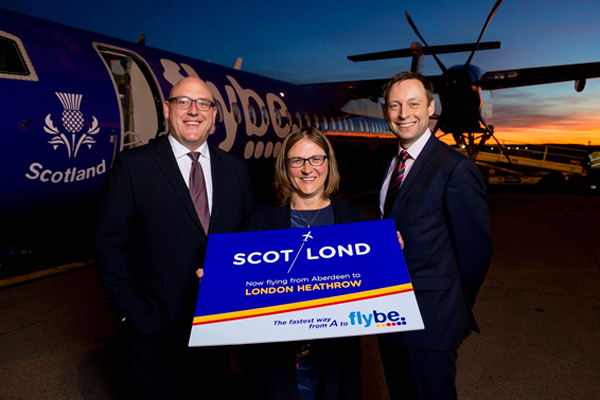 Flybe has touched down at Heathrow to become the first regional airline to start operating from the London hub since 2013.

The carrier has gained entry to the capacity squeezed airport after a European Commission ruling on redeploying slots from British Airways following its merger with Aer Lingus.

Flybe’s entry has also been aided by Heathrow reducing domestic passenger charges by £10 in January.

Flybe will be hoping to succeed on the domestic feeder routes to and from Heathrow where Virgin Atlantic’s short-lived offshoot Virgin Little Red failed.

The regional carrier will be using small 78-seat Bombardier Q400 turboprop aircraft to compete with BA’s Airbus A320 jet services to Edinburgh and Aberdeen.

Flybe is serving Edinburgh with up to four flights a day and three a day to Aberdeen from Terminal 2: The Queen’s Terminal.

The flights at Terminal 2 connect with Star Alliance airlines’ network of 44 global destinations as well as transfers to flights with Flybe codeshare partners Emirates, Virgin Atlantic, Etihad Airways and Singapore Airlines at Terminal 3.

Heathrow operations director, Derek Provan, said: “Earlier this year, Heathrow reduced domestic passenger charges by £10 and it’s great to see the benefits of that coming through with Flybe’s new services to Aberdeen and Edinburgh boosting choice for our passengers.

“With Flybe operating from the award-winning Terminal 2, Scottish passengers and businesses now have direct access from Heathrow to over 180 global destinations including some of the fastest growing export markets around the world.”

Fybe chief executive, Christine Ourmieres-Widener, said: “Passengers can, for example, fly onwards with Virgin Atlantic to Los Angeles or New York, or fly east with Singapore Airlines – all on one ticket from Edinburgh or Aberdeen.

“Early bookings show this is an increasingly important part of the booking profile for these two new routes and we look forward to adding even more codeshare partners shortly.”

She claimed that the new flights “offer the best value for money” for those flying between Scotland and Heathrow.

Scottish transport minister, Humza Yousaf said: “These flights will bring real benefits to business and leisure passengers by returning competition to the routes, as well as boosting Scotland’s connectivity by offering more options to access the huge range of onward destinations from Heathrow.”