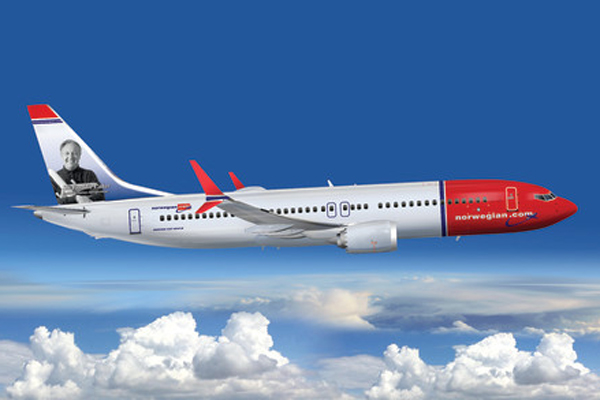 Transatlantic low-fare aviation pioneer Sir Freddie Laker is to be recognised by budget carrier Norwegian 40 years after the creation of Laker Airways Skytrain.

The Laker Airways founder, who offered Gatwick to New York JFK fares of £59 in 1977, will become its latest British ‘tail fin hero’.

An image of Sir Freddie will be the first figure to appear on the airline’s new Boeing 737MAX aircraft being introduced this summer as part of its low-cost long-haul expansion between Europe and the US.

He will become Norwegian’s third British hero, following the author Roald Dahl and pioneering pilot Amy Johnson, to appear on the tailfins of Norwegian aircraft.

Sir Freddie’s legacy has been a clear inspiration to Norwegian’s low-cost long-haul growth which has now expanded to more than 50 transatlantic routes.

Norwegian chief executive Bjorn Kjos said: “Norwegian continue to see huge growth in our transatlantic flights but we are standing on the shoulders of giants like Sir Freddie Laker who first pioneered the idea that travel should be affordable for all.

“Millions of passengers around the world owe a huge debt to Laker who first opened the door to the affordable fares we all now enjoy.

“We are honoured to have Sir Freddie as one of our tail fin heroes and it is especially fitting that he will be the first face on our brand new MAX aircraft serving new transatlantic routes between the UK, Europe and the US this summer.”

Freddie Laker Jr, a leading entrepreneur in the tech sector, said: “Norwegian is dedicated to bringing high quality and affordable air travel to everyday people – I have even heard Norwegian’s CEO, Bjorn, described as the ‘Freddie of the Fjords’.

“The spirit of Laker Skytrain carries on with Norwegian and I know my father would be honoured by this recognition.”