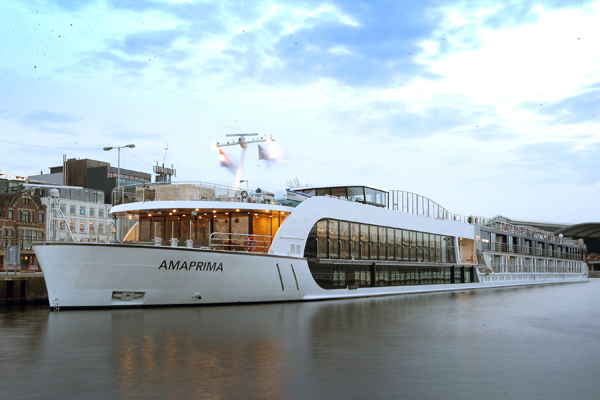 AmaWaterways hosted 105 agents on its first mega-fam for the UK trade in partnership with APT on new vessel AmaPrima last week. Natasha Salmon reports from Amsterdam

Just six months after opening its first office in the UK, AmaWaterways stepped up its commitment to the trade by hosting 105 agents and operators on its inaugural mega-fam.

Speaking on board AmaPrima during a three-day round-trip sailing from Amsterdam, managing director Stuart Perl said the line was on track to surpass its 2017 sales target and was set to have added five roles to its team by  next month.

He said the fam was an opportunity not only to showcase the line’s different offerings but also to demonstrate its “special partnership” with APT.
Perl said: “Our first step to showing our huge commitment to the UK trade was when we opened our office [in Guildford] last year.

“We wanted to benefit from the fantastic growth in the UK river cruise market and, after making that investment, we followed through with this event and want to continue to do as much as we  can with our trade partners.”

The 105 agents and operators departed Amsterdam and experienced cycling and walking excursions in Hoorn.

“We’re in a lucky situation in that the UK office can build its presence from the [company’s] solid foundation,” Perl said.

“For 2017 our target was to sell the same as 2016, but the numbers suggest we will exceed that target by an exceptional amount, which is great news, and is testament to the great team I have working for me and the strength and power of the AmaWaterways product.

“These are quite aggressive growth targets, but we have everything in our favour and everything planned. We are here in the UK and here to stay.”

The river cruise operator had been represented in the UK by Fred Olsen Travel since 2008 before going it alone.

It was established in 2002 by river cruise veteran Rudi Schreiner and co-owner Kristin Karst.

APT has chartered AmaWaterways’ ships since 2006 for its luxury cruises and has seen about 500 agents sign up to its online training for river cruising.

The companies held workshops to showcase their co-operation, as well as highlight their differences: APT charters the ships as part of packaged land and river tours, while AmaWaterways offers sailings with shore excursions.

APT sales director Angela Waite said: “We are now in a really strong and positive place with river cruise and we will continue to work with travel partners to grow our offering.”

More ocean customers are migrating to river as agents experience river cruise for the first time.

Travel partners who attended the AmaWaterways and APT mega-fam said they had seen an increase in river cruise customers, as well as people shifting from ocean to river.

Connell Green, supplier relations executive at World Travel Holdings, said: “I have seen a lot of customers migrate to river from ocean and can now see why. The appeal of river is beginning to broaden; it brings you closer to the destination.”

Great Rail Journeys cruise product manager Andy Hawke said he had been “blown away” by the service on the ship.

“With less passengers the interaction with the staff is much more personal and they have been outstanding. It is marketed at five-star and that is how we would sell it.”

Jane Morgan of The Travel Academy said the ship was more spacious than she had expected.