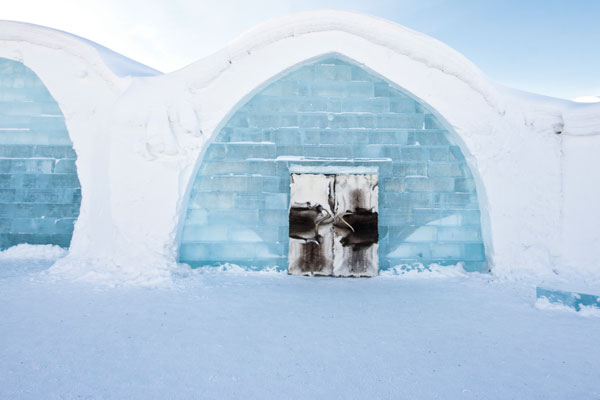 Drifting off into a deep and pleasant sleep, I almost forget where I am – until I feel a sudden chill on my nose as my face pops out of the Arctic sleeping bag, and I’m swiftly reminded that I’m essentially sleeping in a fridge.

Welcome to the Icehotel365, where inside temperatures rest at a cosy -5C and the suites, each individually designed into works of art, are made entirely of ice.

Mine consists of a reindeer skin-covered ice bed, raised high on a block of ice steps. Outside there’s an all-white ice corridor, which leads to the ice gallery, where a glistening, amber-coloured chandelier (made of ice, obviously) hangs from the ceiling. Ice sculptures decorate ice tables, which border the ice bar, where swathes of blue light bounce off ice glasses. Starting to notice a theme?

And, as I discovered on a trip here with regional specialist Simply Sweden, it’s as novel, exciting and strange as it sounds. 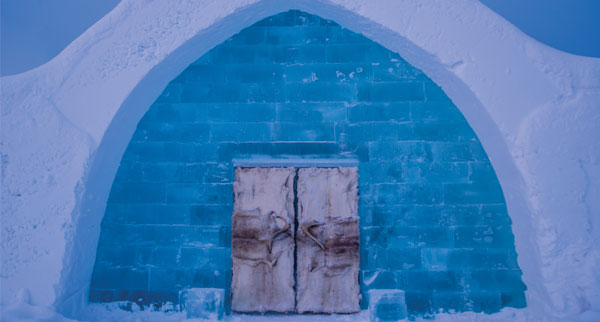 Creative director Arne Bergh and his team set about creating the 365 with a rather unusual idea in mind: for it to be open year-round, artificially cooled in summer using energy produced from solar panels. As with the original Icehotel, blocks would be harvested from the River Torne each March, and suites would be redesigned on a yearly basis.

Set next to the original Icehotel in Jukkasjärvi – a small village near Kiruna, 125 miles north of the Arctic Circle – it shares the same reception, clothing area and restaurant as its sibling, all of which are (thankfully) warm. There are also a number of ordinary, pleasingly insulated rooms, where guests tend to stay for two or three nights in addition to a novelty night in the cold ‘art suite’. 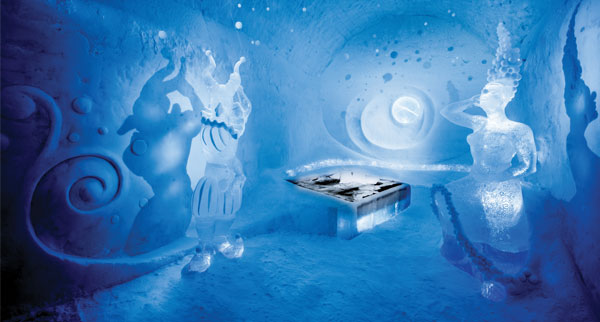 Bergh has been working at the Icehotel for nearly 20 years, drawn in by the transience of ice and ‘snice’. “What I like about ice is that it’s ephemeral, not lasting,” he tells me.

For the newest version, he and his team selected designs from more than 100 artists on the basis of their originality – and it shows, with everything from mermaids to minibars filling the interiors.

In one room – aptly named ‘don’t get lost’ – guests have to work their way through a labyrinth to reach the bed, while another lines up bright blue walls covered in elegant bird carvings with intricately designed ice benches you can actually sit on. But it was the ‘sugar suite’ that I found the most endearing, with its hot-pink, illuminated ice bed hovering in the middle of the room like a UFO (an ideal one for the kids). 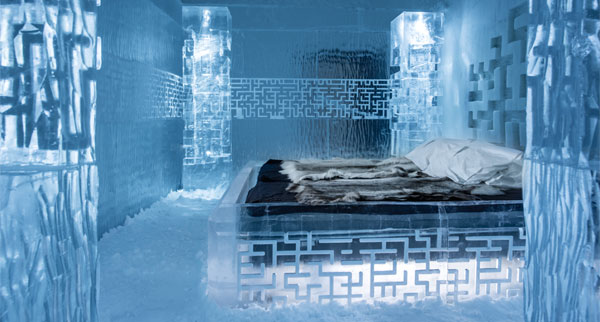 Just in case all that isn’t quite enough on the ice front, there’s a five-course tasting menu where the likes of roe on the rocks and slow-cooked elk are served on thick blocks of it. My favourite was the arctic char, served with a fairy dust-like dill powder so fine and delicate it melted away as soon as it touched my tongue.

Beyond the obvious novelty of staying in a building made from frozen water, though, there’s the idyllic setting which comes with it. Just outside my warm room, frosted trees sprinkled with layers of snow bordered idyllic-looking chalets, and the nearby village was a shrine to all things Swedish: brightly coloured houses, a dark-red church topped with a thick layer of white and one empty, snow-covered road made the scene so Christmas card-worthy it barely felt real. 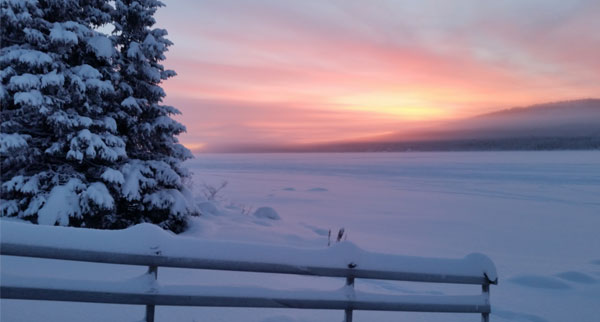 It looked even more magical mid-morning, when I wandered along under a sky of pinkish lilac – a sort of semi-dawn, semi-dusk light that later became all the more dramatic when a blast of fiery orange and yellow took over (because, in true polar night style, 11am feels like sunset and 3pm feels like bedtime).

There are plenty of other, more adventurous, ways of experiencing all this, of course: cross-country skiing, horse riding, reindeer sledding and snowmobiling under the northern lights are all available in the area and bookable through the hotel.

We tried ice sculpting, a ‘wilderness survival workshop’ and a 10-step sauna ritual, made complete with an ice plunge in the nearby river – ‘invigorating’ doesn’t do justice to the experience, which lasts two and a half hours, for up to six people. 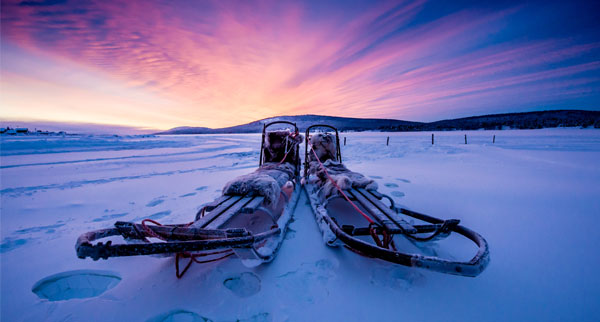 The survival experience meanwhile saw us drifting along the frozen river on a snowmobile sled, an endless sheet of white to our left and a dark green, imposing pine forest to our right.

Hardy local guide Robert Lundgren taught us how to make a fire in the snow using wood from the trees, flint and a knife. But it was the setting that really stuck in my mind – the silence, the smell of pine, the crackling of snow underfoot as I set off, Indiana Jones-style, in search of wood. 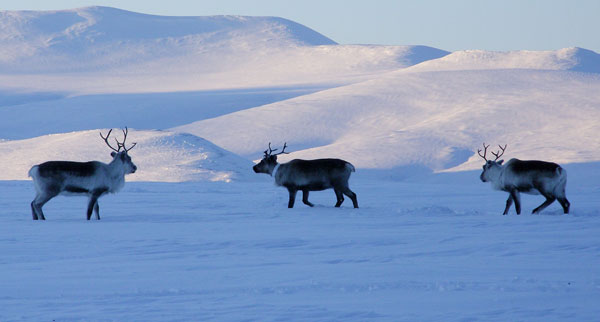 Clients don’t even have to do a tour to have a good time here, though, and for those more interested in getting a sense of the local culture than jumping in icy rivers and sculpting their own masterpieces, suggest a visit to the Sami reindeer farm in the local village.

Families can feed the animals, and there’s an outdoor museum showing how the nomadic Sami people – the biggest remaining indigenous community in Europe, whose lives are traditionally centred on reindeer herding – once lived. 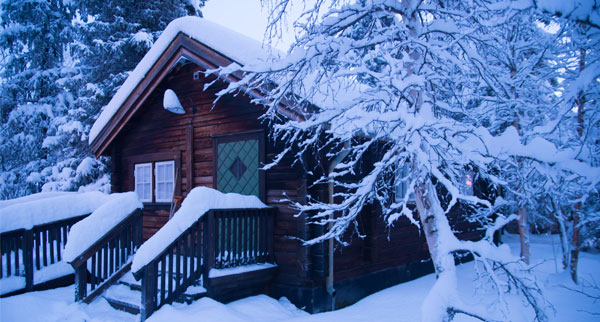 We got a glimpse into exactly that the following day, when we waved goodbye to the Icehotel and headed west to Enok’s Wilderness Cabins – a small collection of luxury cabins owned by Sami father and son Andreas and Nils Sarri, who opened them last summer.

Set out in the sticks at the foot of Mount Kebnekaise and on the shores of Lake Láddjujávri, the four cabins – the only luxury lodges in the area – are an excellent suggestion for clients wanting to get completely off the beaten path.

Getting there involved a car transfer with Andreas and Nils to the nearest village, Nikkaluokta, followed by a two-hour snowmobile ride through the wilderness.

But the trip was well worth the effort – it turned out to be one of the most surreal and genuinely beautiful journeys I’ve experienced, with frozen pine trees lining the tracks, half-camouflaged moose dashing through the forest and mountains surrounding us at every turn. Anyone seeking an adrenaline rush can even opt to drive the snowmobiles themselves (minimum age 18). 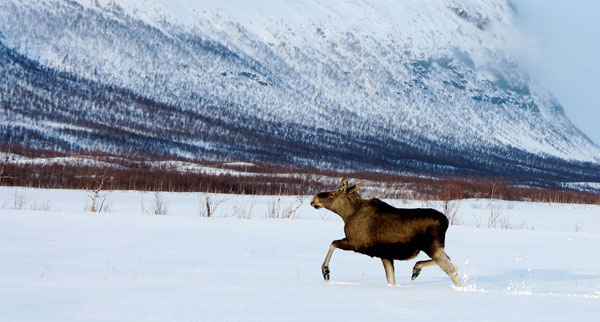 Other activities available from the cabins include a moose safari by minibus and a day tour including ice fishing. I can’t say I caught anything on the latter, but it was the sense of being there – black-and-white chequered mountains all around, dusky sky overhead, a blue waterfall frozen mid-flow in the distance – that really moved me.

It was the previous night that topped it all, though. Awakened from the throes of a deep sleep, I heard a knock on the door. It was Andreas, enthusiastically pointing at the sky and shouting “northern lights!”. 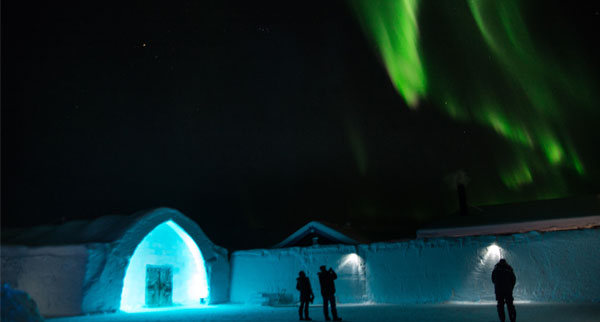 And there it was; a full display of pale-green, ethereal shapes dancing around above our heads, changing shape with every second, swirling around, fading here and there, before disappearing half an hour later. That was the magic of it; like the ice, it was the transience of the whole thing that had me so enchanted.

Book it: Simply Sweden’s three-night Icehotel – Luxury Snowmobile trip combines a stay at the Icehotel with a trip to Enok’s Wilderness Cabins. Prices start at £1,440 based on two sharing. The trip includes flights and transfers, one night in an art suite, a night in a warm room (both at the Icehotel on a B&B basis), and a night at the wilderness cabins (half-board), plus activities at the wilderness camp and warm outer clothing.
simplysweden.co.uk

“Clients are seeking personal experiences and authenticity. Our huge knowledge and network of local partners mean we can take clients deeper into the culture and tailor-make trips. Winter bookings for Swedish Lapland are up 100% on last year.”