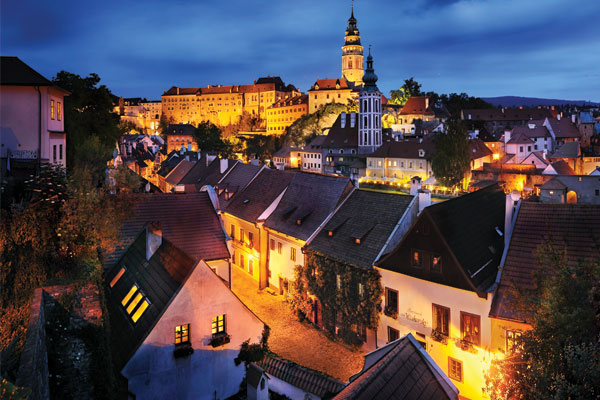 Venture beyond Prague to check out what the Czech Republic has going for it, says David Whitley.

Like Budapest or Amsterdam, there’s a traveller’s tendency to see Prague as a sole destination, rather than as merely one offering among many in the country. As such, the Czech Republic tends to get relegated to the status of weekend-break destination.

But that’s not exactly giving the country a fair crack of the whip. Prague may be superb: a city of several architectural masterclasses, cheap high-quality beer, the world’s biggest castle and a big menu of little oddities.

But venture out of it, and there’s an extraordinary, multifaceted, and often quirky country on offer. And what you get depends on which direction you go in. 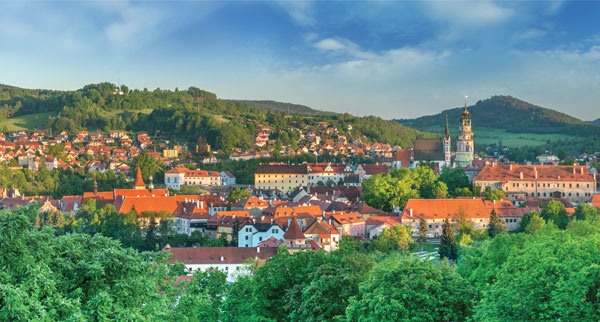 Go south and you’ll find something truly dreamy. Cesky Krumlov is no longer the great secret it once was – it has been on the Unesco World Heritage list for 25 years now – but it is still something special. A smattering of delicately painted renaissance buildings are grouped around a near-perfect loop in the Vltava River, while the extravagant castle looks down from the clifftops above. On a summer’s afternoon, you’d be hard-pushed to find anywhere more satisfying to sit than on a riverside terrace with a beer in hand.

But if you simply must fill the schedule with things to do, then the castle should be the priority stop. It’s free to roam around the series of courtyards, looking out for alchemist symbols painted on the walls and getting the classic city view from the viaduct-esque terrace. But there are several (slightly confusing) ticket options: some allow you into the museum, which hosts period rooms, an armoury and a mint; others allow you up the sumptuously painted tower.

The must-see, however, is the baroque theatre – one of only two of its kind still in existence. 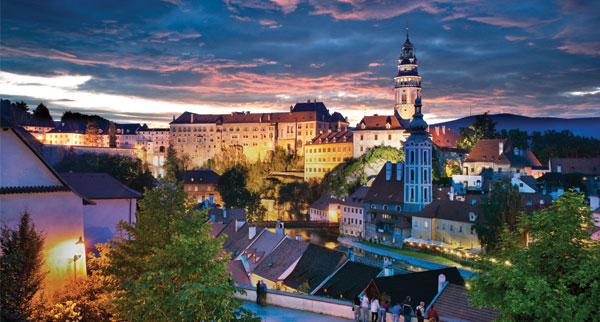 Other attractions – such as the monasteries that have recently been refurbished to allow visitors, and timewarp photography studio Foroatelier Seidel – are perfectly enjoyable if not exactly essential. But Cesky Krumlov isn’t the sort of place where you need a big list of boxes to tick – you’re far better off mooching, then expanding the waistline with massive pork knuckle and dumpling dinners.

Outside the winter months, the best way of exploring is by boat. Several agencies hire out canoes or rafts, then drive you upstream to the start point. From there, you can merrily float downstream in the sunshine back into town. Malecek offers prices from £5 per person for just over a mile on a large raft to £22 for just over 20 miles in a canoe.
ckvltava.cz 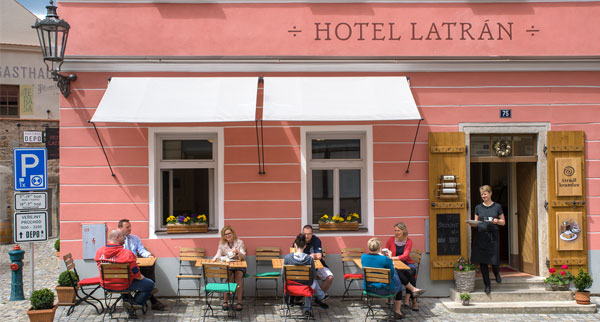 Go west, and you’ll end up in Karlovy Vary, and it’s not somewhere you can forget, as it is seriously unusual. That’s largely because it’s one of the world’s premier spa towns, but if you’re thinking of people splashing around in big, thermal pools, think again. Karlovy Vary takes spa-ing very seriously – it’s very much a health resort rather than a pleasure escape. 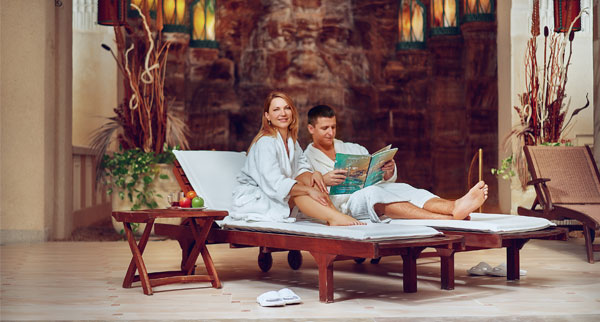 This makes everything very hotel-focused. There are scores of hotels in town, many of which have huge spa complexes, and bafflingly long treatment lists covering things mere mortals didn’t know existed. Some guests are in there for three weeks or more, taking their wellness retreat very seriously indeed.

Outside this, however, the main hot springs line up alongside the Teplá river, and are sheltered and shown off by four colonnades that have radically different looks. The biggest is a 1970s communist bulkmonster, where a geyser regularly shoots outside. The other three are much prettier – one’s a classical throwback stone effort, another is a dainty wooden affair and the fourth is made of carefully bent, twisted and patterned iron.

For those staying in one of the smaller hotels, or day-tripping in from Prague, there’s the Castle Spa, which is open to all and offers a full range of treatments and a decent pool.
zamecke-lazne.com 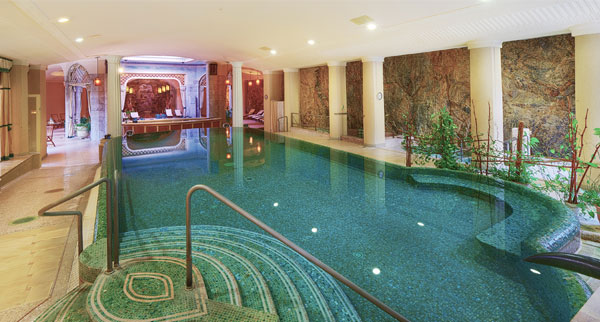 Stepping out of the spa bubble, the city is blessed with a lot of grand turn-of-the-century architecture, plus a couple of local companies made good.

One such success story comes from Jan Becher, which produces Becherovka, a herbal liqueur sold around the world. Tours of the Jan Becher Museum are followed by generous sampling sessions.

More gripping is the Moser factory, where hugely expensive, colourful and exquisitely engraved Bohemian crystal glasses and vases are produced. Guided tours costing about £58 head towards the furnace, where you can
watch expert glassblowers make the products by hand.
moser-glass.com 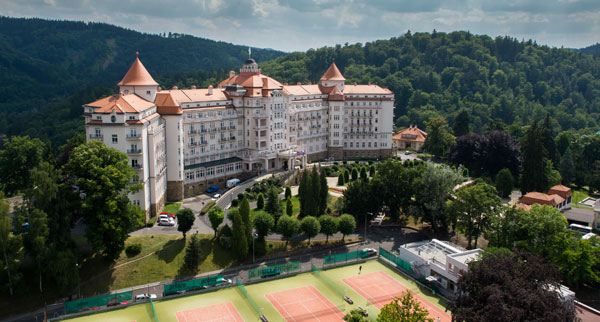 Stay: The Imperial is quintessentially Karlovy Vary. A mammoth hilltop edifice with a maze of treatment rooms and a sizeable pool, it plumps for deep reds and leaf patterns in the rooms, and manages to look timewarp-ish without being dated. Twin rooms from €150.
spa-hotel-imperial.cz

Go east, and you’ll hit the Czech Republic’s second-largest city. Brno, which has direct Wizz Air flights from Luton and Ryanair flights from Stansted, defies a few Czech stereotypes too. For a start, this is wine rather than beer country, and it’s as good a place as any to try the Moravian wines that rarely make it into UK shops.

Character-wise, it’s a perfectly pleasant city to hang out in, with some strong examples of modernist architecture. But amid its lack of fanfare is a series of highly distinctive attractions. 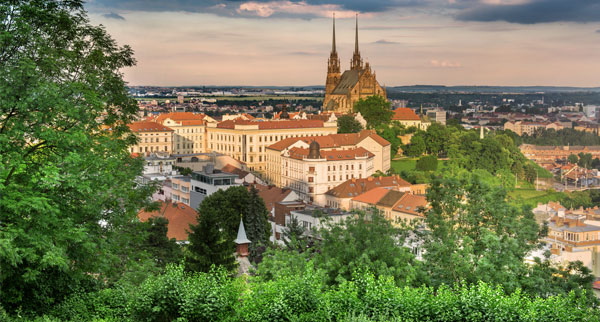 The most conventional of these is Spilberk Castle, which has plenty of temporary exhibitions inside and slightly dusty displays on the region’s history. It’s more fun when things get grim on the tour of the casemates – a system of tunnels that have previously been an ultra-bleak prison, a Nazi wartime HQ and an air-raid shelter. No punches are pulled with the displays of racks and solitary confinement cages that awaited prisoners in the past.

The Mendel Museum is fascinating for anyone with an interest in science. It’s inside the former abbey where Gregor Mendel did the experiments with peas that led to him establishing the basic principles of genetics and genetic inheritance. The old pea garden is still outside and the museum explains Mendel’s thinking in a clear, engaging way. 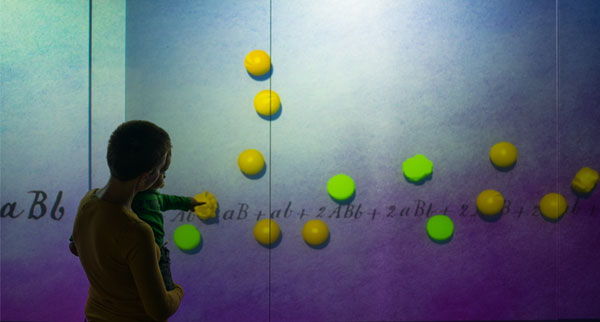 The Labyrinth under the Cabbage Market is the star among several odd underground attractions. Tours take visitors through a network of tunnels and cellars that have been carved out over the centuries and previously used as bars, food storage spaces and alchemists’ workshops.

If you still need to up the weird quotient a bit, there’s the Ossuary at St James Church. Here, thousands of human skulls and bones have been rearranged into eye-catching formations and set to ambient music. The subterranean hotchpotch was once the church’s cemetery, but the bones were dug up and shunted around a long time ago.

For architecture lovers, the must-see is Ludwig Mies van der Rohe’s early masterpiece, Villa Tugendhat. It’s a triumph of functional, holistic design, where windows drop into the floor, doors go all the way up to the ceiling and the vast open-plan living area lies on top of an even more vast network of machinery rooms and servants’ quarters. Tours book out weeks in advance, so best to book well ahead. 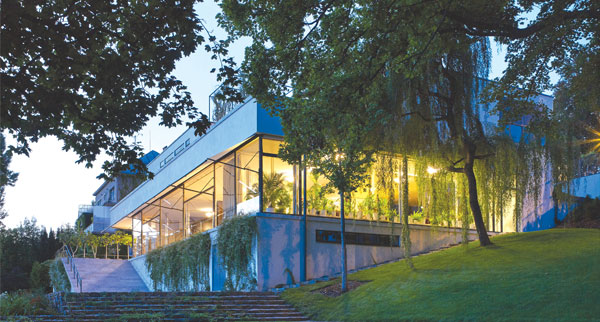 Stay: The large, modern Hotel International comes with a basement pool, big breakfasts and walls of photos of dignitaries and celebs who have stayed there in the past. Rooms are a little on the bland, utilitarian side, mind. Doubles cost from €137.
hotelinternational.cz