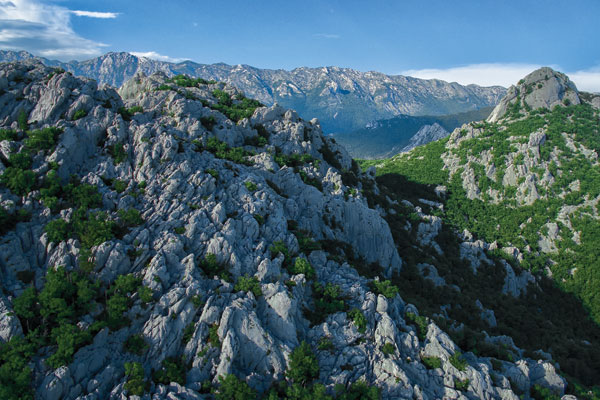 Get in tune with a quieter Croatia city break, says Mary Novakovich.

Think of Croatia’s Dalmatian coast and Dubrovnik and Split usually spring to mind. But suggest customers head further north along the coast to Zadar, which has an alluring mix of Roman and Venetian history, but doesn’t have the crowds of Croatia’s better-known ports.

Its old town, which sits on a peninsula overlooking the Zadar Channel, still has many of its Renaissance fortifications and gates surrounding marble streets and alleyways. Romanesque churches, cafe-filled squares and Roman ruins squeeze into a maze of narrow streets. But don’t be fooled into thinking it’s a living museum: Zadar is a university town with a vibrant nightlife.

Holidaymakers in need of relaxation can explore the heavily indented coast that harbours beaches backed by pine trees. Zadar faces an archipelago of enchanting islands, many of which are peaceful outposts served by ferries.

It’s also handy for active types who want to explore two of Croatia’s most beautiful national parks, Paklenica to the north and Krka to the south. 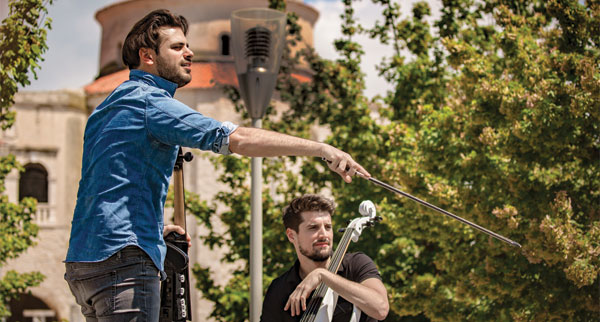 09.00: Start the morning on the wide seafront promenade Obala kralja Petra Krešimira IV, also known as the Riva. Catch the sea breeze before stopping for a coffee on Restaurant Zadar’s terrace. Listen out for the haunting sounds of the Sea Organ, an ingenious underwater art installation by Nikola Bašić. Beneath a series of marble steps are 35 pipes that chime with the water’s motion.

10.00: Some of Zadar’s most historic sights are within spitting distance of each other. Just up from the Riva is the Forum, where Roman ruins give an idea of what used to be Zadar’s original hub. Look out for the Pillar of Shame, which was used to shackle criminals in Venetian times. Dominating the square is the ninth-century St Donat’s Church, whose hulking Byzantine exterior was made of stones from the Forum. It’s no longer used as a church, but it makes a magical setting for classical concerts. Next door is the Archaeological Museum, which displays more than 100,000 items from prehistory to the Middle Ages.

11.30: As a prelude to lunch, browse the stalls at the old town’s open-air market. Look out for olive oil, honey, the Croatian version of prosciutto pršut and, in particular, paški sir, the salty sheep’s milk cheese from the nearby island of Pag. Pop into the fish market, which is built into the city walls, for an introduction to the seafood seen on the city’s restaurant menus.

13.00: Head around the corner from the market onto narrow Ulica Brne Karnarutića for a reasonably priced seafood lunch at Bife More. Try black cuttlefish risotto or the grilled langoustines.

14.30: Stroll through Croatia’s oldest public park, Queen Jelena Madijevka Park, which dates from 1829. Carry on through neighbouring Vladimir Nazor Park in the direction of the town beach, Kolovare. Although there are some sandy parts, it’s mainly pebbly – as are most beaches in the area. The beach has good facilities, including cafes, shaded areas and showers. 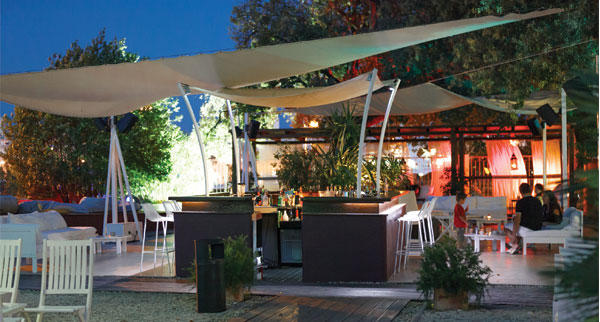 18.00: Time for an aperitif in Narodni Trg, one of Zadar’s busiest squares. A 16th-century watchtower looms over the square’s cafes, from which people watch the Croatian version of the Italian ‘passeggiata’ – an evening stroll. Grab a table at Cafe Lovre, which masks the entrance to the 11th-century Sveti Lovre church.

20.00: Enjoy the sea views from the terrace at Restoran Kornat at the peninsula’s northern tip. There’s a tempting selection of meat and seafood dishes, from scallops with gnocchi to steak with truffles. Afterwards, wander to the other side of the peninsula to catch the sunset, which Alfred Hitchcock declared was the best in the world. He wasn’t far off. Once dusk falls, another piece of public art comes into its own. Greeting to the Sun, also created by Bašić, is a large, flat blue glass circle by day but turns into something resembling Saturday Night Fever’s dancefloor by night.
restaurant-kornat.hr

22.00: For a chilled-out evening, relax with a cocktail on the open terrace at The Garden Lounge, which overlooks the sea.
thegarden.hr

10.00: One of Zadar’s unexpected delights is the Museum of Ancient Glass, housed in the 19th-century Cosmacendi Palace. It’s a fascinating collection of Roman and Dalmatian glass that offers glimpses into the region’s history. The museum also holds glass-blowing demonstrations.
mas-zadar.hr 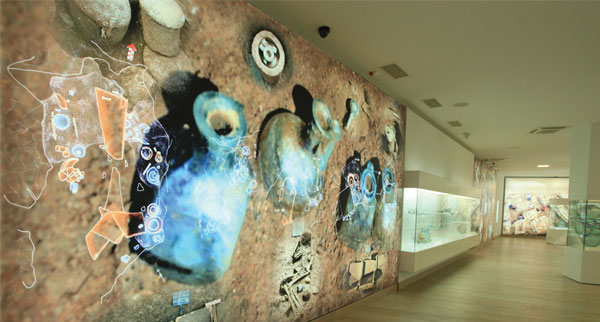 11.30: Head back towards the Forum, but stop for ice cream or cake at Danica on Široka ulica before visiting the 12th-century Cathedral of St Anastasia. It’s the largest in Dalmatia, with three portals and a 19th-century bell tower. Nearby, St Mary’s Church is worth a visit to see its three naves and its permanent exhibition of religious art.

13.00: Venice has its gondoliers, but Zadar has barkajoli, boatmen who have been rowing passengers across the Zadar Channel for 800 years. Take the boat across the harbour for a walk along Marina Borik and the little beaches tucked in here and there. Go around the headland to reach Borik Beach, one of the most popular in Zadar. It’s very geared towards families, with plenty of play areas for children. Things get quieter further along the coast, particularly at Diklo Beach. 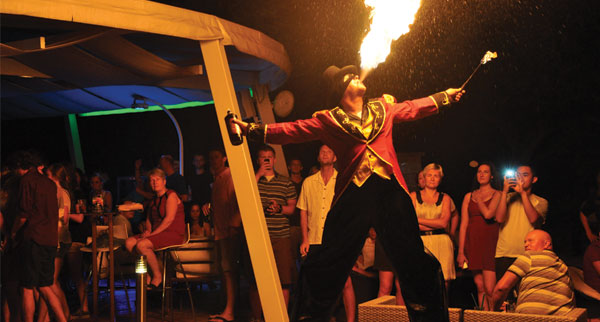 20.00: One of the most romantic spots for dinner is at Restoran Foša, in charming little Foša harbour by Vladimir Nazor Park. Start with an octopus salad before trying the grilled sea bream.
fosa.hr

22.00: From Foša it’s a five-minute walk to Ledana Lounge & Bar. Have a cocktail in the garden or join the party during the bar’s regular theme nights.

Many islands within the Zadar archipelago are easy to reach by ferry. A bridge connects Ugljan to Pašman, and both are covered in olive groves, pine forests and vineyards, criss-crossed with walking and cycling trails. The largest island is Dugi Otok, a place of sleepy fishing villages and tranquil coves. There’s even a sandy beach at Sakarun. The Kornati Islands are popular for yachting and boating holidays and the island of Pag, known for its outdoor festivals and parties, is an hour from Zadar. 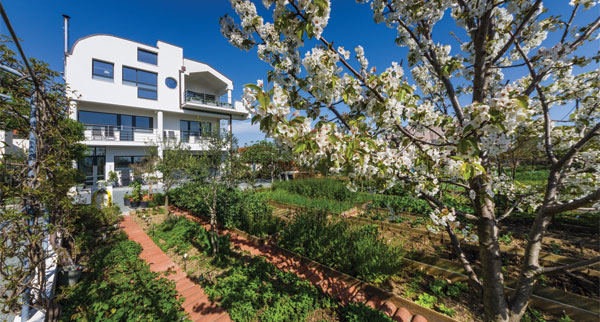 Save: There are only four double rooms at Kuca Bajlo, but this friendly B&B is a breath of fresh air. Set in an ultra-modern house south of the old town, the rooms have blue and white decor and balconies with sea views. Doubles from €65, including breakfast.
bajlo.com 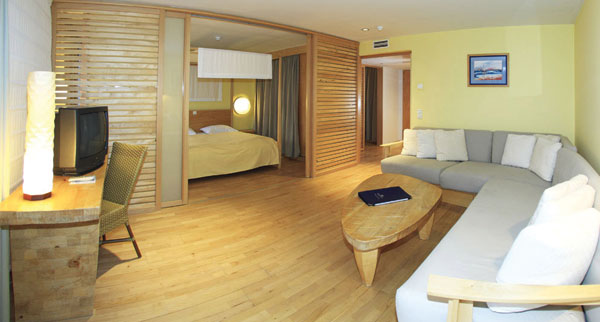 Spend: Falkensteiner Club Funimation Borik’s location on Borik Beach is unbeatable – not to mention the outdoor pools and mini water park. All-inclusive doubles start at €144. Jet2holidays offers a week’s all-inclusive from £674, including flights and transfers.
falkensteiner.com 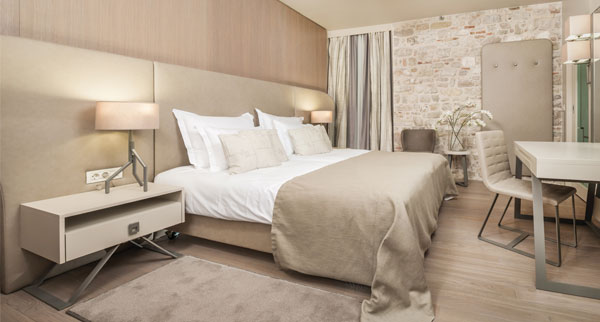 Splurge: Right in the heart of the old town is the four-star Art Hotel Kalelarga, a stylish boutique hotel with 10 rooms. Its tastefully designed rooms ooze serenity, and the main sights are practically on the doorstep. Doubles from €171 room only.
arthotel-kalelarga.com