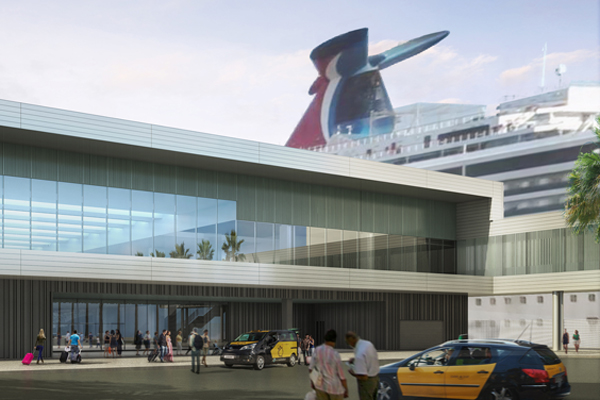 A new cruise terminal in Barcelona dedicated to Carnival Corporation brands is due to open next year.

The US cruise giant is spending more than €30 million on the building, designed to accommodate next-generation ships that will be fully operated by Liquefied Natural Gas.

Carnival Corporation will construct and operate the 12,500 square metre terminal, which paired with its existing facility at the Spanish port, represents its largest combined terminal investment in Europe.

The company expects to handle more than one million passengers at the Port of Barcelona once the second terminal becomes operational.

The new terminal, on the port’s Adossat wharf, will increase overall passenger capacity at the port, which is used by eight of the company’s 10 global cruises as both a destination and home port.

Construction on the project officially began in July 2016, and once complete it will enhance the embarkation and disembarkation process.

Global port and destination development senior vice president Giora Israel, said: “Our goal is to make travel for our guests as convenient, pleasant and easy as possible, and this new terminal is designed to meet and exceed guest expectations.

Sixte Cambra, president of the Port of Barcelona Port Authority, added: “Since the beginning of our relationship, Carnival Corporation has shown strong success in our port and city, and ten years after the opening of the first terminal, this has materialised in a new facility for their cruise brands.”