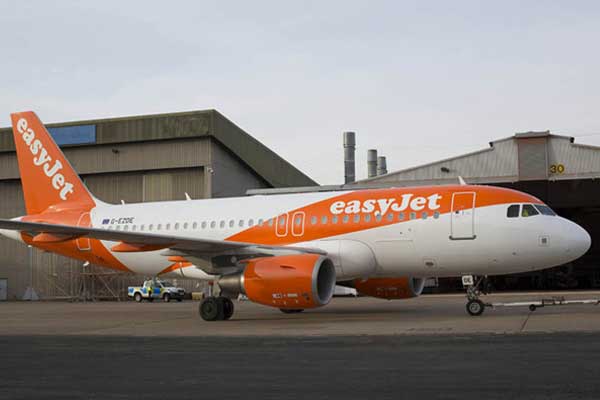 The late Easter and the impact of a slump in the value of sterling led to a tenfold increase in winter losses for budget airline easyJet.

The UK carrier reported a pre-tax half-year loss of £212 million, up from £21 million in the same period a year earlier.

The airline attributed the shift in Easter into April for £45 million of the downturn with £82 million coming from the impact of negative net currency.

Excluding these two items the headline loss before tax would have been around £85 million.

The total loss before tax after non-headline items was £236 million against £18 million a year earlier, the airline disclosed today.

The deteriorating financial performance came despite a 9% year-on-year rise in the number of passengers carried to 33.8 million in the six months to March 31 as capacity rose by 8.4%.

The headline cost per seat was flat at £38.54, reflecting strong cost control despite high levels of disruption to flights, with cancellations and delays increasing by 18% to 3,302, mainly due to severe weather at peak periods and air traffic control strikes.

“The challenges of working at Gatwick, where easyJet outperforms most of its direct competitors on on time performance, continue to have an impact on the rest of the network,” easyJet said.

This came against a backdrop of a 6% growth in the total European short-haul market in the six months to March 31.

However, easyJet pointed to rivals cutting growth plans or reducing capacity for the summer and the future, including Vueling, Norwegian, Air Berlin, Alitalia and Flybe.

Forward bookings are ahead of last year, at 77% for the third quarter and 55% for the half year.

The airline revealed that it remains on track to confirm a European Air Operator Certificate (AOC) by the summer and to secure its future operations within the European Union post-Brexit.

The airline is to purchase 30 Airbus A321neos under an existing agreement with the European manufacturer, with the first arriving in summer 2018.

This is a conversion of 30 existing orders for smaller A320neos will increase easyJet’s ability to grow in slot constrained airports and manage costs, according to the airline.

“We grew total revenue by 3.2% year on year while passenger numbers were up by 2.8 million.

“The first half loss is in line with market expectations and reflects the movement of Easter into the second half as well as currency effects which together had an estimated impact of circa £127 million on the bottom line.”

Looking forward, she added: “Our bookings for the summer are ahead of last year showing that demand to fly remains strong and reflects growing evidence that consumers are prioritising expenditure on flights and holidays above other non-essential items.

“Looking ahead, we are seeing an improving revenue per seat trend as well as the continued reduction of competitor capacity growth.

“Cost performance for the full year will continue to be strong. EasyJet is delivering on its strategy of purposeful investment in securing and building strong positions at Europe’s leading airports which is driving competitive advantage with sustainable returns.

“As a result our expectations for the full year are in line with current consensus market expectations.”

The first half financial results came as easyJet revealed plans to recruit up to 450 new pilots from next month. The largest recruitment drive in the airline’s history comes of top of a record 426 taken on last year.

Around 300 of the new roles will be for cadet pilots, who can earn up to £50,000 a year, with a particular focus on recruiting more female pilots. Experienced captains with EasyJet can command pay of up to £146,000 a year.

EasyJet currently employs more than 3,000 pilots who fly a fleet of 265 Airbus aircraft on over 870 routes in 31 countries.

New pilot positions are being created at all of its bases including the UK airports of Gatwick, Luton, Stansted, Southend, Bristol, Newcastle, Glasgow, Edinburgh, Belfast, Manchester and Liverpool.