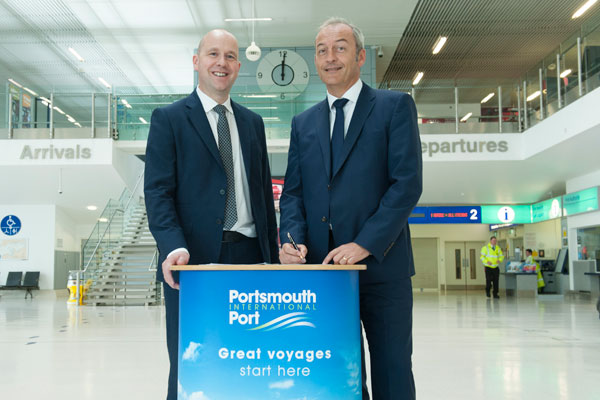 A 10-year commitment has been made by Brittany Ferries to continue using Portsmouth International Port post-Brexit.

The deal, which runs until 2027, will see the port work more closely with its biggest customer.

The port recently announced a £9 million investment in one of the berths used by the French ferry company.

An existing double decker linkspan, which acts as a drawbridge to load vehicles onto ferries, will be replaced after 25 years of service.

Brittany Ferries plans to build a new super ferry powered by Liquid Natural Gas (LNG), to be based at Portsmouth alongside cruise ferry Mont St Michel.

The company first used the council-owned port in 1976 as one of its earliest customers.

“In signing this agreement I am therefore pleased to be strengthening our ties and making a long-term commitment to a city that has served as our international hub for decades.

“Of course there may be challenges ahead. But we remain very positive about the future of trade and transport between the UK and France.”

Port director Mike Sellers said: “This deal really demonstrates a belief in each other’s ability to deliver, and highlights the crucial role Portsmouth International Port and Brittany Ferries play in trade to France and Spain.

“Whatever the details of the final Brexit deal are, we can now guarantee an ever stronger link for businesses and holidaymakers going to and from France and Spain.”