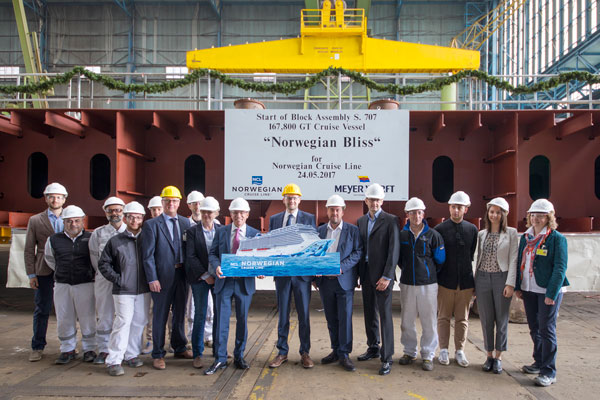 The keel laying of new Norwegian Cruise Line ship Norwegian Bliss has taken place at a shipyard in Germany.

Norwegian Bliss, the third in the line’s Breakaway Plus-class vessels, is being custom built for cruising in Alaska.

The 4,000-passenger ship is due for delivery in April 2018 from the Meyer Werft yard Papenburg.

During the ceremony, one of the keel blocks of the 167,800 gross ton vessel was lifted into the covered building hall, signifying a major milestone in the ship’s construction.

The ship will then re-position to run winter eastern Caribbean cruises from Miami from November 2018 with calls in St Thomas, Tortola and Nassau.

NCL president and chief executive, Andy Stuart, said: “We are overjoyed to celebrate the keel laying of Norwegian Bliss, our 16th ship and sure to be our most innovative ship to date.

“We have seen overwhelming anticipation and excitement from our guests and travel partners for Norwegian Bliss, from her awe-inspiring custom-designed spaces like her observation lounges to her elegant suites in The Haven by Norwegian, and we are all thrilled to see this magnificent ship begin to come to life with the craftsmanship, precision and cutting edge technology that Meyer Werft consistently delivers.”