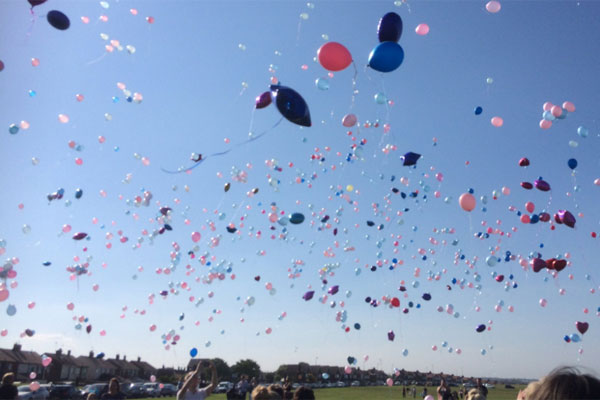 A fundraising appeal to help the families of Manchester terror attack victims Chloe Rutherford and Liam Curry has raised more than £1,000 in four days.

As tributes were paid to Chloe and Liam, Westoe Travel let off a sea of pink and blue balloons in their memory

Travel agent apprentice Chloe, 17, and her boyfriend Liam, 19, were among the 22 victims of last week’s suicide bomb after an Ariana Grande concert at Manchester Arena.

The attacker, Salman Abedi, blew himself up in the foyer outside the arena with a home-made bomb.

Teenager Chloe was an apprentice at Westoe Travel in South Shields, and was due to start full-time this month.

After she and Liam were named among the victims of the atrocity, Manchester-based travel agent Ken Garrity Travel, joined Westoe Travel to set up a fundraising page.

Tributes have been paid to Chloe since the attack, and she was described as “always smiling” by colleagues.

You can Donate to Chloe and Liam’s Just Giving page here.