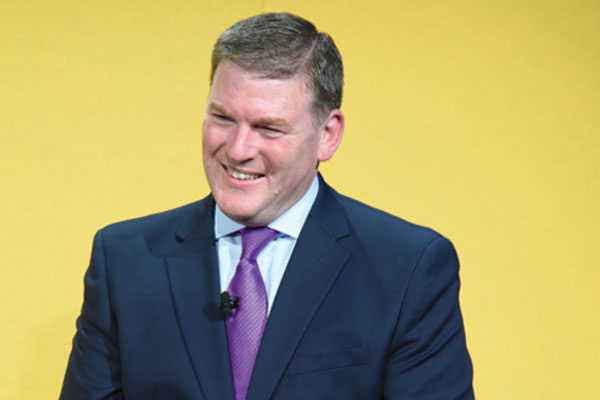 Royal Caribbean Cruises’ Gavin Smith admitted cruise lines could do better at communicating with customers and rely on agents to push their message.

The keynote speaker told Clia Conference delegates that while the cruise industry was “relentless” at adapting to changes in currency or destination, it still largely left it to the trade to steer customers to the right cruise.

Smith, senior vice-president international for Royal Caribbean Cruises, said: “The high street and agent model is very fondly regarded because it is in that face-to-face environment that the education is provided by the retailer.

“Despite our rhetoric of what we do, the communication side we don’t do terribly well. After [customers] go home, we’re less good and know less about them.
“So we really will continue to be dependent on our colleagues – agents – in the distribution system.”

In a separate speech, the president of Carnival Cruise Line hailed the growing number of women gaining senior roles in the industry. Christine Duffy said “diversity” was on the up with more women running cruise lines.

Duffy became the first female president of her cruise line in 2015. Addressing delegates at last week’s Clia Conference in Southampton, she spoke about  her journey from travel agent to boss of the world’s biggest cruise operator.

“I was the first female president of CCL, which was exciting,” she said. “Before me, Ann Sherry became chief executive for Carnival in Australia, then we had Jan Schwartz as president of Princess. Lisa Lutoff-Perlo is president at Celebrity and Edie Rodriguez is president of Crystal.

“Today we are seeing more and more women running cruise lines and that does make a lot of sense to us because we know women are the primary decision-makers when it comes to choosing a holiday.

“At Carnival we really believe it is important that we reflect who our guests are.
“Clearly, diversity matters, including diversity of thinking, not only in gender. We have such a bright future ahead as an industry.”

Duffy said it was also important for agents to know how cruise lines are adapting in terms of the environment. Carnival and Royal Caribbean will use liquefied natural gas-powered ships from 2020.

“Agents need to know how the cruise industry is intending to innovate in new technologies including using liquefied natural gas,” Duffy said.

“People ask these sorts of questions more than ever. They are concerned about the environment, so we need to make sure we tell agents enough so that they can tell our customers.”

Clia president Cindy D’Aoust also touched on the opportunities open to agents in growing cruise sales in the UK while the sector continued to make up only 2% of the overall holiday market.

“Cruise has grown by 62% in 10 years and will continue to grow with the support of our agents,” she said.

“Agents are key to simplifying cruise for new customers and in matching the right brand to the right person.

“Cruise also gives agents the chance to invest in themselves. With 32,000 training modules completed on the Clia agent site last year, this is the best time  to educate yourself.”

New figures released by Clia show the UK cruise market slipped to fourth position in the global passenger rankings for 2016.

Although UK ocean passenger numbers rose to 1.89 million from 1.79 million, China grew to 2.1 million, taking it into second place, while the German market dropped to third with 2.02 million customers. All three remained far behind the US with 11.52 million.