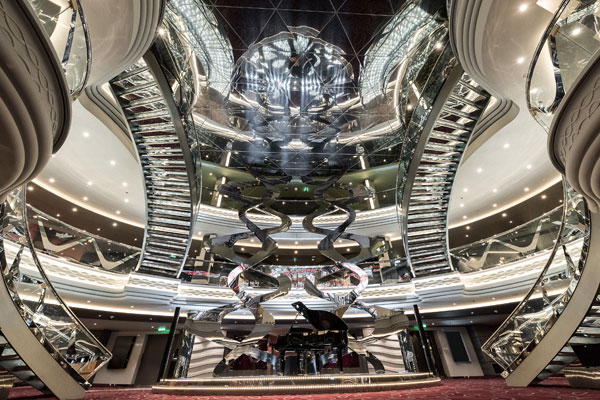 MSC Cruises has launched its newest ship Meraviglia, the line’s new flagship and now the biggest in its fleet with capacity for 5,714-guests.

Pierfrancesco Vago, MSC’s executive chairman said: “We have an ambitious vision for the future and MSC Meraviglia marks the start of the second phase of growth for our company.

“The new ships that we are building – between 2017 and 2020 alone, we will receive six new ships — are purpose-built, featuring innovation in both product and design, as well as the very latest-cutting edge marine and consumer-facing technology to create unforgettable holiday experiences at sea for guests of all ages.

“MSC Meraviglia is the first to make this vision come to life, as it sets a new standard for cruise ships as a destination in itself.”

The new ship, the name of which means ‘wonder’ will feature an exclusive Cirque du Soleil show and cast running two performances six nights a week plus an 80 metre LED ‘sky screen’ in the ship’s promenade.

On May 31, ahead of the christening, the line also announced news of its next four ‘World Class’ ships which will be the largest in the world with a passenger capacity of 6,850.

The event was attended by French president Emmanuel Macron and minister of the economy Bruno Le Maire.

Meraviglia will commence its summer itinerary out of Genoa from June 11 offering six embarkation ports in the western Mediterranean, including Marseille and Barcelona.