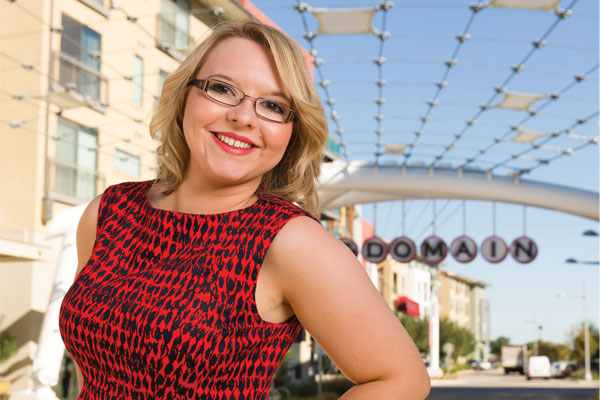 The lady in red tells Ben Ireland about trying new colours and forgetting her credit card for a Texan shopping spree.

Q. How did it feel to be given the star treatment?
A. It was amazing, right from the start, in the lounge at Heathrow. It had everything you could have wanted. You could even get ‘pick and mix’, so we got bags full of sweets for the flight.

Q. You landed in Dallas and went straight on to Fort Worth to stay at the Sheraton. How was it?
A. The room was massive, I had two enormous double beds. Outside the hotel was a huge fountain, which was the main feature. It was stunning to see that on arrival, very glamorous. Everything in America is on a bigger scale.

Q. Then you went to the rodeo, what was that like?
A. It’s so normal to the Texans, it’s like us going to the cinema. They take their kids and eat popcorn in the stands. I’m an animal lover, so some parts of it were difficult to watch, like when they lassoed a calf, but it was nice to see their culture.

Q. Have your experiences helped you sell more American holidays?
A. We don’t get a lot of people asking about America. Before the trip, I was a bit dubious about how much there was to do, but there were lots of things around Fort Worth and Austin. It has made me more confident in selling it. Before I would have relied on an operator.

Q. Tell us about the Simon shopping malls you visited, The Domain and the Grand Prairie Premium Outlets.
A. The malls were incredible and huge, but I forgot my credit card! At the Grand Prairie in Fort Worth, I spotted the Fox shop, which my boyfriend loves. So I bought him stuff from there. There was a massive Gap, so I got my niece and nephew some nice clothes. Every shop has massive discounts, and Michael Kors had a 50% sale. I got a clutch bag, but I definitely would have got a big handbag if I’d not left my credit card at the hotel.

Q. How about your outfit?
A. It was something I would never have picked. I had two stipulations; I wanted a skater-style dress and I don’t wear red. So Caroline from Simon Shopping Destinations was doing her best to get me in red. I ended up in a red dress with red lipstick. It was out of my comfort zone but I loved it and I have bought another red dress since I’ve been home.

Q. And the photoshoot?
A. It was on a bandstand in the middle of The Domain shopping centre in Austin. I was nervous at first, because there were so many people walking past, but the photographer helped me settle into it. It’s like being a movie star, as you’re the centre of attention in this really busy place. With the colour of the dress and the sun shining it looked really summery. A lot of people said I looked lovely, which was nice. I even smiled with my teeth, which I don’t usually do. I bet you end up using that picture!

Q. Aside from the shoot, how was Austin?
A. Fort Worth was my favourite place because it was really calm and peaceful and pleasant to walk around, but Austin was really good too. It was great to see two contrasting cities. It’s a really clean, modern city and I loved the diversity. One of the highlights was when we went to the outskirts to a food trailer park. It was really quirky. We went into a pizza place and tried a local beer called Lonestar, which was really nice. We were also taken to a hill overlooking the city and you could see the huge houses. It was amazing that we were so close to the city but practically in the countryside.

Shot at The Domain, Austin’s premier shopping and dining destination, Elle looks drop-dead gorgeous in her smart-casual dress from Bloomingdales and heels from Saks Fifth Avenue Off 5th.

Elle’s look was created at Grand Prairie Premium Outlets. Her natural make-up was courtesy of Alison at Origins, and her hair was by Jeris at The Salon, which are  both located at The Domain; a Simon property featuring luxury and
high-end retailers.

If I was a business traveller, I would prefer American Airlines because it’s a bit more private. It’s a 1-2-1 layout so wherever you sit you don’t have to step over anyone to get out. If you’re paying the premium to go in business then you want everything to be convenient. The food on American was awesome, it was like restaurant food. I had a proper beef fillet; you wouldn’t have known you were in the sky. British Airways was great too, and if I was selling to families or friends I’d say it was the best. The staff on BA were brilliant, really friendly and keen to help. It was obvious to others I’d not been in business class before because I was pushing all the buttons!