Sell Switzerland with Laura French’s guide to the country’s most spectacular lakes.

Chocolate, cheese, watches: Switzerland is positively brimming with goodies, and its riches are no less abundant on the lakes front. Several thousand of these beauty spots are scattered among the country’s snow-capped peaks and alpine villages, offering eye-popping patches of blue alongside a wealth of activities.

“A holiday beside a Swiss lake offers relaxing cruises along the water and the opportunity to stop off at charming villages,” says Alan Croft, commercial director at the Swiss Holiday Company. “In the lakeside resorts, visitors can swim in one of the lidos, which often have a small beach, or take a stroll along a lakeside promenade.”

Shearings says its bookings to Switzerland have risen 16% year on year, so now’s a good time to get selling with help from our guide to lakes for every client.

It would be sacrilege to talk about the Swiss waters without giving the sprawling Lake Geneva its dues. Set in the southwest corner on the border with France, it’s the country’s biggest lake and the largest in central Europe.

Rowing, paddleboarding, sailing and diving are all possible here, while the town of Montreux, set on its shores, offers its own treasures – a two-week jazz festival every July, the historic, fairytale-esque castle of Chillon, and several museums including waxwork attraction Chaplin’s World and music hub Mountain Studios, where Queen, David Bowie, the Rolling Stones and other music legends all recorded hits.

There are plenty of add-on, commission-boosting excursions available here too. Thomson Lakes & Mountains offers a trip on the Belle Epoque-style ‘chocolate train’, which takes passengers to the Cailler-Nestlé factory – where the world’s first chocolate bar was made – via the medieval, cheese-tastic town of Gruyère (from £37). Or for active types suggest a trip over to the 2,000-metre-high Rochers de Naye mountain, which offers picturesque gardens and postcard views over the Eiger and Mont Blanc peaks (from £25).

Classic Collection Holidays, meanwhile, recommends the Unesco-listed Lavaux vineyards for a tipple or two – especially in September, when the region hosts a festival celebrating all things wine.

Elsewhere on the shore lies the medieval, hilly city of Lausanne, worth suggesting to history fans with its picturesque old town and 12th-century Gothic cathedral. The region isn’t short on hotel options either. For those willing to push the boat out suggest Angleterre et Résidence, an upscale abode where Lord Byron stayed in 1816, or Chateau d’Ouchy, set in a historic castle right by the lake. 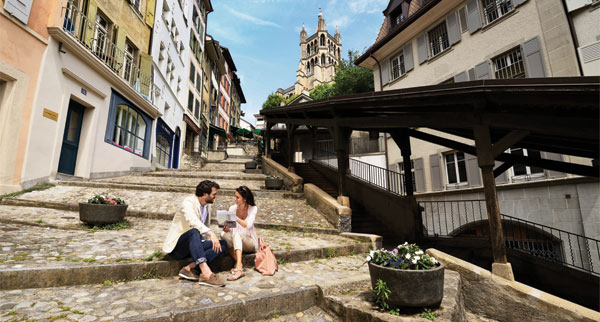 Closer to the centre of the country in the mountainous, picture-perfect (and Unesco-listed) Bernese Oberland sits the town of Interlaken, sandwiched between Lake Thun and Lake Brienz. “Interlaken is a great choice for an active break,” says Jodie Perkins, Inghams product manager for Switzerland and Germany. “Guests can enjoy activities such as canyoning, river rafting and kayaking, or take a lake steamer across the water to one of the many pretty villages.”

Nearby you’ll also find the limestone caves of St Beatus, made up of illuminated walkways alongside million-year-old stalactites and stalagmites, and the Giessbach waterfall, whose powerful rapids tumble down into Lake Brienz.

For a good base here recommend the five-star Hotel Beatus, which offers free excursions including guided walks, bike rides and boat trips on the western shore (from £1,314 for seven nights with Inghams).

If clients are on more of a budget, suggest Manor Farm Campsite, set on the edge of Lake Thun. Available through Eurocamp, the park is a hotspot for families, with windsurfing, canoeing, fishing and more available from a private beach, and walking, cycling and other activities on hand to appease outdoorsy types (a week costs from £1,480 for a group of up to eight, based on an August 15 departure).

Not far from there lies the smaller, quieter Lake Oeschinen, set just above the historic village of Kanderstag and considered one of the country’s most scenic lakes thanks to its emerald hues and breathtaking surroundings. Riviera Travel combines a scenic cable car ride over the lake with a stay in Interlaken on its Bernese Oberland tour. Guests will explore medieval towns and villages via the yellow post bus, the Jungfrau Railway and other iconic trains (from £1,549).

Those keen on exploring the area on foot could also look to Inntravel, whose self-guided Lake Oeschinensee & Beyond trip leads hikers through brightly coloured meadows, verdant forests and deep-cut valleys towards Blausee, a tiny dot on the map named for its enticing colour. 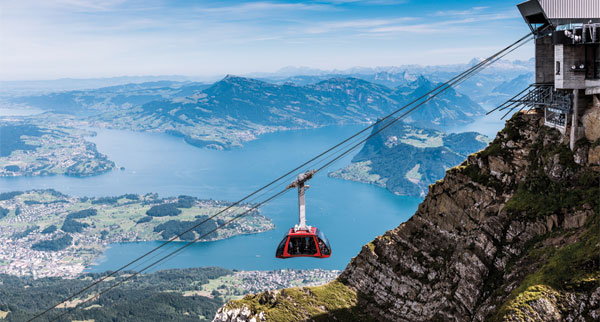 Northeast of all this lies Lake Lucerne, the fourth-biggest in the country and accessible from the historic, castle-topped city of Lucerne. “This is probably one of Switzerland’s most beautiful cities,” says Kathryn Morris, European product manager at Shearings. “It’s compact and easy to get around with beautiful architecture at every turn.”

The city has a rich heritage. As well as being home to Rütli Meadow, where the Swiss Confederation was signed in 1291, it’s also the location for the William Tell legend and has several restored, century-old paddle steamers which continue to shuttle visitors across the lake today. Active types will find something to please too, with sailing, waterskiing, diving and more all popular, and the soaring peaks of Mount Pilatus and Mount Rigi handily close by. 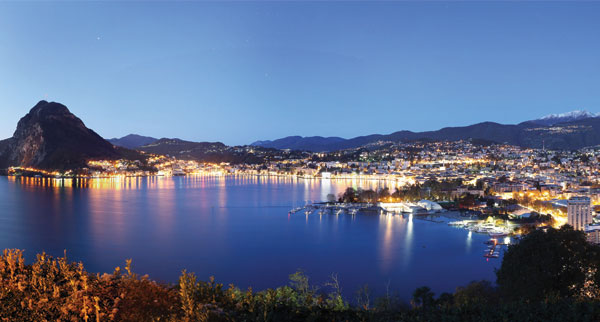 For a taste of Italian Switzerland, suggest the glacial Lake Lugano, located in the Ticino canton on the south coast and a stone’s throw from Como. Warm weather, Italian cuisine and verdant mountains give it a distinctly Mediterranean feel and there’s plenty to keep clients occupied thanks to vineyard tours, cooking classes and water sports alongside hiking and e-biking.

The city of Lugano itself, set on the northern shore, is chock-full of art galleries and Italian-influenced architecture. Recommend visiting at the end of June for the Lugano Jazz Festival, when a string of open-air concerts take to the streets, or in October for the ‘Festa d’Autunno’, celebrating local food and wine. Nearby, the fishing villages of Morcote and Gandria are well worth a look-in too; the latter, all quaint walled courtyards and historic narrow lanes, has barely changed in a century and provides a glimpse into the region at its most traditional.

For clients looking to combine the lakes into one, suggest a multi-centre rail journey. Great Rail Journeys’ Grand Tour of Switzerland combines Lugano with Lucerne, St Moritz and beyond, offering idyllic vistas over glistening waters, dramatic slopes and bottle-green valleys from the comfort of the Bernina and William Tell Express (from £2,995).