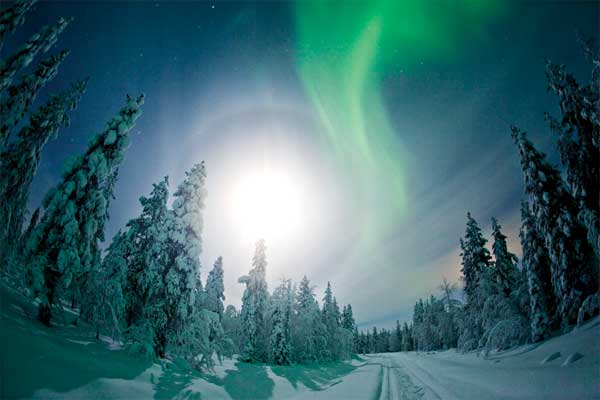 Santa’s not the only reason to book a snowy break to Lapland, discovers David Golledge.

A wisp of green in the starry night sky gave the first hint that we should keep our necks craned towards the heavens, and before we knew it, the sky was ablaze. Whatever the scientific explanation, the green pulses of the northern lights are truly otherworldly, and the only possible reaction is to look on, awestruck, at the spectacle.

Of all the activities we had in store in the resort of Levi in Finnish Lapland, perhaps the one with the highest expectations and least control is the search for the elusive aurora. Armed with plenty of advice on the best times and places to spot them, we were lucky enough not to need to go far, encountering this natural wonder right outside the hotel on our first evening in Finland. Reassuringly, however, as they appear on average 111 nights a year in Levi, the chances of a viewing are pretty good provided clients are staying at least a few nights.

That’s the evening entertainment sorted, then, but what is there to do by day? The range of snow sports and activities here is enough to sell a stay even without the added attraction of the lights, as long as you’re up to speed with what to do on an Arctic adventure. 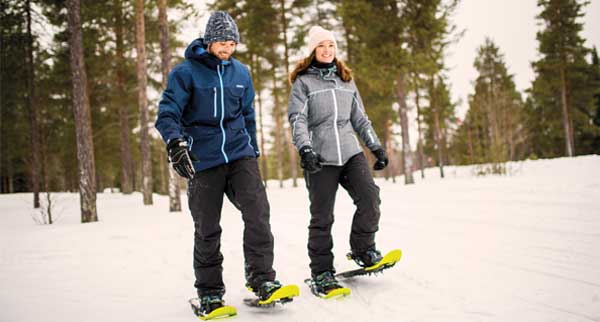 “So what happens if I take my snowshoes off?” I asked our guide, Mark. “Give it a go,” he replied, and I immediately plunged to my waist in the powdery white snow. I decided to keep them firmly on for the rest of the morning’s expedition.

Smaller than the tennis racquet-sized shoes I had expected, the nifty contraptions fastened around our snowboots, spreading our weight and, with spikes giving a tight grip, making it possible to clamber up and down the forest trails without too much effort.

From our vantage point on the mountain, snow stretched out through the trees as far as we could see. As soon as we started to climb this slope, it felt like being on top of the world, which is appropriate, since we were well within the Arctic Circle. It’s certainly cold this far north – the temperature rarely gets warmer than -10C and can reach -38C – but layered up and with snowsuits provided on arrival by local provider Lapland Safaris, we were more than prepared to explore the otherwise untouched spots. 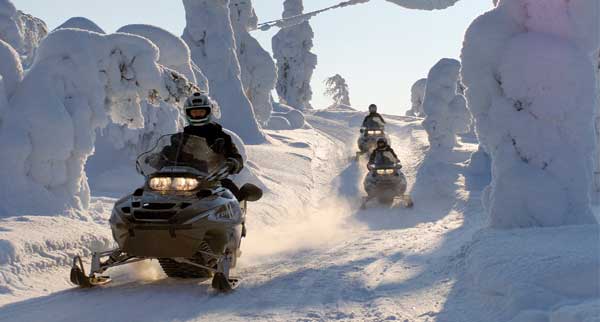 There is a chance for eagle-eyed spotters to see brown bears, wolves and even the odd lynx, but a far more common sight around Levi are the Lynx-branded snowmobiles, which seem to outnumber cars. Safety is taken seriously here: drivers must be at least 18 and have a full licence. They can also expect to be breathalysed before setting off, so anyone heading to one of Levi’s karaoke bars the night before should take it easy as there are hefty fines should you cause an accident.

After revving up, we crawled along on our new steeds through the resort’s winding trails; it’s surprising how quickly you get used to zipping across bumps in the snowy tracks. Being automatic, the snowmobiles have no gears to worry about: apparently, the trick is to lean in when cornering, although this is easier said than done.

“At these speeds, the wind-chill really kicks in, and even with thick gloves, I was grateful for the heated handlebars.”

We quickly hit Lake Immeljarvi, a stretch of ice almost a mile long and more than a metre deep, where we really put these fantastic machines through their paces. The speed limit on the lake is 60km/h, although for me anything above 40km/h felt more than fast enough. At these speeds, the wind-chill really kicks in, and even with thick winter gloves, I was grateful for the luxury of heated handlebars. Before we knew it, we were cruising through forest trails, up and down mountain slopes, and the drive was over far too soon. 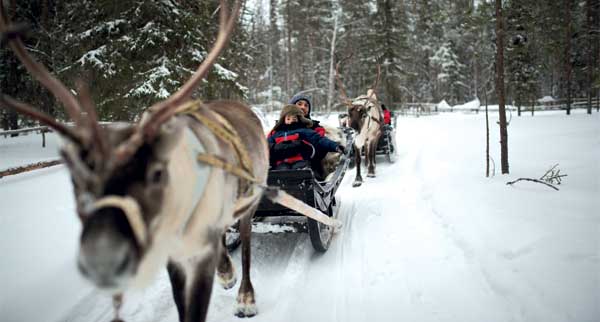 A different, more traditional way to get around is on the back of a sledge, pulled along by an excitable pack of huskies. It’s a family affair, with sledges pulled by different generations of the same family of dogs, all trained from an early age. Lined up on a starting grid, a simple spike digging in to the snow is enough to stop the well-trained pack from racing away.

After easing off the brake, the dogs quickly get up to speed and we were gliding over the tracks into the sunset in no time. Sadly, there were no heated handlebars this time. While I was grateful again for my thick gloves, the dogs seemed ecstatic in their natural habitat, adapting to the Arctic temperatures with an extra coat, which they shed before the warmer months.

Clients who prefer to move at a slower speed can let the reindeer take the strain. These animals definitely outnumber people in this part of the world, and a sleigh ride makes for a magical way to cruise through the forest. If you want to feed them, they are partial to a diet of local moss, which grows plentifully on the trees, and if you’re lucky enough, they’re even known to pose for the odd selfie!

With so much else going on, it’s easy to overlook Levi’s status as Finland’s most popular ski and snowboarding destination. With 43 well-groomed, snow-sure pistes, there is more than enough to keep beginner and intermediate skiers and boarders of all ages busy. The 28 lifts are mainly T-bars, with two gondolas and two chairlifts, yet minimal queues and quiet runs mean there are no delays in getting up and down the mountain.

Daylight hours are short, with darkness creeping in before 5pm in winter, but widespread floodlighting keeps some pistes open as late as 7pm. Furthermore, the 20-minute transfer time from Kittila airport to Levi resort centre is a fraction of the transfer time to most resorts in the Alps.

Those not wanting to hit the slopes can take the Levi Express gondola to enjoy a mountainside drink at an excellent vantage point, and check out the Samiland indigenous history and culture exhibition.

There are 150 miles of cross-country skiing tracks around Levi

Monarch offers a three-night Arctic Experience including reindeer or husky rides, snowmobiling, snowshoeing, a guided tour of the SnowVillage, and snow suit and boot hire. Prices start at £475 with a B&B stay at the three-star Lapland Hotel Yllaskaltio, or from £679 for full board at the four-star Levi Hotel Spa, based on two adults sharing and including flights from Gatwick or Manchester departing January 9, 2018. Guests can add a night at the SnowVillage from £199.
monarchagents.co.uk 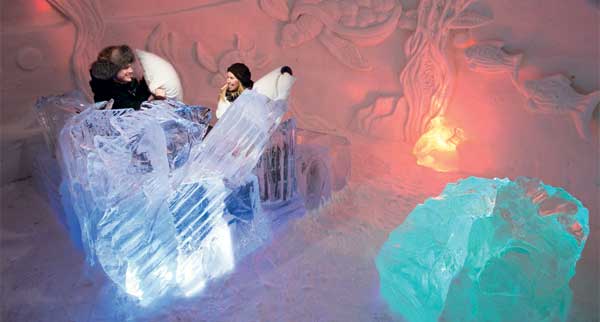 The Snowhotel is built afresh each year when the temperature drops to -6C and the ice on the river is almost half a metre thick. Adorned with ice sculptures and intricate snow carvings, it has 24 rooms, a bar and restaurant, and a chapel that hosts 50 weddings a year. The temperature doesn’t rise above -2C so guests wrap up in sleeping bags on normal beds for a one-night stay.
snowvillage.fi 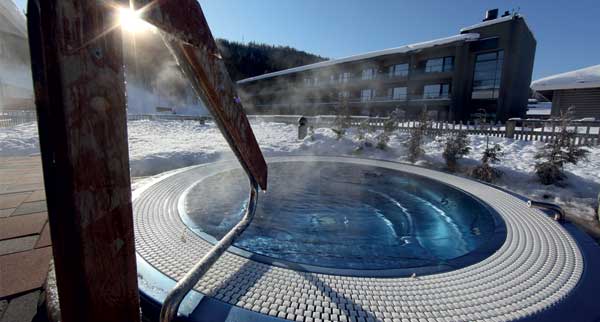 Set at the foot of pine-clad slopes, the Levi Hotel Spa is adjacent to the ski pistes, and in a convenient location just a short walk from the resort centre. Its 220 rooms are set within several low-rise blocks, ranging from cabin-style self-catered accommodation to high-spec suites boasting in-room saunas. The property is ideal for active families, couples and groups, with a superb range of facilities. The multi-level wellness and spa complex is particularly impressive, including a huge choice of pools and Jacuzzis, and a not-to-be-missed outdoor hot tub. Other on-site activities include a gym, bowling alley and nightclub. One of the spacious bar areas doubles as a pizzeria, with comfortable seating and quirky contemporary touches. The buffet cuisine in a separate dining area is plentiful, if somewhat limited in choice.
levihotelspa.fi/en