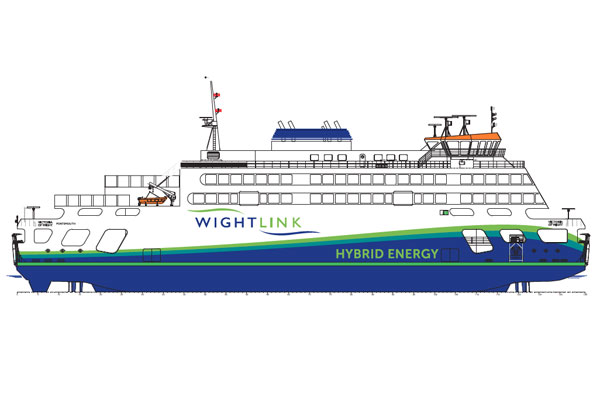 Victoria of Wight has been chosen as the name for Wightlink’s new £30 million car ferry.

The name was selected by a panel of staff who considered 186 suggestions from 73 members of staff.

Victoria of Wight will be a hybrid vessel, powered by batteries as well as low sulphur marine gas oil.

The new ship will be launched at the end of the year and arrive in the Solent next summer.

But the company has not yet decided when it will enter service on the Portsmouth-Fishbourne route early next year.

Environmentally friendly features on the new ship will include the recycling of hot water from the engines to heat the passenger areas and low energy LED lighting.

The ferry is being built at the Cemre shipyard in Yalova, Turkey, and Victoria of Wight will be officially handed over to Wightlink early in 2018.

The new vessel is part of a £45 million investment in the route.

New two-tier boarding ramps are already in use at Portsmouth and Fishbourne and have made loading and unloading of the ferry St Clare faster and more efficient, according to the Isle of Wight ferry firm.

Wightlink chief executive Keith Greenfield said: “Victoria was clearly a popular choice among staff. We were very happy to endorse their selection and feel Queen Victoria, as a regular visitor to the Isle of Wight, would have been amused.”

Five staff members submitted the winning suggestion for the naming. They have all won a trip to the Cemre shipyard to watch the launch of Victoria of Wight later in 2017.