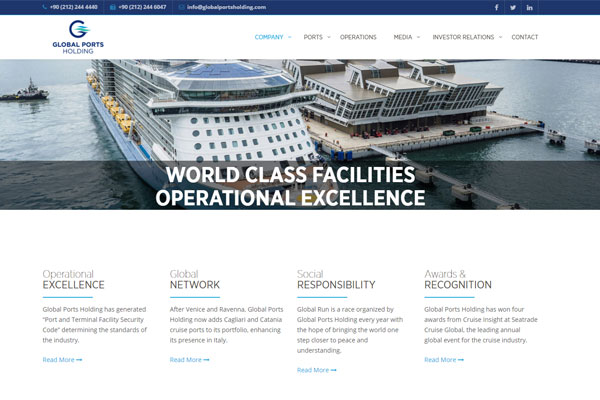 A slowdown in cruise traffic to Turkey was reported today by the world’s largest independent cruise port operator.

Global Ports Holdings saw strong overall cruise passenger number growth in the first half of the year but fell into the red.

This was impacted by “ongoing weakness in consumer sentiment towards higher margin Turkish cruise ports”.

The company said: “The unexpected decline in passenger volumes was due to cruise lines deciding on short notice to substitute Turkish ports – mainly with Greek island ports – due to negative perception of Turkey among foreign tourists.

“We remain cautious for the remainder of the year but expect a recovery in passenger volume in the mid-term because of the attractiveness of Turkish ports for cruise lines and passengers.”

The group’s cruise port profits fell by 25% year-on-year to $10.1 million, while an overall loss after tax of $6.7 million was recorded against a profit of $400,000 in the same period a year earlier.

The first half of 2017 saw 14.1% overall growth in total cruise passenger numbers to 1.53 million, driven by a combination of organic growth in Valetta in Malta and growth from first time consolidation of small Italian ports, according to the company.

The reporting period for the company, which includes Barcelona and Malaga among its ports portfolio, covered the low season first quarter of the year for Mediterranean cruises.

Chief executive Emre Sayın said: “While geopolitical developments have had a negative effect on our Turkish cruise revenues, our Turkish commercial segment is robust and has performed well.

“Our M&A [merger and acquisition] pipeline of international cruise ports remains strong with progress being made on a number of our target acquisitions and we will update the market as these progress.

“Our overall strategy of expanding our global footprint of cruise ports from the Mediterranean to the Caribbean and Asia remains on track.

“The result of this will be a reduction in the significance of our Turkish cruise port operation to our overall business.”

The company was listed on the London Stock Exchange in May, raising $73 million.